Even as organized racing occurred in 1800s Sydney and Melbourne, “out bush” in Australia, it was still wild and willful country. As Jessica Owers explains, good Thoroughbreds were often the getaway cars for bushrangers, and one in particular – the garrulous Captain Thunderbolt.

In 1867, it was brittle, scrubby country in the New England district of northern New South Wales. A man needed a good horse, a horse with a sure foot and even character. Often, it was a Stock Horse or Waler type, a sturdy animal that was correct and uncomplicated. But if it happened upon running down the bushranger Captain Thunderbolt, it was wildly outclassed.

Thunderbolt is a hero of the Australian frontier, a Ned Kelly of bush New South Wales. He was a bandit that rustled horses and held up the mail coaches, but he was also a fine rider and peerless judge of Thoroughbred. For more than six years, he slipped authorities across New England aboard fleet local racehorses, animals often scouted at race meetings. From 1863 to his death by shotgun in 1870, it is said he stole the fine racemare Beeswing, and district heroes Combo, Eucalyptus, Toy Boy, and Kerosene. His theft of the popular Tallyrand remains one of his best tales. 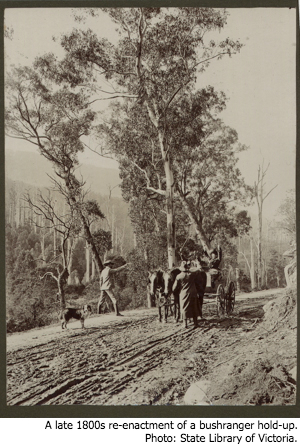 Thunderbolt had his regular beat across New England, country that was settled by stockmen, shepherds, and selectors. A bit like Robin Hood, he pushed his business among those that could afford him, and these were often station owners with the better bloodstock. One such character was Frank Wyndham, who managed Coolatai Station not far from the Queensland border. Tallyrand was Wyndham’s favourite racehorse, “one of the grandest old neddies that ever looked through a bridle.”

The races that Tallyrand won are long forgotten, but they were numerous. When he needed resting, Wyndham turned him loose on Coolatai, sending one of his boys to fetch him when it was time to put the horse back in work. Around 1867, however, Captain Thunderbolt decided he needed the horse very badly. But he also knew that Tallyrand was Wyndham’s favourite, so he sent word to the station master that he would return the horse in a number of weeks, which he did.

Tallyrand made it back to Coolatai in excellent fettle, albeit tired. During his time with Thunderbolt, he had carried the famous bushranger hundreds of miles across burnt bush land, and had run like the clappers for much it with mounted police and trackers on his tail. It is said that Thunderbolt raced the horse among the picnic meetings while he had him, something he had also done with the district gelding Minstrel, who had won £190 in prizemoney the day he was stolen. But much of this is legend now, impossible to prove.

Captain Thunderbolt was born Frederick Ward around 1835. He was the son of a convict father, and the family had settled in Maitland, in the Hunter region, when he was almost a teenager. He had shown he was gifted with handling horses from a very early age, and in another life he might have been a jockey or trainer. Instead, rustling horses earned him faster money, and he became very good at it.

For a time, Thunderbolt worked as a stockman and horse breaker on Tocal Homestead near Maitland. Tocal, which still exists today, was a centre of Thoroughbred excellence, and it stood the stallions Goldsborough, The Drummer, and Splendor. During Thunderbolt’s era, it was home to the 1856 English Grand National winner Freetrader, as well as 1866 Melbourne Cup hero The Barb. Both are said to have been annexed by Thunderbolt at one time, but no one knows if this is fiction.

The stable block at Tocal is still standing, reinforced with heavy bars and locks, suggesting both the value of its one-time inhabitants, and an era when Captain Thunderbolt knew a good horse. It is likely that Thunderbolt’s good eye for Thoroughbreds was developed during his time at Tocal, and it served him well. His penchant for blood horses resulted in his being on the run for the longest period in bushranging history. 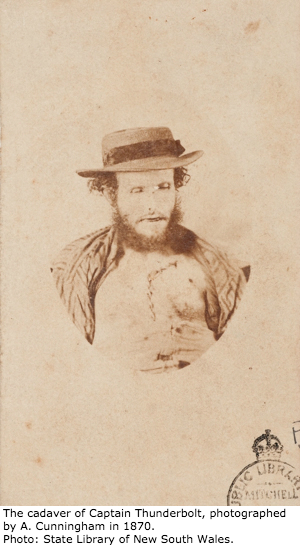 Thunderbolt’s criminal career began, ironically, at Tocal Homestead. Operated then by reputed breeder Charles Reynolds, who would later play a hand in the first stud book of New South Wales, much of the Tocal stock were the finest blood horses north of Sydney. They were also branded. Ward was about 20 years old when he, along with a few others, drove a large string of stolen horses, many of them Tocal stock, to saleyards a long way south. Caught and convicted of horse theft, Ward got 10 years at notorious Cockatoo Island prison in Sydney Harbour. When he emerged early it was 1860, about the time Australia was poised for its first Melbourne Cup.

Ward was an unconventional criminal. He was thickset with a beard and swarthy complexion, of chatty disposition, and impossibly polite. No one expected him to be Captain Thunderbolt when they met him. He never held up the battlers, and across New England he had working-class friends that constantly sheltered him from the law. Often, he engaged in lively conversation with those he held up. One such unlucky fellow was hotelier J.N. Roper, of Bonshaw Hotel on the state’s border.

Roper had just bid the local constable, who had set off with the mail coach, cheerio when Thunderbolt rode up. It was 1867, and over several hours, the bushranger helped himself to cash and goods, keeping Roper in fine conversation about his choice of lifestyle. He explained to the hotelier that the straight life wasn’t for him, and then he paid for a round of drinks before riding off.

“Constable Langworthy wanted to follow Thunderbolt,” recalled Roper in a letter about the incident. “But I told him ‘twas no use with the horse he had. ‘Tis a second or third rate animal, whereas Thunderbolt is riding the finest horse I have seen in the district.”

Australian blood horses of that era were probably the finest they’ve ever been. By Thunderbolt’s years, the influence of the Melbourne Cup had crept up through New South Wales. The Barb (and Sydney legend Yattendon) was by the boom sire Sir Hercules, arguably the greatest staying stallion in old Australia. His progeny were tough, fast, and sound, and they were found all over regional districts. They were, as Thunderbolt knew, fleeter than any police or station mount, and they were the key to his freedom for six long, lawless years. 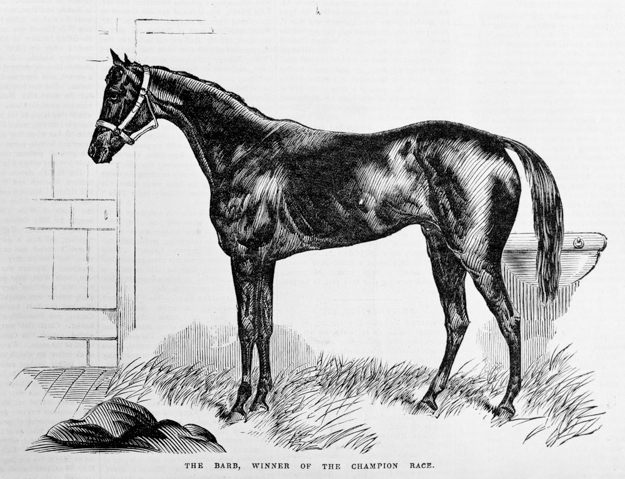 It isn’t well documented, but Australian racing has a quirky relationship with bushranging. Thoroughbreds were the getaway cars of the mid-1800s, and if they could be got to, they were. The Barb was certainly stolen as a very young horse, though probably not by Captain Thunderbolt, and it wouldn’t have been a good time for the thief. Known as the “Black Demon,” The Barb was an ornery character that bucked faster than a housefly. He remained a handful during his glittering career, but he was worth it. Had Thunderbolt managed to annex The Barb, he might have outrun the law a little longer.

As it happened, his luck ran out in 1870 at Kentucky Creek, just outside of Uralla. After a pursuit, he was fatally shot by a police constable, and his body was hauled in for an autopsy. His legend met a different fate, climbing into the space reserved for defenders of the down and dispossessed. Essentially a good sort of a man, Captain Thunderbolt happened on a misspent life, albeit one misspent aboard very fine Thoroughbreds.