Few people today would associate London with horse racing. Nonetheless, over the past two centuries there have been several attempts – some more successful than others – to establish the city as a centre for the sport. As part of a continuing series about lost racecourses, this article looks back on four former tracks that played their part in bringing racing to the capital and its environs.

When John Whyte, an entrepreneur, announced his intention to build a racecourse in Notting Hill in west London, he was met with scepticism. At the time, Notting Hill was infamous as a haunt of ruffians and thieves. Whyte, however, saw an opportunity to create a racecourse within easy reach of London’s masses.

He leased a 140-acre plot, which he ringed with a seven-foot-high wooden fence and laid out three tracks – one for flat racing, another for steeplechasing, and a third for pony-and-trap racing. There was stabling and boxes for 75 horses and Notting Hill itself, at the centre of the course, was a ‘natural grandstand’. 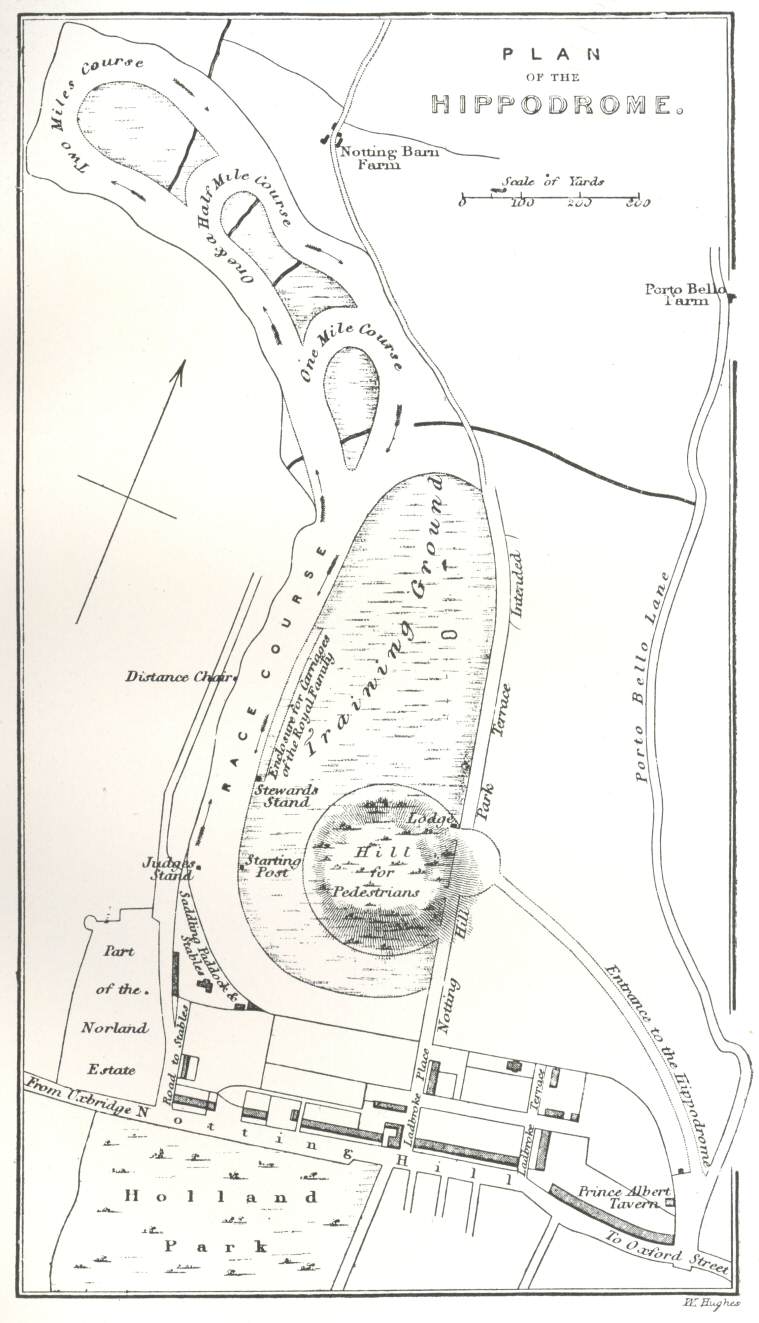 Upon its opening on June 3, 1837, The Sporting Magazine waxed lyrical: “The most perfect racecourse that I have ever seen … a racing emporium more extensive and attractive than Ascot or Epsom.”

Nonetheless, the Hippodrome immediately met fierce opposition. Adjacent to the track was ‘the potteries and the piggeries’, a notorious slum accessed by Pottery Lane (known colloquially as Cut Throat Lane). Historically, those with any sense had taken a shortcut over the hill to avoid a grizzly fate. Whyte’s fence blocked access to this route, which swiftly angered the local population.

On June 3, with a mixture of righteous indignation and glee, locals cut a hole through the wooden paling and spilled onto the track. Of the estimated 12,000 to 14,000 in attendance, one commentator asserted that ‘some thousands thus obtained gratuitous admission’.

Protests continued to mount, as complaints against violence at the track and Whyte’s gambling and drinking licences were lodged. This sullied the reputation of the track and reduced its appeal to fashionable patrons.

But Whyte’s track faced a more fatal flaw: it was sited on clay soil. The heavy-going surface deterred the best jockeys and prevented the course being used for much of the year.

In May 1842, Whyte cut his losses and relinquished his lease of the land. By the end of the decade, houses had been built over the ill-augured course 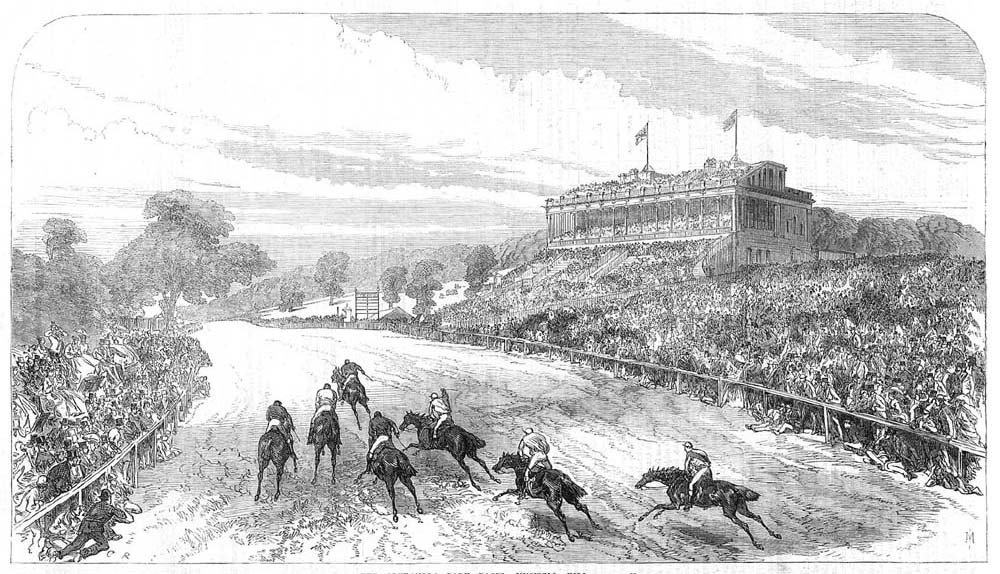 ‘Epsom rejoices in its vast crowds and its unbounded licence of fun and frolic; Ascot rejoices in the presence of Royalty and the patronage of fashion. Goodwood is proud of its scenery and Doncaster claims to be par excellence the sporting town of England. The Alexandra Park meeting commends itself to popularity upon different grounds. It is within 15 minutes’ drive of the City by railway, but, while it seeks the shillings of holiday makers, it carefully excludes roughs, and its situation is sufficiently picturesque to allure those for whom races alone possess few attractions’.

Alexandra Park Racecourse opened for its first public meeting on June 30, 1868. The two-day event was a success, attracting a crowd of over 40,000. Situated in the grounds of Alexandra Palace, the racecourse formed part of a public leisure complex and it soon gained the affection of Londoners and racegoers from further afield, notwithstanding its unconventional track.

Squeezed onto a narrow hillside plot, the racecourse was described as ‘the most peculiarly shaped course in Britain’. Still visible today is the circular loop with its long ‘chute’ handle, which gave rise to the track’s nickname - The Frying Pan.

As the track prospered, improvements were made. In 1896, the loop of the course was enlarged, the straight was straightened, and a watering system was installed. A new paddock was laid out, while the Tattersalls Enclosure was banked to provide a better view.

Following World War II, interest in Alexandra Park slowly began to wane. In 1955, perhaps as a means to reverse this trend, evening meetings began, but this added new dangers to an already risky course. Those unfortunate enough to run in the last race of the day rarely had enough light to see by. Injuries were common.

Jockeys might still be hurtling round the Frying Pan if it were not for the decision of the Horserace Betting Levy Board to withdraw support for the course. Racing at the track slowly fizzled out as the 1960s drew to a close until it shut, finally, in September 1970.

The Victorian grandstand was torn down and the stables demolished. While various proposals to revive racing at the track have come and gone, only the outline of the track, marked by footpaths, trees and a few surviving racing posts, remains. 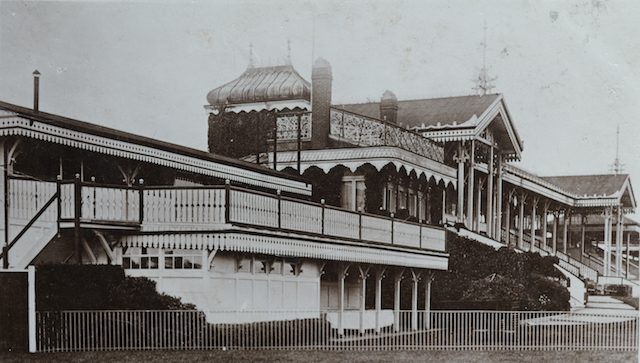 Horses began racing on Mousley Hurst, a grassy park on the banks of the River Thames near Hampton Court Palace, in the early 1700s, but it was not until 1814 that a formal meeting was established.

Called the Hampton Races, the annual event grew into a major festival. By the middle of the 19th century it was reportedly attracting over 100,000 revellers daily and Charles Dickens immortalised it in Nicholas Nickleby as a place of swindling, drinking, pickpocketing, begging and gambling.

This unruliness, combined with poor maintenance, led to its downfall. In 1887, the Jockey Club refused to sanction any more meetings. However, a group of wealthy investors swept in with plans to smarten up the course, attract a more discerning customer and thereby earn a profit.

Elaborate stands were built, featuring ornate ironwork and facilities of the highest quality. Stables and rings were added, and the track was levelled and improved. Conceived as a sort of country club, every means was taken to provide luxury, convenience and amenity.

National Hunt racing began on 19 March, 1890, and, after extensive improvements to the course, flat racing was held the following year. For the next 72 years, bar the interruption of the two world wars, the racecourse flourished.

The track did, though, nearly meet a premature end. On June 8, 1913, a policeman cycling through the village caught sight of flames tearing rapidly across the racecourse. In the suffragette cause, two women – Kitty Marion and Clara Giveen – had set fire to the much-loved racecourse. The Grandstand, Members’ and Tattersalls Stands were left gutted.

Hurst Park, to its great credit, made the racecourse ready to accommodate the next planned race day only six weeks later.

Upon recovery, Hurst Park thrived and many improvements were made. The Old Tattersall’s stand was demolished and supplanted by a lavish £35,000 replacement, and modern equipment – totalisators (among the first in England) and a photo finish – were installed. Crowds would throng to the course, reaching as many as 50,000 on Whit Monday in the spring.

In the end, it was not declining ticket sales or lack of funding that led to Hurst Park’s downfall; it was profit.

For its proprietors, Hurst Park was a business venture, and it had become clear that more money was to be made from property development onsite than from racing. Despite vigorous opposition, in 1962 the racecourse closed.

Everything that could be uprooted was auctioned. The turf went to Ascot, the 95-foot grandstand to a local football club, the railings to a dog track. And Hurst Park was no more.

How many of the millions of travellers passing in and out of Gatwick airport each year know that the site was for 50 years a racecourse? Strategically placed alongside the London to Brighton railway line with its own dedicated station, Gatwick Racecourse opened in October 1891.

The track boasted a grandstand, members’ stand and, from circa 1903, a railed parade ring – the first known example. The station was provided with sidings to allow horses to arrive by train, while patrons could use the covered walkways that connected the station to the racecourse.

Gatwick’s main claim to fame was its service during the First World War. In 1915, the War Office commissioned Aintree Racecourse for use as an airfield and aircraft assembly depot, and Gatwick was identified as an interim host for the country’s most prestigious steeplechase, the Grand National.

A special course was constructed, with 29 fences laid out under the supervision of five leading jumps trainers, and in 1916 it hosted the ‘Racecourse Association Steeple Chase’.

There were 21 runners and, despite the travelling restrictions in place across the country, the event was well attended. Upon its second running in 1917, it was renamed ‘The War Steeplechase’.

The final War Steeplechase, on 21 March 1918, was won by Ernie Piggott (Lester Piggott’s grandfather) on Poethlyn, the horse that won the Grand National a year later when the race was restored to its rightful home at Aintree.

Gatwick remained popular during the inter-war years. On racedays some 26 trains between London and Brighton made additional stops at the racecourse, and the venue drew many visitors, jockeys and owners.

Ironically, it was the railway line that led to its closure. The rail link made recreational aviation on the flat site commercially viable (a private aerodrome opened next to the racecourse in August 1930). It was usually free of fog, unlike London’s other satellite airports, and therefore recommended itself for development. Passenger aviation was introduced in 1933.

With the advent of the Second World War, the RAF requisitioned the rapidly growing airport into national service. Racing stopped at Gatwick, and in 1941 its track was also claimed – two new runways were soon built over it, to support missions over the English Channel. In 1946, what remained of the racecourse passed into the control of the Ministry of Civil Aviation.