It was New York's run to glory. Starting each February, four stellar stakes races paved the way to the Kentucky Derby. The series kicked off with the six-furlong Swift, then the seven-furlong Bay Shore, followed by the one-turn mile of the Gotham Stakes, and finally, the mile-and-an-eighth Wood Memorial.

Derby horses were often minted in the graded Gotham Stakes. One train after another arrived at Locust Manor Station from all parts of New York. Racing fans scooted off the platform to the pari-mutuel windows laying down their bets on the daily double. The Gotham was initially staged at Jamaica Racetrack (1953-1959) in south Jamaica in the borough of Queens, but when the venue was shuttered, the Gotham moved to the nearby and newly renovated Aqueduct Racetrack in 1960. 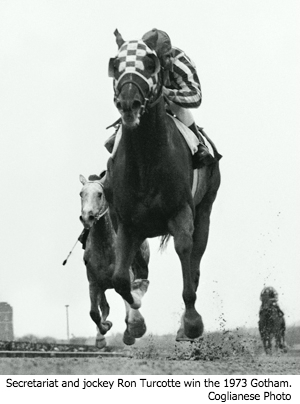 For some, the term Gotham City is forever linked to the Batman comic series of the 1940s. The setting of Batman's adventures, the creators changed the locale from Manhattan to the fictional Gotham City.  However, the nickname harkens a lot further back. The term Gotham was originated in 1807 by Washington Irving, best known for his short stories "The Legend of Sleepy Hollow" and "Rip Van Winkle." Irving penned the moniker in a satirical piece in the literary magazine Salmagundi. Somehow the name stuck to New York City.

The great Native Dancer turned up for the inaugural running of the Gotham Stakes on April 18, 1953. The attraction was so strong for horsemen that the race was split into two divisions. With Eric Guerin in the irons, Native Dancer easily won the first division, while less famous Laffango took the other.

On a damp, foggy day in 1967, a crowd of 50,522 crammed into the "Big A" to witness the first showdown  between rising star Damascus and his challenger, Dr. Fager. The Gotham would prove to be the start of their fierce two-year rivalry - the duo split evenly the quartet of races in which they both competed.

Having his pick of the two, legendary jockey Bill Shoemaker opted to stay on the muscular Damascus, whom he had ridden to four victories before the Gotham. Known for his toughness, versatility, and durability, Damascus’ accomplishments  were superb in a decade full of remarkable racehorses.  During a sensational 3-year-old season the colt scored 12 wins from 16 starts and went on to be named champion 3-year old.

Dr. Fager was bred at Tartan Farm in Ocala, Florida in 1964 by William L. McKnight, the chairman of the board of 3M corporation.  Sired by 1951 Santa Anita Derby winner Rough ‘n Tumble, his trainer John Nerud was a former rodeo cowboy from Nebraska who served in World War II. In the 1950s Nerud began making noise in the Thoroughbred game as Tartan Farms' conditioner and general manager.

In 1965, Nerud was chasing a runaway horse when he was tossed from his stable pony, landing squarely on his head. After downplaying his fainting spells and slurred speech for a month, Nerud's wife Charlotte insisted that he travel to the famed Lahey Clinic in Boston. Nerud was diagnosed with a life threatening blood clot on his brain and was operated on by world renowned neurosurgeon Dr. Charles Fager. A couple of months later the future Hall of Fame trainer named a promising colt after the neurosurgeon who had saved his life.

"I didn’t know a horse trainer from a lion tamer at that point, " Dr. Fager recalled in an interview for the New York Times blog, The Rail. "Later Nerud called me and asked if he could name a horse after me. I said sure, what horse is it? Nerud said he didn’t know... then one day a package of papers from The Jockey Club arrived. I had to sign a release giving my consent to having a horse named 'Dr. Fager.' So I signed the papers and sent them back."

Dr. Fager was a freak before the label was coined. He put away swift horses with relative ease. Headstrong and maniacally competitive, any horse that dared to pass him risked being lunged at and savaged. When the leggy bay wanted the lead, there was no one to stop him.

"He could punch a hole in the wind," marveled his regular rider Braulio Baeza.

Brazen and self-confident, Nerud was a mirror image of his fiery trainee. A blood infection kept the colt out of action in Florida in early 1967 so the trainer headed to New York in the early spring. But, when Nerud couldn't find the proper race for his colt before the Gotham Stakes, the trainer set up a public six-furlong workout. Dr. Fager was clocked at a blistering 1:10 1/5.

The betting crowd for the 1967 edition called it even, making Dr. Fager and Damascus co-favorites at 13-to-10 for the one-mile Gotham Stakes. When the gates slammed open, Damascus broke like a shot from the outside. Dr. Fager gained good position down on the inside. By the quarter pole, speed horse Royal Malabar was cooked. Rocketing down the stretch, Dr. Fager and Damascus matched strides and drew clear of the field. Edging away, Dr. Fager flashed under the wire victorious by a half-length in a time of 1:35 1/5. Game on. The fabled Dr. Fager vs. Damascus showdowns had begun.

Nobody swept through the Kentucky Derby, Preakness, and Belmont Stakes with the same power and flair as Secretariat in 1973. The Meadow Stable chestnut's road to the spring classics began in New York where he made his 3-year-old debut in the Bay Shore Stakes, triumphing despite being bumped and suffering traffic problems. Heading into the Gotham Stakes, trainer Lucien Laurin changed tactics. "Big Red" was sent to the lead, abandoning his typical robust closing rush. The 1-to-10 favorite defeated a field of six horses, pulling away by three lengths over familiar rival Champagne Charlie to set a stake and track record for the mile in 1:33-2/5.

Secretariat's Gotham Stakes record would stand until 1989, when the reigning 2-year old champion Easy Goer -- the chestnut son of Alydar and Relaxing -- turned up at Aqueduct's main track on April 8.

Easy Goer did not disappoint. A homebred owned by Ogden Phipps and trained by Shug McGaughey, Easy Goer uncorked the fastest mile ever in New York state, whipping a badly outclassed field of four. Jockey Pat Day barely stirred in the saddle as Easy Goer stormed home the victor by 13 lengths in the Gotham. The early Kentucky Derby favorite set track-record 1:32 2/5, one-fifth of a second off the world record for the mile set by Dr. Fager in 1968 at Arlington Park

Easy Goer went off at 1-to-20. The Gotham victory was worth $168,300 and pushed Easy Goer past the $1 million mark after eight starts. In the winner's circle, jockey Day cracked: "Now what do you think he would do if I asked him to run?"

----
Several sources were used in the writing of this article, including: