In the context of everyday life, seven years can feel like a very long time. In the context of sport, however, seven years is nothing. The seasonal nature of it means that time goes by in the blink of an eye. It is hard to believe that next year will mark seven years since the London 2012 Olympics, and in horseracing terms, the retirement of the great Frankel.

A sporting event that only has seven renewals under its belt is still very much in its infancy. Most of Britain’s well-loved sporting institutions – Royal Ascot, Wimbledon, the Ashes, to name but three – have become part of the fabric of the country over generations, even centuries. It is impossible to imagine Britain without these occasions because they have been around for longer than any of us, and their champions are written deep within the history books.

They generate levels of interest that transcend their individual sports, which must be the ultimate goal of any new sporting event.

It is therefore remarkable to think that, just seven years after its inception, a conclusion to the British flat season without Qipco British Champions Day is barely imaginable, not only for racing fans, but also for general sports fans and social racegoers, who can now point to and embrace a headline-grabbing season finale.

The plan proposed by the racing authorities in 2010 was an ambitious one: the G1 Champion Stakes was to be moved from Newmarket’s Rowley Mile to the hallowed turf at Ascot, along with the previously named G2 Pride Stakes (Fillies & Mares) and G3 Jockey Club Cup over two miles. Meanwhile, the G1 Queen Elizabeth II Stakes over a mile and the previously named G2 Diadem Stakes over six furlongs were to be pushed back three weeks to join the three aforementioned contests on their mid-October date, giving the end of the British flat season a fresh format.

With the support of an enthusiastic and committed sponsor, the new raceday was christened Qipco British Champions Day. The aim was simple: to create an appropriately celebratory end-of-season raceday with enough prize money on offer to ensure world-class action on the track.

This was to be a day on which Britain would crown the champion older horses across all divisions – sprint, mile, middle distance, long distance and filly and mare – as well as to look back on the winners of each division’s most valuable contests throughout the season, which would form the new Qipco British Champions Series, to be staged at ten of Britain’s best-known racecourses.

Those courses, alongside Great British Racing, became shareholders in the venture, and in turn the proprietors of the Ascot showpiece. To that end, this was to be a raceday owned by British racing, to celebrate the best of British racing.

In anticipation of another sparkling renewal next month, we take a look at the reasons why the day is wholly deserving of the title of ‘The Ultimate Raceday’. 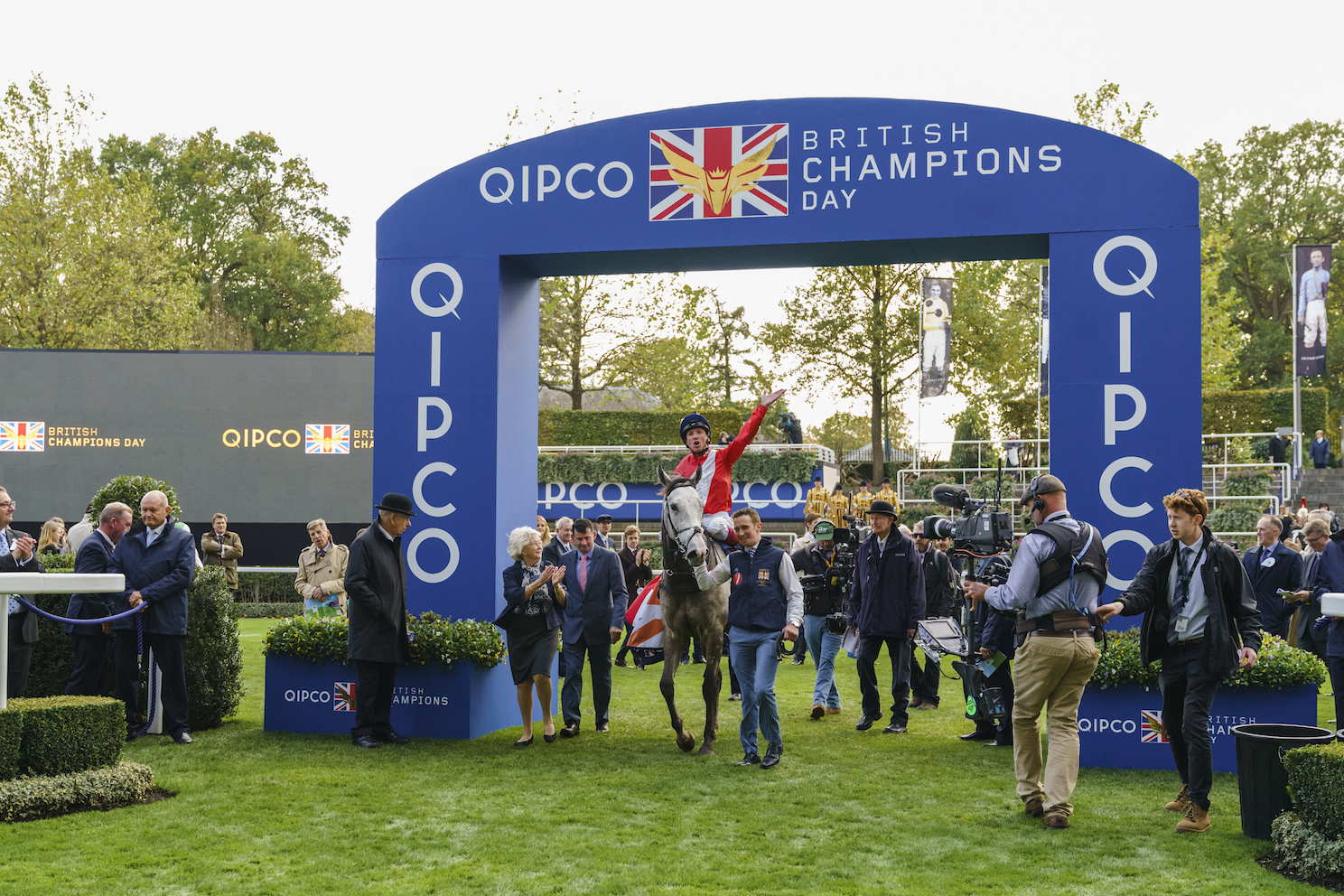 Qipco British Champions Day received worldwide interest from the outset, thanks in no small part to Frankel. The world’s highest-rated ever landed the Queen Elizabeth II Stakes (sponsored by Qipco) at the inaugural renewal in 2011, then backed this up with victory in the Qipco Champion Stakes the following year.

Increased prize money year on year, from £3 million in 2011 to £4.35 million this year, has ensured stellar line-ups ever since. When entries for the 2018 renewal of Qipco British Champions Day were released in early August, record-breaking trainer Aidan O’Brien commented:

“Qipco British Champions Day is a meeting where the standard is always very high, the best horses are taking part and the races are hard to win.”

Indeed, the day has become a stand-out on the global racing calendar, being the only British raceday to stage four G1 contests on the same afternoon. The G2 Qipco British Champions Long Distance Cup is consistently top-level in nature if not yet in name, courtesy of its prize fund and the fact it is run under G1 conditions, and the Balmoral Handicap – Europe’s richest mile handicap – is always a fiercely competitive contest with which to round off proceedings. 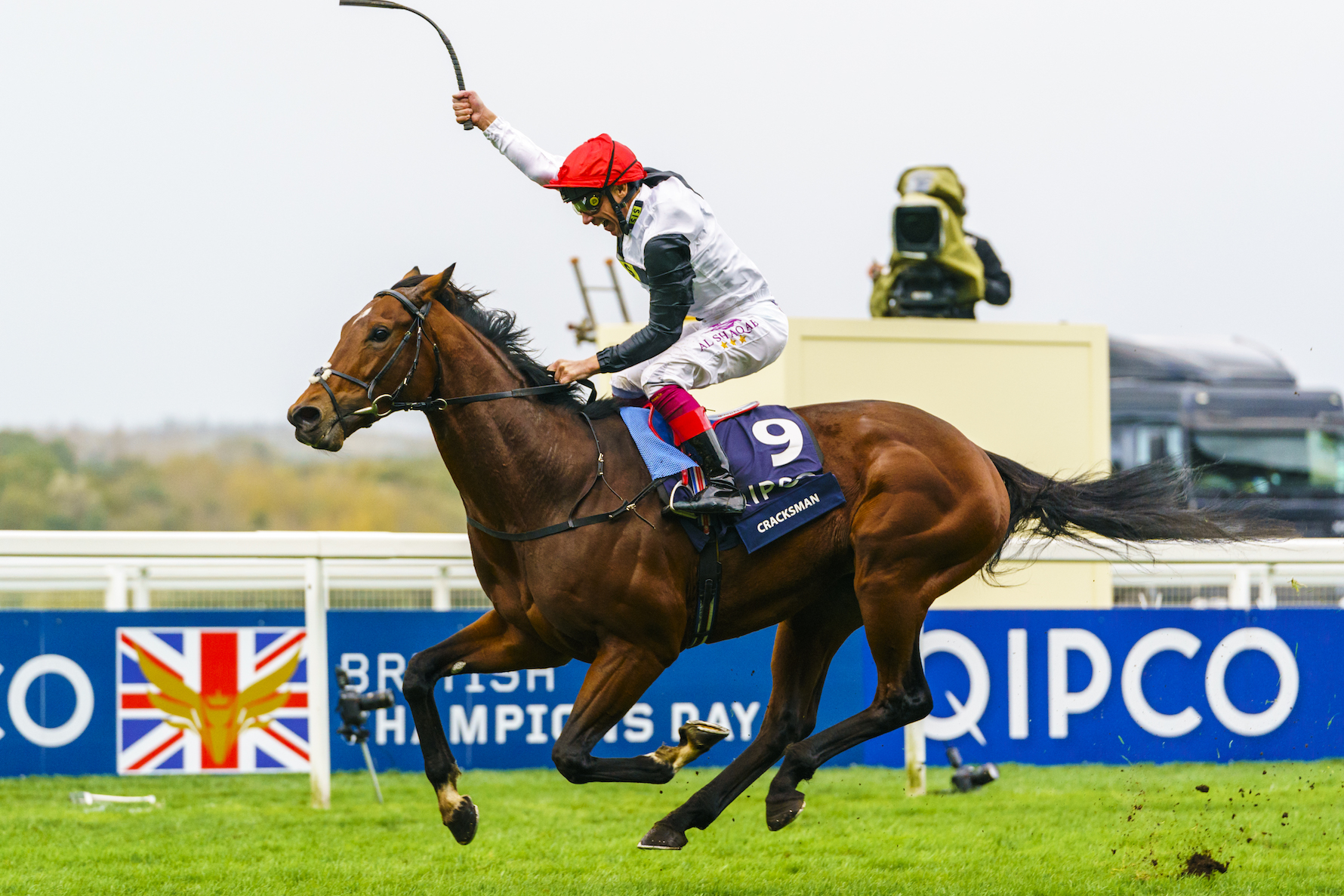 The G1 contests have been creeping up the Longines World’s Best Race Rankings each year, with the Qipco Champion Stakes, the Queen Elizabeth II Stakes and Qipco British Champions Sprint Stakes all featuring within the top 30 races of 2017. No other race meeting in the world – let alone a stand-alone raceday – could claim more than two of the top 30.

The Qipco Champion Stakes, in particular, was a remarkable spectacle, with Anthony Oppenheimer’s homebred Cracksman producing a performance that earned him a rating of 130, the highest in Europe last year.

When speaking to Qipco British Champions Series in August, Oppenheimer said: “Cracksman was absolutely in his element last year and it was a marvellous day. There’s no question the race will be considered … He’s had a long rest. As long as it’s good ground or good to soft, he’ll run, probably. He’s going to run in the Arc, too, but he can do both.”

Indeed, this year’s renewal of the end-of-season showpiece has all the necessary ingredients at this stage to live up to its already lofty reputation. The entries, which include Cracksman, Roaring Lion, Battaash and Crystal Ocean, have won a phenomenal 77 G1s and 16 European classics between them..

Ascot Racecourse provides a show-stopping backdrop to a raceday: the dramatic grandstand is recognisable the world over, the history of the turf brings back memory upon memory of battles between the very best Thoroughbreds from home and abroad, and the amphitheatrical parade ring lends itself magnificently to ceremonial touches throughout the day. It all combines to produce an electric atmosphere among those lucky enough to be present.

Indeed, it is the action in the parade ring and around the course, as well as that on the track, that sets Qipco British Champions Day apart from other racedays.

The curtain rises with an opening ceremony that throws the spotlight on the champions of Qipco British Champions Series races throughout the summer. Minds are cast all the way back to the first two British classics, the Qipco 2,000 and 1,000 Guineas at Newmarket’s Rowley Mile in early May, as flags representing the series winners’ silks are paraded by students of the British Racing School.

The nation’s human sporting champions have often featured in the opening ceremony, too, adding a touch of surprise and delight when riding in on the back of open-top Porsche cars.

Porsche, a partner of Qipco British Champions Day, adds further to the day’s atmosphere when giving away a VW Polo to one lucky racegoer before the presentation of the Champion Stakes. The energy around the parade ring at this point in the day, immediately after what is always one of the contests of the season, has to be seen to be believed. 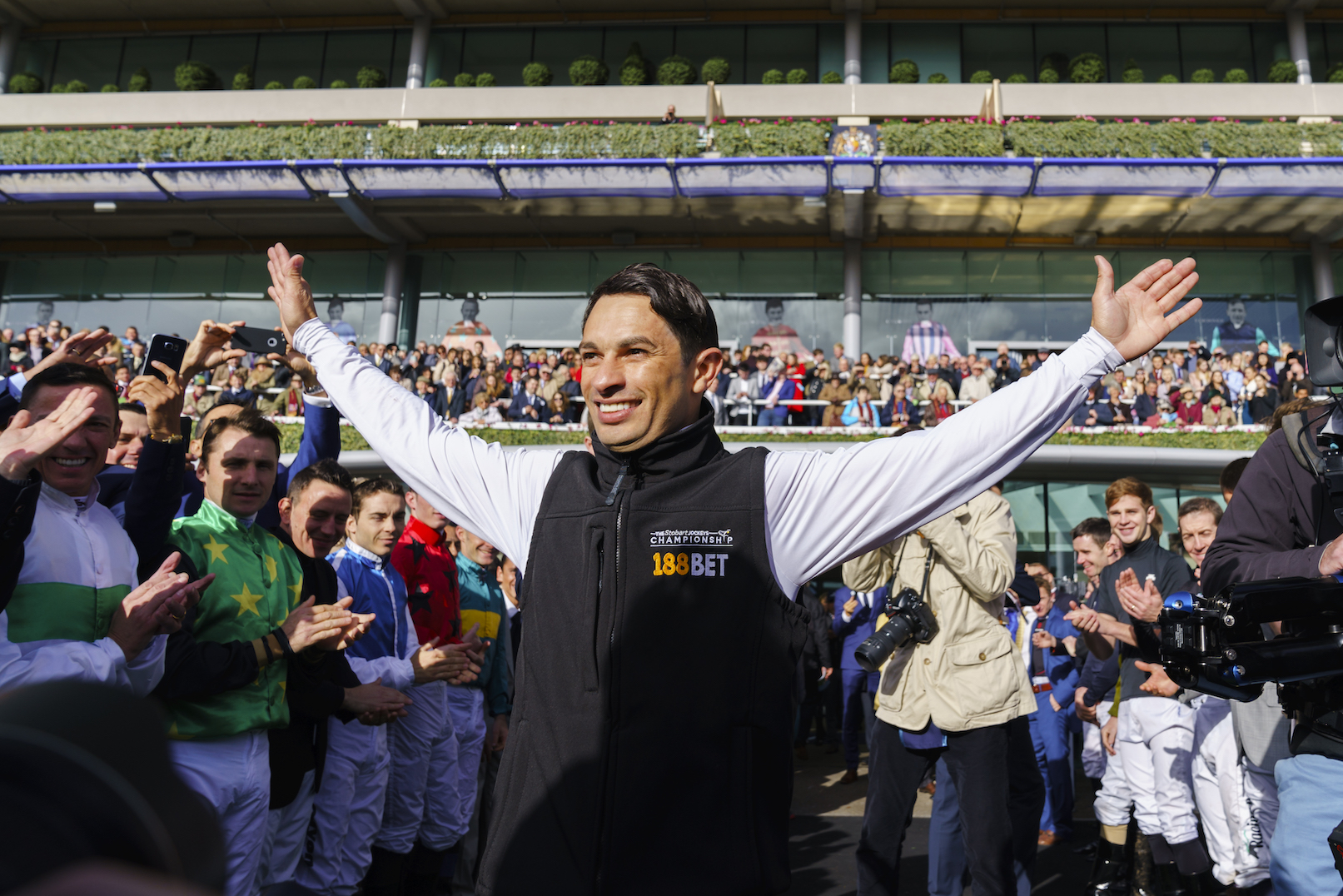 While the afternoon’s action revolves first and foremost around the horses, Qipco British Champions Day also provides a perfect platform for acknowledging and celebrating the season’s most successful men and women.

The crowning of the Stobart Champion Jockey showcases the camaraderie between the members of the weighing room, as those riding on the day create a guard of honour for the champion. It looks inevitable that this year’s prize will go to Silvestre de Sousa for a third time; at the time of writing, the brilliant Brazilian is 36 clear of his nearest rival.

The Champion Owner presentation, made after the Queen Elizabeth II Stakes, has been a particularly popular spectacle with the crowd at each renewal so far - as the trophy has been handed over by The Queen herself.

Then, once the races are run and the champions are crowned, the racecourse comes alive with music as one of Britain’s chart-topping artists brings the curtain down on the day.

The after-party has not been without its challenges: the location was changed last year to improve capacity and crowd flow, and to allow those attending purely for the action on the track to enjoy the grandstand in peace post-racing, yet progress was frustratingly knocked back when high winds prevented organisers from being able to open the sides of the structure.

The Champion Stakes meeting at Newmarket drew a crowd year on year of about 14,500. Since the switch to Ascot, around 30,000 racegoers have turned out each year. Last year’s attendance was the greatest since 2012, when ‘Frankel fever’ gripped the nation, clocking in at an impressive 31,187.

The crowd is a diverse one. Not only is there the expected legion of true racing fanatics, but there is a real emphasis on attracting social racegoers and general sports fans, the aim being to extend racing’s appeal far beyond its usual boundaries and take it into the realms of those aforementioned occasions that transcend their particular sport.

Facilities such as the trackside Alpine Bar (new for 2017), with its live saxophonist and DJ, bring these social racegoers up close and personal with the action on the track, while the lack of a Royal Ascot-like dress code appeals to those who prefer to take a more relaxed approach to a day out. 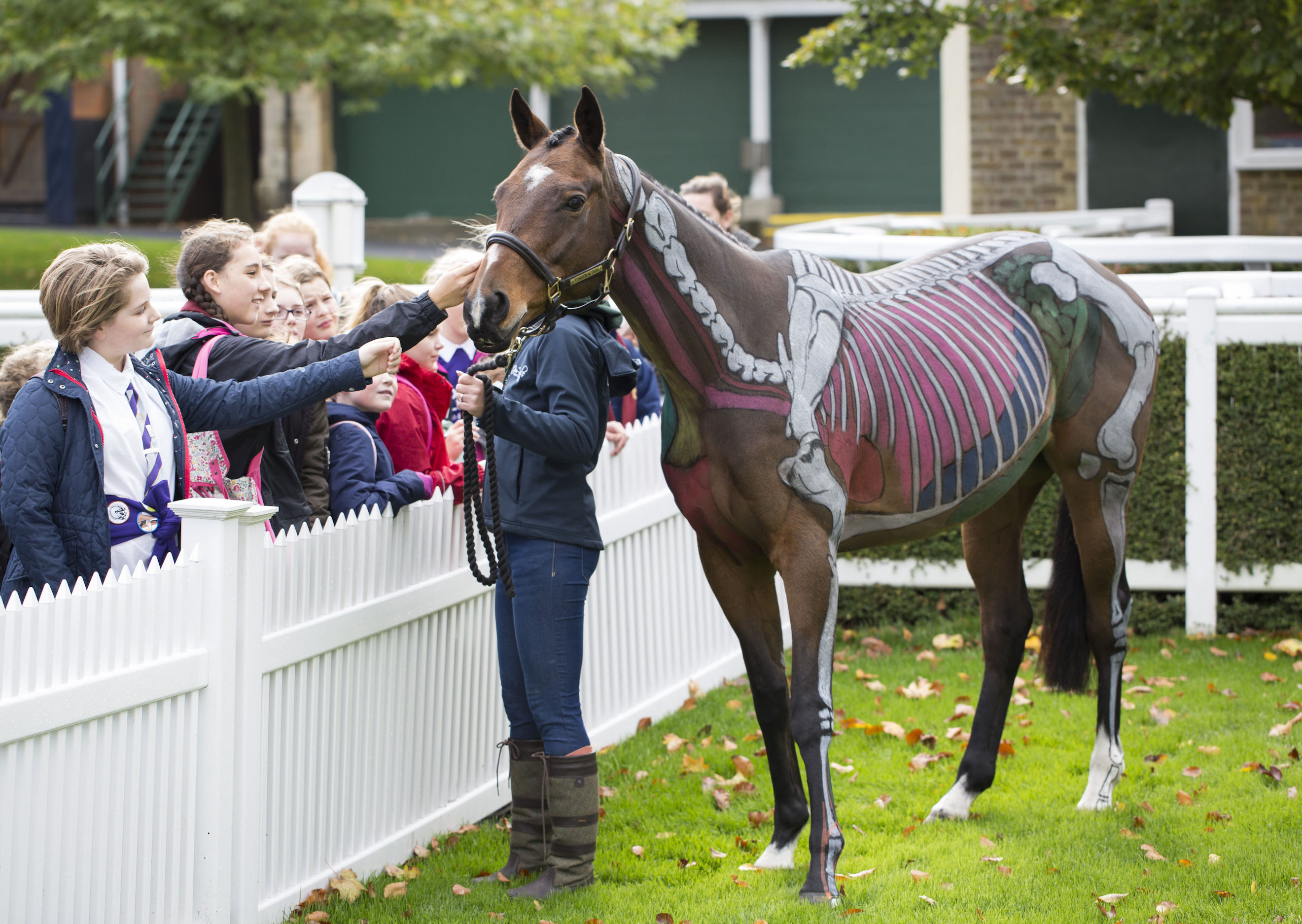 It is not easy to strike the perfect balance and fulfil the expectations of the racing fan without disappointing the social racegoer, and vice versa, but Qipco British Champions Day gets as close to achieving this as any raceday worldwide.

The sponsor has also driven significant funding into inspiring students and children to adopt horseracing as a regular pastime. Qipco Director Sheikh Fahad Al-Thani discovered the sport during his days as a student, and, in a pioneering and commendable effort to encourage today’s students to embrace it, there are 2,000 tickets given away free, and a further 2,000 sold for just £10.

A partnership with the Pony Club, launched in 2013, also aims to involve around 250 children in the day in an area called ‘The Fan Zone’. Children are invited to earn their ‘Horseracing Certificate’, which involves meeting an ex-racehorse and attending a demonstration about the Thoroughbred, taking a bitesize lesson on an equicizer with a jockey coach and going on a behind-the-scenes tour of the racecourse. The extra activity does not cost parents a penny.

Then, of course, there is the Royal seal of approval. The Queen is not obliged to attend, but nevertheless she has been present at every renewal thus far: a fine testament to the quality of the racing. 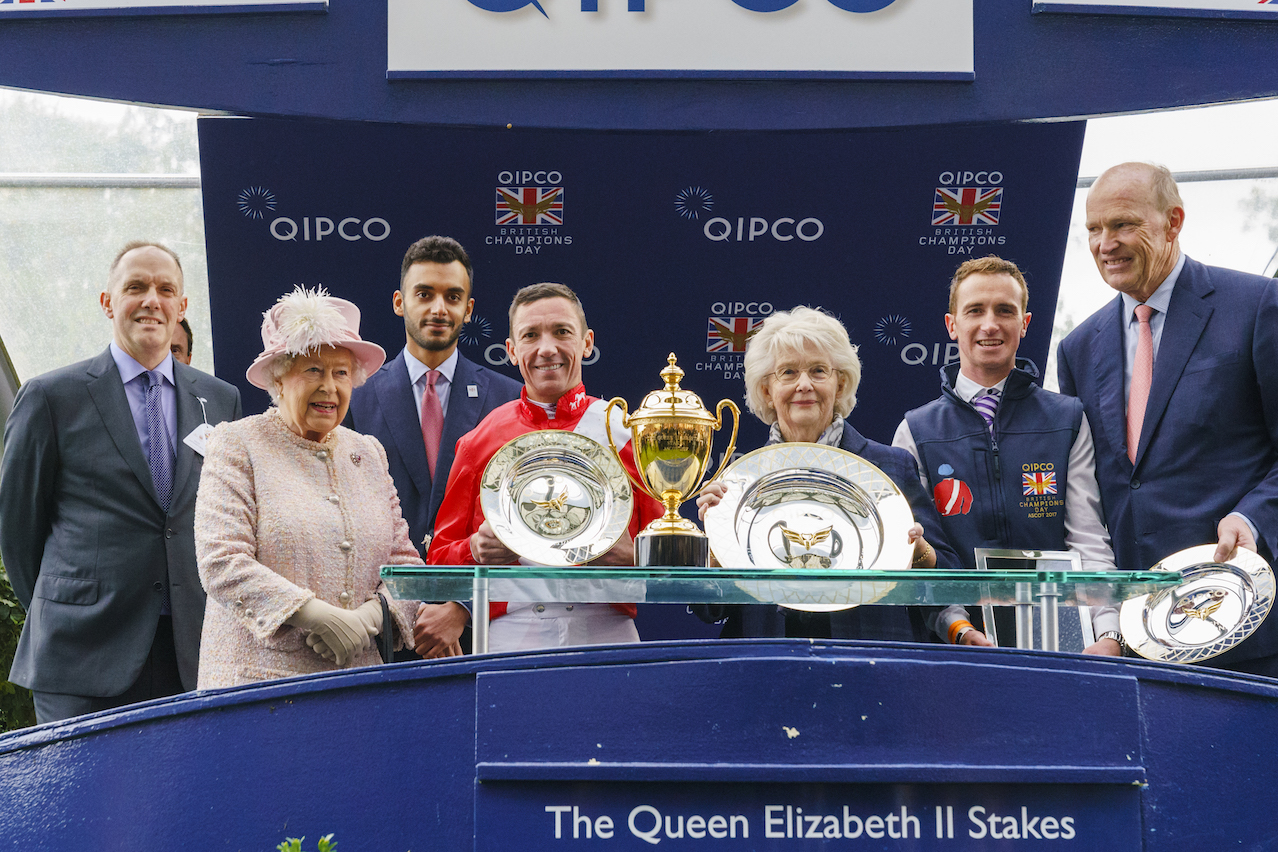 Quite literally, therefore, Qipco British Champions Day is a sporting occasion for everyone.

Clive Cox, trainer of British sprint superstar Harry Angel, summed it up recently by saying: “It’s a meeting you want to be involved at, a very special day, an occasion to savour and always a fitting finale to the season.”

Despite its relative youth, the event has managed to break the shackles that often bind racedays and offer genuine appeal to the British sporting and social public.

Its popularity has helped to propel the Qipco British Champions Series to be the largest horseracing brand on social media in the world, with over 600,000 followers. The day itself generates such interest across the nation that the #ChampionsDay hashtag trended in the top four in the UK last year, with 153,000,000 Twitter timeline deliveries.

If Qipco British Champions Day’s reach and appeal continues to grow at the rate it has since its inception in 2011, we can fully expect it to be spoken about in the same breath as Britain’s historic sporting institutions in the not too distant future. Certainly, it has already become one of the brightest jewels in world racing.

Tickets for QIPCO British Champions Day 2018 can be purchased at www.britishchampionsday.com. Under 18s go free.