Equine speedsters have become synonymous with Dean Ivory’s boutique stable based just a few miles from London’s bustling northern suburbs. Ivory has forged a formidable reputation as a conditioner of popular sprinters such as Lancelot Du Lac, Sirius Prospect and the plucky Tropics, bought for $3,700 and - still winning at the age of ten – now the earner of $725,000 in purses.

But best of all is a 6-year-old set to take on a daunting international challenge in Saturday’s G1 Al Quoz Sprint sponsored by Azizi Developments - Librisa Breeze.

Owner Tony Bloom bought the grey for around $135,000 in 2015 and his purchase has been on an upward form trajectory ever since, culminating in a victory in the G1 British Champions Sprint at Ascot in October. 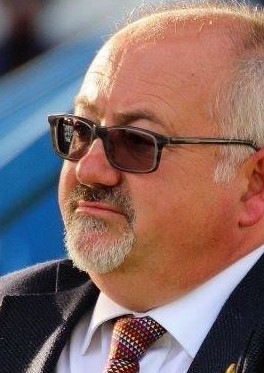 “I still don’t think we’ve seen the best of him,” said Ivory (pictured). “Although he won a Group 1 last year, he has been very unlucky at times. He has to come from the back or mid-division and finish with a late run so he needs luck in running. Every race last year he got stopped two or three times.

“He’s a big, big horse for the future and, barring any accidents, I think we should have a lot of fun with him this year. I actually think he is going to be even better over 1400-1600 metres.”

Librisa Breeze arrived in Meydan early on Saturday morning and had a gentle canter around the training track on Monday morning under groom Emily Crossman. With top performers from the UAE, USA, Australia and Ireland all set to line up in a fabulous renewal of Saturday’s sprint, Ivory believes that his stable star – set to be partnered by regular rider Robert Winston - heads into the race with bright prospects.

“I think he’s got every chance,” said Ivory. “I wouldn’t be sending him all that way just to take part - I’m going with the intention of having a big run. I suppose a worry might be the climate. It’s been very cold with us at home and it’s set to be a warm week in Dubai.

“From a trainer’s point of view, to win a Group 1 at home is fantastic, but if we managed to do it in Dubai it would be just be a dream come true - not just for me, but for my owners and all the staff. We’re a team.”

Ivory took over the license from his father Ken at the family’s Harper Lodge Farm in Radlett, Hertfordshire, in 2002 and he has deliberately limited numbers.

“We end up with 50-60 in training through the year and that works for me,” he said. “Last year I turned a few away, I am a bit selective about horses and owners, but I feel comfortable with the numbers I have. I can pay all the bills, do the job properly and be very hands-on. I think that’s why we are successful.”

But Ivory admits that it is something of a mystery as to why the stable has developed such as a niche with speed horses.

“I’ve no idea what is about sprinters, they just seem to like me,” he said. “We have a long all-weather gallop with twists and turn and I actually train them over a mile and a half. It works and they just seem to enjoy what they are doing when they get to the racecourse.”