For more than 100 years, it was one of Europe’s grandest racecourses, patronised by royalty and high society, as well as one of the greatest horses ever to race anywhere. But the famed Freudenau racetrack in Vienna, and the sport in Austria generally, suffered a painful decline in the second half of the 20th century. Echoes of a glorious past were there on September 16, though, as the Austrian St Leger was run as the centrepiece of the first day’s racing at Freudenau for eight years. David Conolly-Smith was there.

My first visit to the Viennese racecourse on the Freudenau, at the far end of the Prater, a large park in Vienna, was in 1979 and I went there twice more in the 1980s to see the Austrian Derby.

The racecourse, and indeed the whole racing scene in Austria, went into steep decline afterwards. The Freudenau racecourse, also a major training centre in those days, staged fewer and fewer races with less and less added money. The trainers gradually gave up or moved out; Austrian owners had their horses trained in Germany or France. 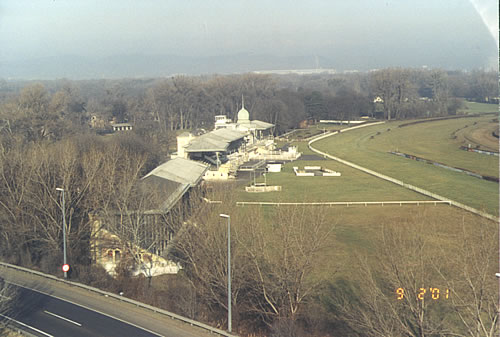 Austrian-born Frank Stronach attempted to revive the Thoroughbred industry in his native country when he built the Magna Racino racecourse in Ebreichsdorf, south of Vienna, which opened in 2004. Hopes were high, but that racecourse too soon fell on hard times and now stages mainly trotting races.

This is a great shame, as racing in Austria has a long and glorious history. Racing at the Prater was first recorded in 1778, and the first organized race meeting in Austria was held in the Viennese suburb of Simmering in 1816. Racing became hugely popular in the German-speaking parts of Europe in the first half of the 19th century and the Freudenau racecourse was officially opened on May 4, 1839, in the presence of the Emperor Franz Josef I; the Austrian Derby was first run in 1868 and soon became an important event. This was a year after the international agreements that resulted in the formation of the ‘dual monarchy’, the Austro-Hungarian Empire.

The Hungarian element played a major role as the Hungarian Imperial Stud at Kisber was one of the most successful in Europe.

The mare Kincsem was foaled here in 1874; she must by any reckoning be regarded as one of the greatest racehorses of all time. She won all her 54 starts and raced in five different countries – Hungary, Austria (including the Derby), Germany (where she won the Grosser Preis von Baden three times), England (Goodwood Cup) and France (Grand Prix de Deauville).

She clearly enjoyed the rather primitive rail travel of those days (the only transport available then); as a 2-year-old she won ten races at ten different racecourses!

Kincsem is the subject of a large-budget feature film made this year in Hungary and is also commemorated at the Budapest racecourse Kincsem Park. Some of her distant descendants are still racing, with a branch well established and also very successful at Gestüt Röttgen in Cologne, including 2017 German Derby and Preis von Europa winner Windstoss. 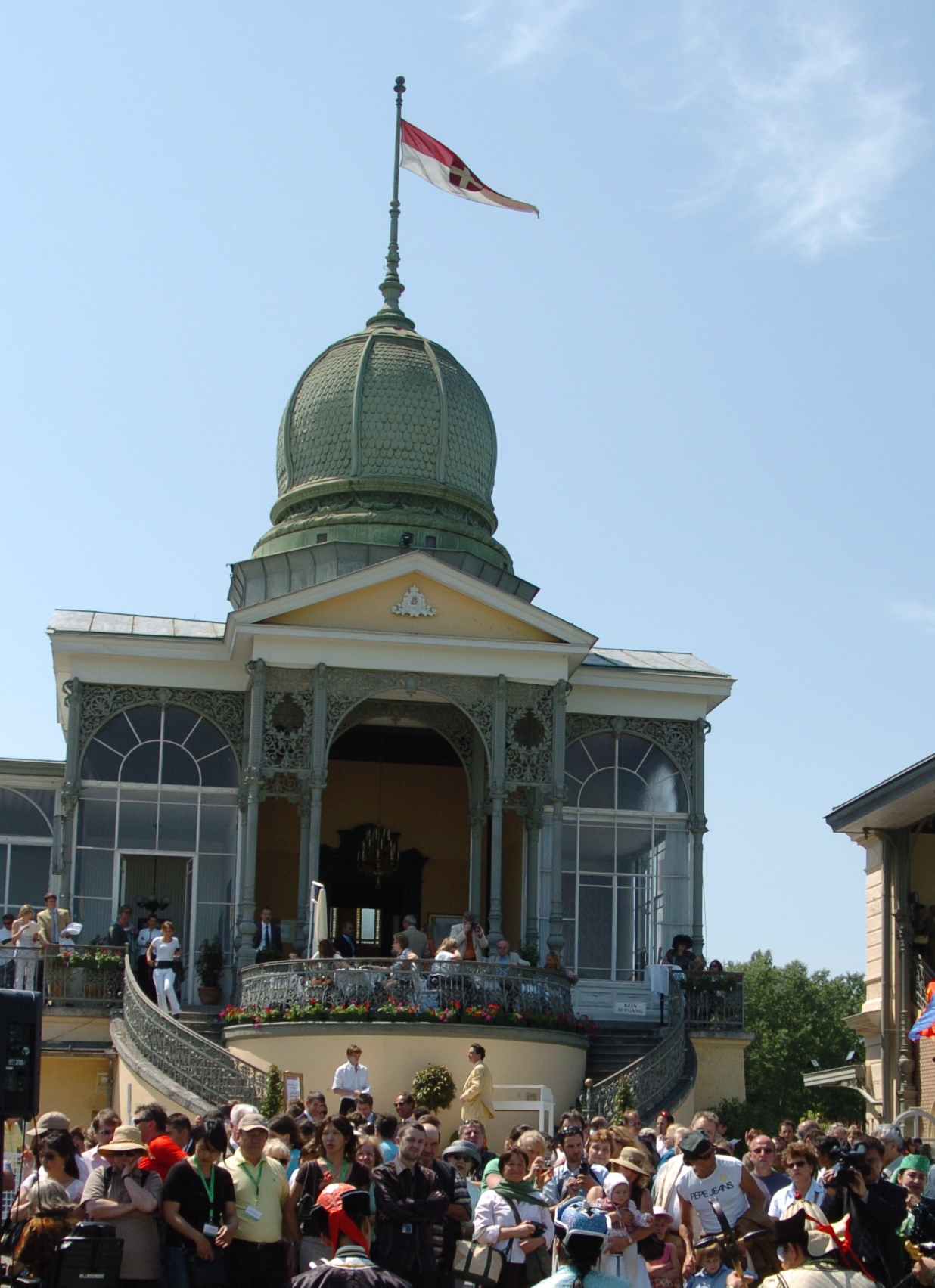 Another product of the stud was actually named Kisber, although his pedigree was English. He was the best horse in Europe in 1876, winning the Epsom Derby very easily by five lengths and then the Grand Prix de Paris. He was owned by the Baltazzi brothers, members of a Greek-Turkish family who had settled in Vienna.

Aristide Baltazzi, one of the brothers, was a regular visitor to the Freudenau and is seen below in top hat and formal dress. He was the uncle of Mary Vetsera, the leading figure in one of the greatest scandals of the 19th century. The young baroness was the mistress of Crown Prince Rudolf; in 1889 the lovers were found dead in the imperial hunting lodge at Mayerling, outside Vienna. This affair, hushed up by the authorities at the time, has given rise to numerous theories but is generally believed to have been a double suicide. It has been the subject of several films and books. 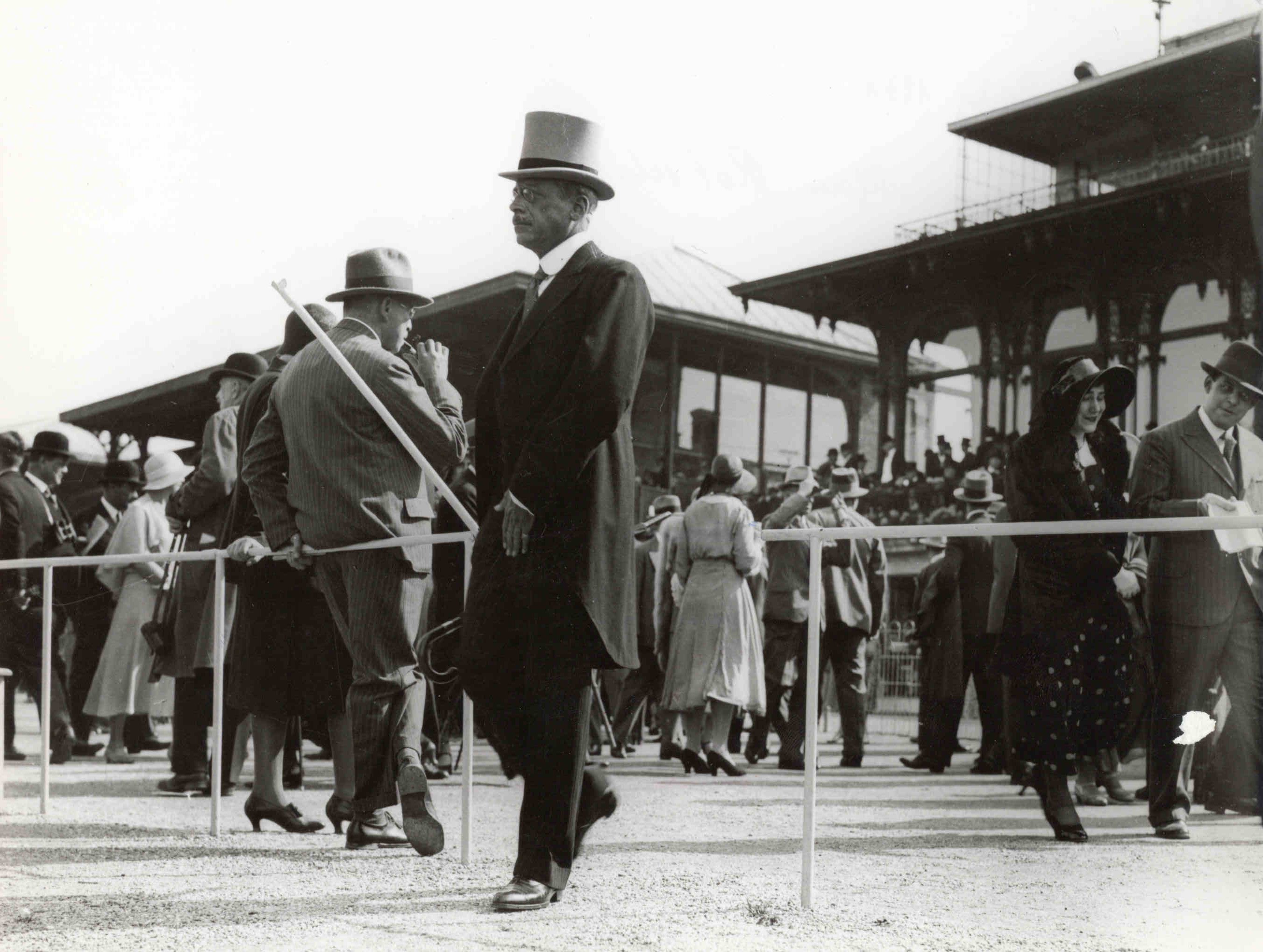 The Austro-Hungarian period was the most successful in the history of racing at the Freudenau. A special tramline and railway station was built to accommodate the huge crowds – up to 40,000 – that attended the Austrian Derby and other major races.

The First World War put an end to the Habsburg empire and the dual monarchy. The decline set in. The Second World War was even worse and ended with huge destruction to Vienna and also to the racecourse. After the war, British troops helped rebuild and restore the racecourse, but the glamour of the 19th century was gone forever.

However the Austrian Derby continued to be a decent and fairly valuable race, attracting runners from Germany, Italy and France.

In 1996 it was won by Commanche Court, trained by Nicolas Clément; he was later sold to Ireland and won the Triumph Hurdle at Cheltenham and the Irish Grand National, and was runner-up to Best Mate in the 2002 Cheltenham Gold Cup, for Ted Walsh.

But standards and prize money gradually slipped; there were fewer and fewer race meetings. The only moment of glory in recent years was in 2016, when the outdoor scenes for the Vienna Philharmonic’s New Year concert were filmed there.

Until last month, the last meeting to be held at the Freudenau was in September 2008. The land is now owned by the Habel family’s IRM (Interrace Rennbahn Management GmbH), who have used it for such events as wedding receptions, company jubilees and exclusive parties. The stands were renovated and, while old-fashioned, are still in good condition, particularly the splendid ‘Kaiserloge’ (Imperial Box). The track itself has been kept in excellent condition. 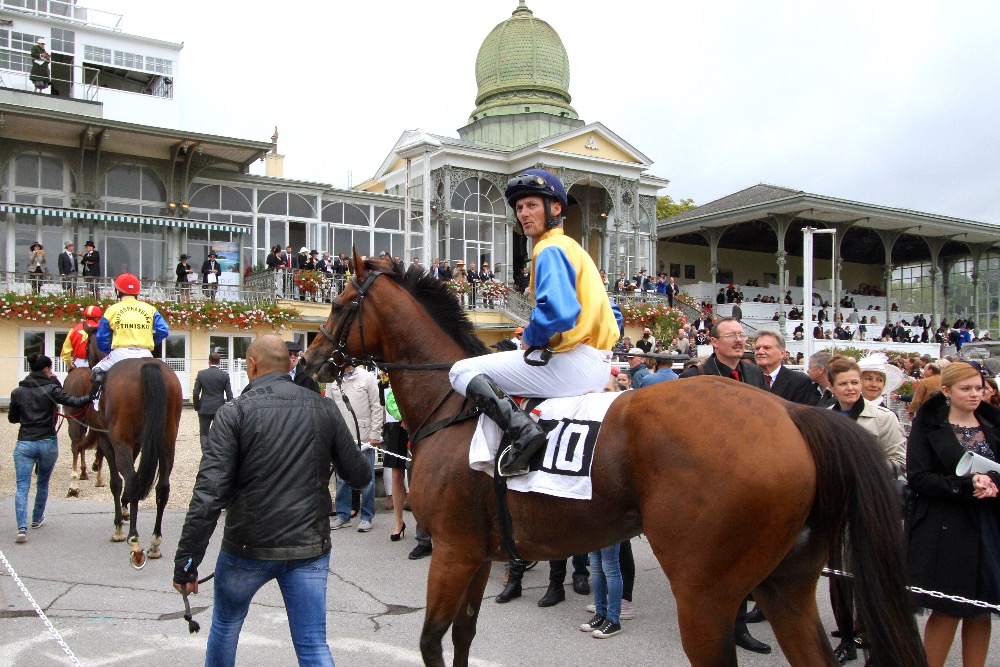 The decision to hold a race meeting this year was made by the IRM in conjunction with gastronomic interests and the newly-formed race club. Unfortunately the weather on September 16 was not ideal; it had rained heavily in the early morning and it was unseasonably cold, so the crowd at 3,000 was lower than expected.

The St Leger itself, which has normally be run at Ebreichsdorf, was a thriller. There were seven runners, three of them trained in Slovakia, two in Germany and one each in the Czech Republic and Austria. The German-trained Iraklion had by far the best form going into the race; he had the highest rating, had run well in much better company and had two German listed races to his credit; he started as 3-5 favourite. Trained in Hanover by Christian Sprengel, he was partnered by Kazakhstan-born jockey Bauyrzhan Murzabayev.

The track is one and three-quarter miles round and the start was right in front of the stands. It was soon clear that nobody wanted to lead, and Iraklion, who had jumped well, found himself in front. This was not the plan, but Murzabayev had to sit and suffer. He led at a sedate pace into the straight, and was then swallowed up.

The Czech runner Icar took a clear lead at the distance and appeared to have the race won, but Iraklion was now roaring back and Murzabayev rode a great finish to get up on the line and win by a nose. 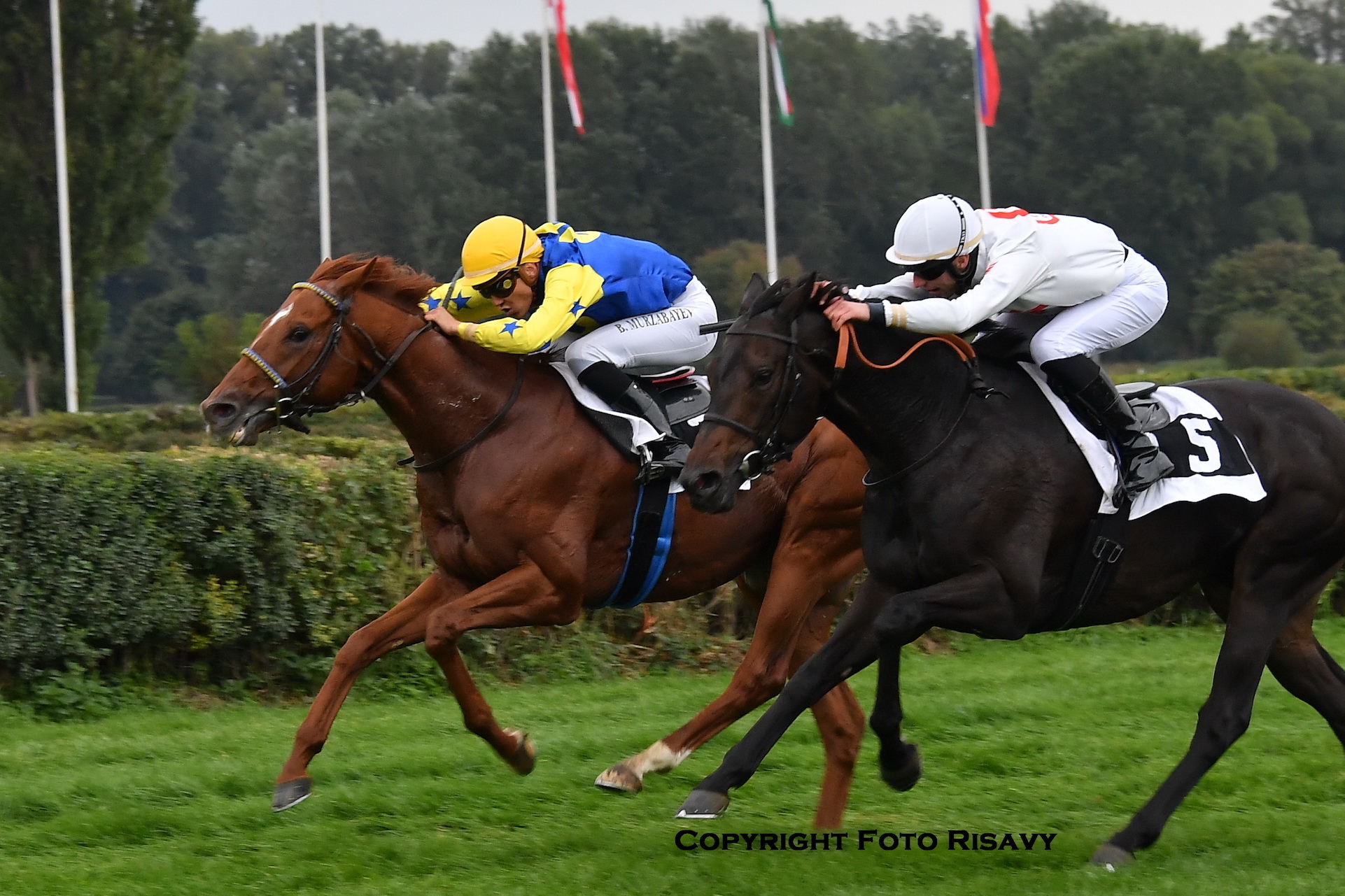 The cosmopolitan nature of the race, and indeed the whole fixture, was one of the many positive factors, and well suited to Vienna, that most international of cities. There were horses in the five races from six different countries, including Bulgaria.

Julia Habel of the IRM is meeting shortly with her partners in the venture to see if they can repeat the race next year.

Quite possibly it was not a financial success, but it was a noble venture; the charming racecourse has been a sleeping beauty for a long time and it must be hoped that there will be racing again here in the future. 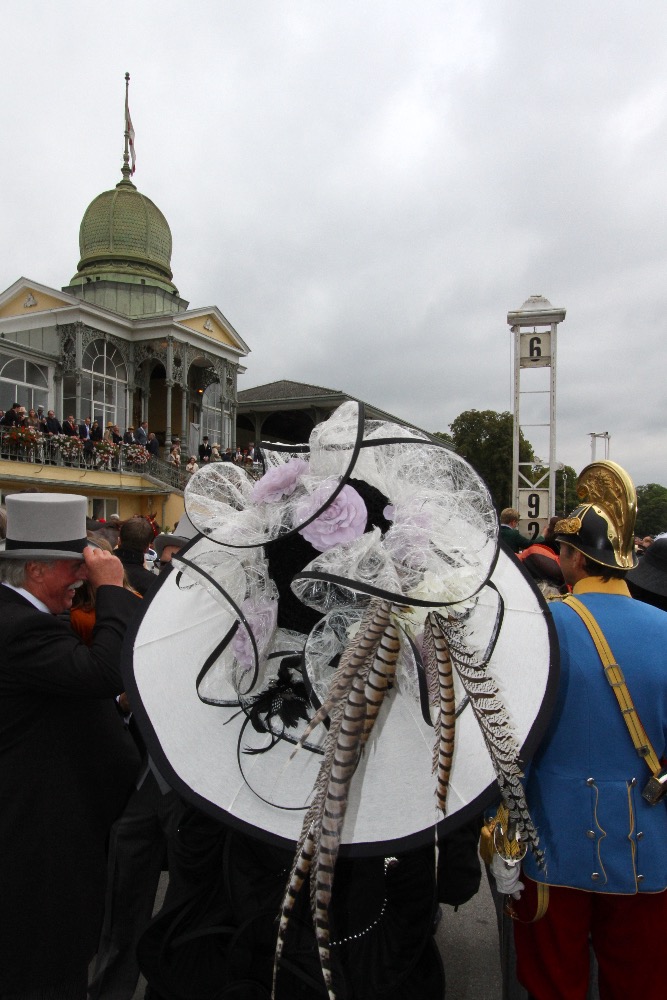