Each summer, the focus of the racing world turns to the two coasts in the United States. The 36-day Del Mar meet brings together the best in the west, and in recent years, because of shipping incentives, runners from locations across the continent. Saratoga Race Course is world renowned for the strength of the racing product, with 17 G1 flat races conducted over the 40-day stand. The final G1 races of each meet -- the Hopeful at Saratoga, and Del Mar Futurity at Del Mar -- are for 2-year-old males and annually bring together the most precocious juveniles of a given generation. However, the most recent runnings of the Hopeful and Del Mar Futurity featured more than three times as many maidens as they did prior graded stakes winners, highlighting a significant shift in the way juveniles are now campaigned.

One significant factor in this changing landscape was Churchill Downs’ decision to amend the criteria by which a horse qualifies for the Kentucky Derby. With graded stakes earnings out and a new emphasis on 3-year-old racing to earn qualifying points, the importance of the Hopeful and Del Mar Futurity was undercut. The historic races could previously provide their respective winners about half of the graded earnings typically needed for a spot in the Kentucky Derby starting gate, but under the new system, they have effectively become as steppingstones to the Breeders’ Cup Juvenile as well as year-end Eclipse Awards.

As a result, it appears that horsemen have logically opted to start their 2 year-olds later in the year. The average number of starts made by participants in the 2014 Hopeful was just 1.57, and four of the 11 prior starts were made by one horse (long shot Dekabrist). If you take Dekabrist out of the equation, the other six horses had started a total of eight times. Three of the seven participants entered the Hopeful as maidens, the first time that had occurred in the 21st century. In the Del Mar Futurity, four of the nine participants entered as maidens, among those was eventual winner American Pharaoh. There were no maidens in the 2013 Futurity field, but there were four in the group of 11 that contested the race in 2012.

Just how much has the current landscape changed? Favoritism for the 2014 Hopeful figured to go to Competitive Edge when he posted an auspicious debut at Saratoga in late July, running off to win by a sizable margin and stamping himself the most precocious of a squadron of Todd Pletcher-trained juveniles. He was joined in the Hopeful by G2 Saratoga Special winner I Spent It, who was bidding to become the first runner to win both of those events since City Zip in 1999. Although he failed, his runner-up finish to Competitive Edge was the best mark a Saratoga Special winner had posted in the Hopeful since Henny Hughes checked in second in the 2005 renewal. 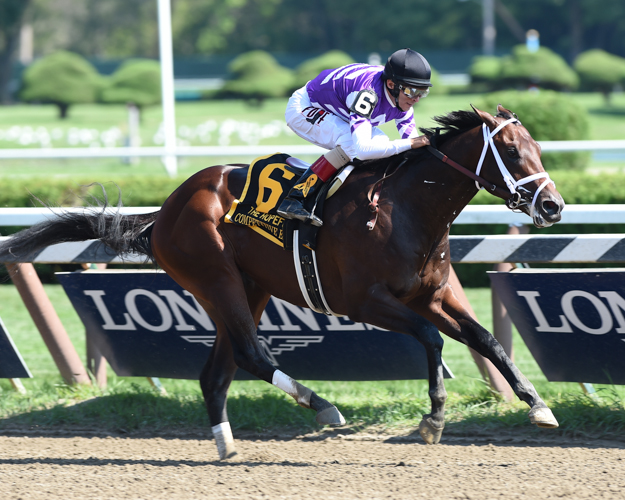 This year’s Del Mar Futurity featured a field of nine, and the participants had made a total of 18 starts before they made their GI debuts on closing day of the meet. There was one prior graded stakes winner among them, as Skyway had won Del Mar’s G2 Best Pal almost one month before. He was also the only dual winner in the field, just as I Spent It was in the Hopeful.

One notable factor in the lack of prior experience of horses in both the Del Mar Futurity and the Hopeful can be attributed to the fact that trainers known for their success with juveniles are now sending out fewer 2-year-old starters overall. The much-ballyhooed issue racing faces with declining foal crops seems to be a potential cause for this decline. Bob Baffert debuted 11 2 year-olds at the recently concluded Del Mar meet. That was down from 20 in 2013 and 18 in 2012. Todd Pletcher debuted 29 juveniles at this year’s Saratoga meet, down from 35 in 2011 and 40 in 2012.

In no way are these trends exclusive to races for colts and geldings. Saratoga’s Spinaway, the first GI race of the year for 2-year-old fillies held east of the Mississippi, featured a field of nine this year. Of those nine, seven had started only once before. The field in total had made 13 prior starts before the Spinaway, and the eventual 1-2 finishers both were second-time starters who had broken their maidens earlier at the Saratoga meet. In the 2013 renewal, the 9 participants had made a combined 14 prior starts, and the eventual 1-2-3-4 finishers were all second-time starters. Just five years ago, the 8 participants in the 2009 Spinaway had made a total of 17 prior starts, and the 1-3-4 finishers were fillies who had been to the post at least twice. A year later in 2010, the field of 8 once again had made 17 prior starts, and the 1-2-4 finishers had started at least twice.

Can it be chalked up to coincidence? Going back to the data compiled in a previous story, which showed that Kentucky Derby participants in the last two years have earned fewer accolades as 2 year-olds, top-level racing for juveniles is clearly being de-emphasized. While places such as Saratoga and Del Mar will always offer the very best 2-year-old racing in the country, the quality of these stakes races will suffer as youngsters start later and later. NYRA experimented with holding only two juvenile stakes races in 2004 and 2005 at Saratoga, and revisiting of that schedule may be worth consideration in future years.