It was the site of the largest military engagement during the Revolutionary War. Today, the lands remain much as they were back then-- rolling open fields, ancient forests, and historic farmhouses with horses grazing in lush pastures.

So it's a bit jarring to spot a zebra -- half the size of a full-sized Thoroughbred -- poking his striped head over a fence at Skirmish Hill Farm. Acquired via a zebra breeder, Zippy arrived as a foal at Roberta (Bobbi) Odell's Chester County, Pennsylvania property in the fall of 1996. At first, his strange scent and his zig-zaggy stripes startled the horses on the farm. Over time they learned to coexist, mostly by ignoring each other, and Zippy became recognized as the farm mascot and something of a local celebrity.

Late in the summer of 2013, the 18-year-old Zippy developed an abscess of his hoof that made it impossible for him to bear weight on his right hind leg. The farm manager alerted the University of Pennsylvania's New Bolton Center in Kennett Square -- one of the most sophisticated large animal and equine hospitals in the world --  and Zippy arrived for treatment in early September. It wasn’t his first visit to New Bolton -- Zippy had spent the first week of his life in the facility’s Neonatal Intensive Care Unit after presenting with Dummy Foal Syndrome, and had returned on several occasions over the years to deal with other medical issues.

This time, Zippy was diagnosed with laminitis, a disease that causes the hard outer part of the hoof to separate from its core. Infection had severely compromised the hoof and it separated from the bone. After radiographing the area, draining the abscess, applying a poultice, and dosing Zippy with medication, Dr. Dean Richardson, chief of large animal surgery, head farrier Patrick Reilly, and Dr. Kim Olsen, staff veterinarian specializing in anesthesia, met to develop the treatment plan that would eventually enable Zippy to grow an entirely new hoof. It was a long and winding seven-month journey that kept Zippy at New Bolton until April 9, 2014.

Richardson was the surgeon who operated on and cared for Barbaro, the ill-fated 2006 Kentucky Derby winner. Headed into Zippy's first surgery, Richardson absolutely thought there was a reasonable chance to regrow the zebra's hoof.

"The big reason for optimism was size and toughness," Richardson said. "It is hard to emphasize enough to the general public how different it is to manage smaller equids compared to big adult Thoroughbreds. Plus Zippy had lost only one foot, which makes it a whole lot easier than if he had lost more. I did not think it was a sure thing, but I also did not consider it particularly quixotic.”

Cousin to the horse

Zebras, closely related to the domesticated horse and sharing a common ancestor, were never truly domesticated or bred for human control. Herbivores, zebras are also notoriously difficult to catch as they are capable of speeds up to 35 miles per hour. They have evolved superb early-warning mechanisms, such as superior peripheral vision. They also rely on excellent hearing, with large ears that can rotate in many directions.

In the wild, zebras have quite an aggressive streak. They are considered so volatile that even a lion may think twice before accosting them. Once they bite, zebras tend not to let go. A kick from a zebra can kill. Reportedly, these creatures are responsible for more injuries to American zookeepers each year than any other animal.

At New Bolton, Zippy’s evolutionary defenses proved a challenge to his laminitis treatment. He required anesthesia to be handled, but soon began to anticipate the approach of the medical team dressed in scrubs - an extra creative approach was required. Anesthesiologist Olsen and the highly trained veterinary staff wound up using a "pole syringe" to inject him from afar. In the end, much of his treatment was about the team's perseverance.

Creative treatment for a favorite patient

Despite being a difficult patient in some respects, Zippy was well known to the staff at New Bolton Center from his previous treatments. He had even become something of a mascot for the open houses that tout New Bolton's work, services, and masterful veterinarians and staff.

"Zippy is one of my favorite patients, ever," remarked Patrick Reilly, chief of farrier services and an integral member of the zebra's medical team. "He was engaging in his own way. He was like a smart pony, but he did things on his own terms. Zippy lived just outside my farrier shop so I saw him all the time.”

Reilly's first order of business was to construct a special shoe for the damaged hoof to make it more comfortable for Zippy to support weight on his injured leg. When he tried to stand for the first time in weeks, the entire hoof capsule tumbled off, in one piece.

“In Zippy’s case, the abscess undermined the whole foot,” Reilly said, explaining that the infection expanded between the hard hoof on the outside and the soft foot on the inside, destroying the sensitive lamina that connects them.

Richardson inserted a transfixation pin across Zippy's cannon bone and surrounded the pin with a cast. If you have a pastern or hoof problem and have the pin(s) through the cannon bone, all of the forces are being borne by the pin and cannon bone, according to Richardson.

“What that does is allow him to bear weight on that leg without putting weight on his foot,” he explained. “The pin transmits his weight. The foot was completely protected from weight-bearing forces. The key to a positive outcome was keeping Zippy healthy and comfortable so that the transfixation pin stayed in long enough to allow the hoof to start to grow."

The hoof started to regenerate, growing down from the upper limit of the hoof capsule, known as the coronary band. After three months, Zippy's hoof wall had grown enough to form a surface for Reilly to attach a prosthetic hoof he created especially for the zebra. The farrier cut a piece of hard plastic the size of Zippy’s foot and placed it in a toaster oven to get it soft. The process was a first for Reilly.

"I molded it right around Zippy’s foot," Reilly said. "It was a very small surface I was working with. I used specific polymers as support materials and glued the cuff of the plastic shoe onto the new hoof."

Beyond running the Penn Vet farrier shop, Reilly is also the director of the Applied Polymer Research Laboratory, the only academic and scientific lab for farrier work in the world. The "glue-on" shoe technology was invented and developed by New Bolton's retired chief of farrier services, Rob Sigafoos. Zippy's medical treatments were an advanced indication of how Reilly deals with quarter crack repairs on a racehorses and sport horses.

"That's the fun part of my job," Reilly said with a grin. "You have a problem you've never dealt with and come up with a solution that works. It's very satisfying." 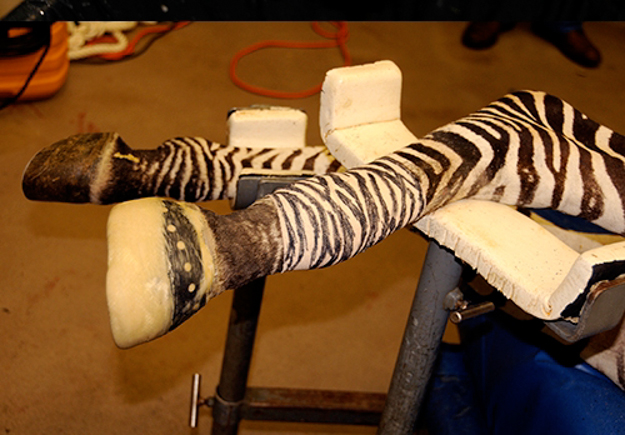 Back in 1983, top-class Standardbred stallion Mystic Park was admitted to New Bolton suffering from Potomac horse fever that progressed to laminitis. He lost two of his hooves, and the other two had to be surgically removed. Without hooves, Mystic Park could not stand so nurses rotated the horse from side to side at regular intervals. Each day, he was lifted by a sling under his belly and moved by a monorail system to an indoor pool where he swam for exercise. Mystic Park's smarts and kind disposition allowed him to remain quiet - lying patiently in his stall - until his hooves grew back. After six months, he departed to take up his stud duties once more.

Zippy possessed similar smarts. He was content to lie down for long periods of time and wasn't compromised by the sores that often occur in horses that must lie in their stall. Richardson noted that pain wasn't severe in Zippy's case as the transfixation cast alleviated much of the discomfort as his foot gradually grew down.

"As you know, there are documented cases of adult horses regrowing entire hooves successfully," Richardson said. "It could definitely be done more often, but it takes enormous commitment in terms of nursing care in larger horses. It would ideally involve long-term sling management in combination with external fixation techniques. It takes a very committed owner and considerable cost."

"Yes, it is absolutely reasonable to believe we could have success in adult Thoroughbreds with this type of approach," Richardson replied. "But it is probably best suited for horses with a single foot involved and no other issues. That was a big plus in Zippy. He had one bad foot.

A medical marvel, Zippy is yet another testimonial to New Bolton's research and "out-of-the-box" thinking in the development of treatment plans in large animal patient care.