The 19 Group races at Royal Ascot 2019 were widely distributed among owners. Neither of European racing’s superpowers really dominated, despite superior numbers.

The table aggregates these results, showing the TRC Global Ranking prior to the event with the competitor’s name. (Owners who were unranked have this information, and the change in points indicated by the column on the extreme right, omitted: 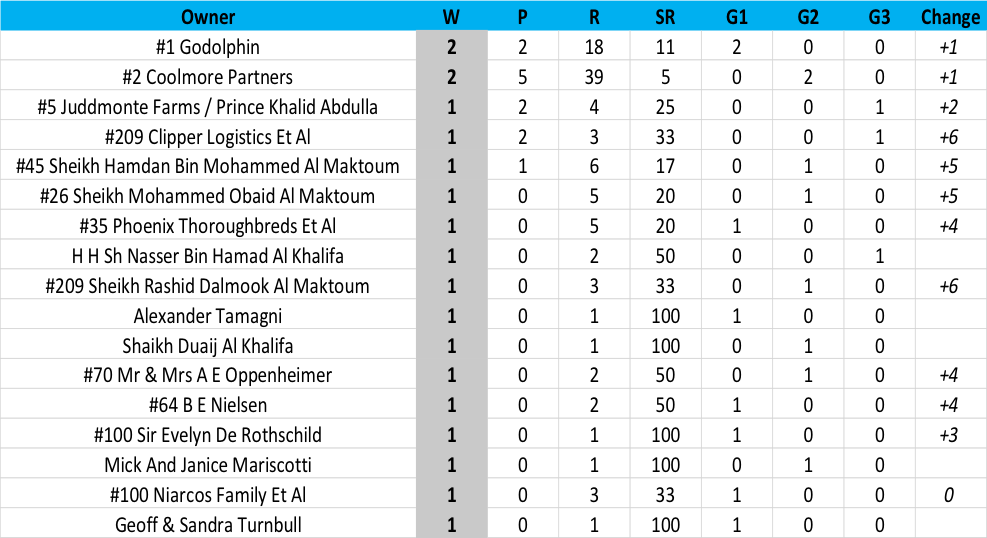 Godolphin’s two wins came from the same horse – the remarkable Blue Point, who made history by annexing both G1 sprints. Coolmore Partners collected the G2 wins of Japan in the King Edward VII Stakes and Arizona in the Coventry Stakes for 2-year-olds. Five other placed horses would normally have garnered more points for them, but they did field a staggering 39 runners in Group races across the five days, and TRC Global Rankings measured both volume and average.

For slightly unusual reasons, this award goes to JUDDMONTE FARMS / PRINCE KHALID ABDULLA. While Sangarius netted their sole Group win of the meeting (they also won the Britannia Handicap via Biometric), it is the performance of their stallions Kingman and Bated Breath that seals the success.

For his part, Sangarius impressed greatly when surging clear of the field in the G3 Hampton Court Stakes. He looks to have made good progress physically, and should continue to thrive over a mile and a quarter plus. His sire, Kingman, rises 27 places to #55 after gaining 9pts due mainly to this win. As a result, he is the leading second-season sire in our rankings with seven wins from 37 runs coming from 21 individuals.

Like Sangarius, a raft of these individuals is likely to contribute further to his score. Notable among these is G1 St James' Palace Stakes runner-up King Of Comedy who surely would have beaten the winner Circus Maximus in a more strongly-run race.

Bated Breath was the stallion sensation of Royal Ascot, along with Blue Point’s sire Shamardal and, of course, Sea The Stars, who had three winners.

There is a chance his runners are particularly suited to the straight track at Ascot, where both Space Traveller in the Jersey Stakes and Daahyeh in the Albany Stakes picked up G3 contests. (Bated Breath also added a non-Group winner on the straight track.) For good measure, another G3 win came across the Pond at Santa Anita.