At the recent Asian Racing Conference held in Hong Kong, there was an excellent panel titled “Racing’s Lifeblood-The Future Landscape for Wagering.” The information presented was sobering, and I was inspired to share some thoughts and analysis based on the facts provided.

This first chart (courtesy of Aushorse Magazine, 2014) shows total wagering, prize money, and races run for the six largest racing jurisdictions around the world based on 2012 data compiled by the International Federation of Horseracing Authorities (IFHA). As one might expect, Japan handled by far the largest amount of money – more than twice the amount wagered in Britain and France, which were second and third in the total wagering. In total prize money paid, Japan again occupied the top spot, offering approximately 10 percent more prize money than the United States. However, the U.S. ran almost three times as many races as Japan.

It is more instructive to look deeper at the average wagering and prize money on a per race basis. To calculate this, I divided each jurisdiction’s total amount of wagering per race and its prize money per race by the total number of races in that jurisdiction. To avoid inconsistency that might result from fluctuating exchange rates, I have retained the currency in euros throughout this article.

In wagering per race, Hong Kong dwarfs the field and generates more than six times the amount of wagering per race than France, which occupies the runner-up spot. As an example, on a good raceday in Hong Kong (an average day with an average program), the Hong Kong Jockey Club will handle more than The New York Racing Association, Inc. (NYRA) is likely to handle from all sources on the upcoming Belmont Stakes Day with California Chrome shooting for a Triple Crown. An all-time NYRA record could very well be set on that day, yet it will be the equivalent of a good racing day in Hong Kong.

Looking at Great Britain – which has the third-highest handle per race – they lag far behind the field when it comes to prize money, offering the lowest amount per race of any of the jurisdictions examined. These statistics clearly reflect the fact that prize money in Great Britain does not get its fair proportion of contribution from the wagering. The U.S. is totally outdistanced in wagering per race, with only 187,190 euros wagered per race. This statistic plainly shows that the 44,929 races run in the U.S. is far too many to generate consistent wagering returns.

Next, I looked at average prize money yield, which is a measure of how much wagering is generated based on each euro of prize money paid. I calculated these numbers by dividing the amount wagered per race by prize money per race. 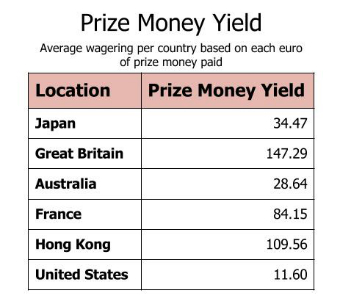 In this comparison, Great Britain stands way above the pack, which probably is not a healthy sign for its racing industry, as it illustrates the bookmakers’ lack of an adequate contribution to prize money.

While Hong Kong represents the greatest amount of average prize money paid per race, they still have a very strong prize money yield due to the strong wagering activity – a truly remarkable fact.

In the U.S., the low prize-money yield suggests future problems for racing. While there may be some inflation in purses in this country due to contributions from alternative gaming, a prize money yield of only 11.6 per each euro wagered will not sustain prize money at anywhere near the current level.

There are many other ways to interpret the numbers provided above, but no matter how you consider the data, the results are thought provoking.