For lovers of racing, little compares to an afternoon (or evening) at the track. The sport is best experienced in the flesh, and the world’s race courses offer diverse ways to enjoy this pursuit. While we can’t literally transport you to the races, we’ll do our best to bring these tracks to you in a monthly series of profiles that begins today with the first installment of a delightful and expansive report on Keeneland Race Course by Glenye Cain Oakford.

For lovers of racing, little compares to an afternoon (or evening) at the track. The sport is best experienced in the flesh, and the world’s race courses offer diverse ways to enjoy this pursuit. While we can’t literally transport you to the races, we’ll do our best to bring these tracks to you in a monthly series of profiles that begins today with the first installment of a delightful and expansive report on Keeneland Race Course by Glenye Cain Oakford.

Read about the Keeneland facilities from Grandstand to finish line.

Keeneland lives by its motto: “Racing as it was meant to be.” That was the sentiment of its founders, the group of horsemen, sportsmen, and business leaders who opened a new racetrack in the heart of the Bluegrass Region in 1936. They wanted Keeneland to reflect their view of racing as a sport, an honorable tradition that was more than just a betting game.

“We want a place where those who love horses can come and picnic with us and thrill to the sport of the Bluegrass,” as founding President Hal Price Headley once put it. “We are not running a race plant to hear the click of the mutuel machines. We want them to come out here to enjoy God’s sunshine, fresh air, and watch horses race.”

In the 78 years since, that mission has largely succeeded, making Keeneland an unusual and highly enjoyable place to go racing, whether you’re running a horse or attending as a casual spectator. Keeneland lives up to its original aim with a family-friendly atmosphere and a patron demography that ranges from racehorse-buying billionaires to the gaggles of young college students that many racetracks are struggling to attract. But it also has enjoyed the sound of mutuel machines clicking, a function of both its high-quality racing and a range of attributes that casual and serious bettors appreciate. Examining such factors as takeout rates, field size, and pool size, the Horseplayers Association of North America has ranked Keeneland first among North America’s racetracks for the last five years. 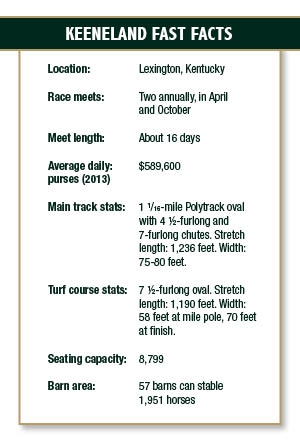 One of five racetracks in Kentucky, Keeneland offers a unique blend of classy boutique race meets and Tiffany & Co.-style Thoroughbred auctions in a pleasing pastoral setting. It is more rural in feel than Churchill Downs in Louisville and Turfway Park near Cincinnati, each about 90-minutes away from Lexington. It offers more sustained high-quality racing than the smaller, but charming, Ellis Park, located almost four hours to the west. And it has a longer meet with more racing variety than the unique all-turf, five-day stand at Kentucky Downs, about three hours southwest of Lexington. It also has a uniquely appealing asset: an open backstretch, through which racing fans can tour and talk to horsemen without the bother of arranging passes and badges.

People have poked fun at the Keeneland Association for being too conservative. For example, it didn’t hire a track announcer until 1997, a move that prompted one longtime racegoer to proclaim that founding president Hal Price Headley was rolling in his grave. But Keeneland’s history also reveals an independent streak that has led it to embrace some changes and to innovate. Keeneland reflects a strong link to the breeding industry as well. For all of these reasons, it’s a worthy starting point for our tour of the world’s notable racecourses.

Keeneland’s basic business model is unusual, growing out of its founders’ conviction that the track should be a showcase to benefit the Thoroughbred sport and breed, as well as the local community. The Keeneland Association is a non-dividend-paying, privately-held corporation that runs two brief race meets and four Thoroughbred auctions a year, in addition to a healthy menu of racing simulcasts all year around; its board members receive no financial compensation.

After paying its taxes as a corporation, the association puts its earnings to purses, facility improvements and development, Thoroughbred industry initiatives, and community programs and charities. And those earnings are substantial: In 2013, the 16-day April meet’s all-sources handle was $161,990,604, and the 17-day October meet saw total all-sources handle hit $142,999,252, both records for the respective meets. Total attendance for the two meets also set records and averaged 17,401 in the spring and 15,674 in the fall.

The Keeneland Association, founded in 1935 with Headley as president, opened its gates on Oct. 15, 1936. The track opened at a challenging time for Kentucky racing. These were the middle years of the Great Depression, and the previous Lexington racecourse, a century-old track operated downtown by the Kentucky Association, had failed in 1933. From the beginning, Keeneland’s founders pressed their case that the venture was sporting rather than purely financial. Among those early advocates was Major Louie Beard, a Keeneland founder and farm manager for John Hay “Jock” Whitney, the U.S. Ambassador to the United Kingdom whose great horses included two-time Cheltenham Gold Cup victor Easter Hero and American Horse of the Year Tom Fool. In 1935, Beard addressed the local Optimist Club, noting that Keeneland’s planned race meetings “are to be run for sport and sport only, and officered by men who will give their services gratuitously.”

The Keeneland Association had turned to local sportsman J. O. “Jack” Keene for land. Keene sold them 147 1/2 acres of his Fayette County property, which already included a racetrack and a stone barn, for $130,000 and $10,000 in association shares. The land, of course, provided the track and its governing association with its name, as well. Keeneland transformed the stone barn into a grandstand and installed an electric totalisator machine that Daily Racing Form called “the first such apparatus installed in this section of the country.” 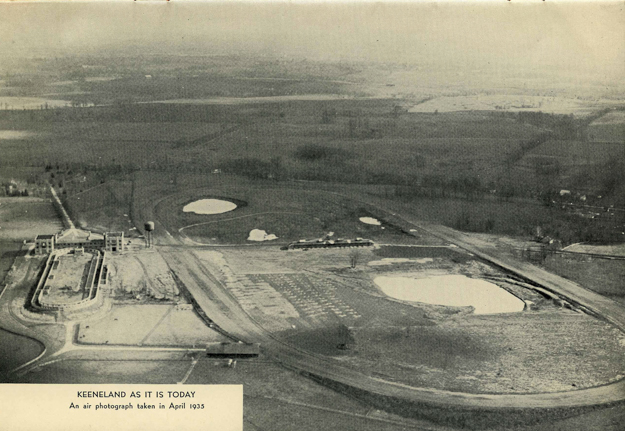 In 1939, founding member Arnold Hanger presented Keeneland with 2,300 volumes of books collected by Robert Turnbull. From that seed, Keeneland’s reference library has grown to more than 15,000 volumes of books and periodicals, 250,000 photographic negatives, the complete Daily Racing Form archive, and much more.

Over the years, Keeneland has developed the reputation as the “gracious living” spot in Thoroughbred racing, a place where pure sport and big business meet and shake hands over blue-blooded yearlings, and a place where those who love Thoroughbreds and sporting history can find plenty to satisfy them.

*Keeneland announced on April 2, 2014 that the Polytrack racing surface would be replaced with dirt in time for the 2014 fall meet.

Read about the Keeneland facilities from Grandstand to finish line.