Amy Owens is a communications associate at Keeneland and a veteran horse racing writer, having served in editorial positions at The Blood-Horse, the American Quarter Horse Association, and Thoroughbred Times.

A donation 75 years ago began the world-famous Keeneland Library.

“Collecting the literature of the Turf is a rare and expensive hobby, carried on mostly by a few individuals with a peculiar enthusiasm and with an income sizeable enough to stand the punishment which it entails. Because of the great expense and the highly specialized nature of the subject, no library of racing is open to the public anywhere in America. But sometime during the coming spring this situation will be changed when the Keeneland race track at Lexington opens for inspection and use one of America’s finest collections of books on Thoroughbred racing and breeding.” – The Blood-Horse of Jan. 6, 1940. 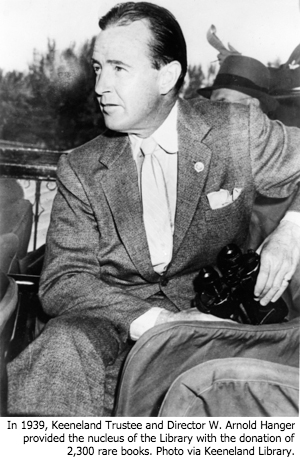 Three months before the above was written, W. Arnold Hanger, a Thoroughbred breeder, businessman, philanthropist, and book collector, as well as a Keeneland Trustee and Director, acquired the approximately 2,300-volume turf collection of New York attorney Robert James Turnbull and donated it to Keeneland. Hanger specified “that the volumes be accessible to anyone who wished to use them for reference and research,” according to The Blood-Horse of Dec. 14, 1940.

And so began the Keeneland Library.

J.A. Estes, editor of The Blood-Horse, was put in charge of operating the Library and adding to the original collection. Keeneland architect Robert W. McMeekin oversaw the transformation of a room on the second floor of the Clubhouse to accommodate the Library. Ernest R. Gee, the sporting art book dealer with whom Hanger had worked to obtain the Turnbull collection, arrived in the fall of 1940 to unpack and shelve the books.

The Keeneland Library opened to the public just before the 1940 Fall Meet and since 2002, has occupied a specially designed 10,000 square-foot building that features the limestone façade and tasteful understated décor of the race track, sales pavilion, and other buildings on Keeneland’s 1,034 acres. Supported by Keeneland and by donations and gifts-in-kind, the Library welcomes more than 3,000 visitors each year, including racing fans, journalists, writers, college professors, historians, and others seeking information for their personal use or for articles, books, and other projects, while the staff answers countless phone calls, emails, and letters. Visitors may use public computers, wireless Internet, a conference room, and work and study spaces. 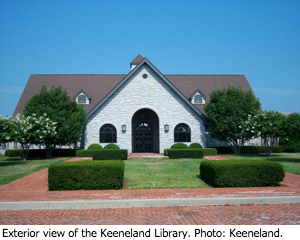 “To my knowledge, with the exception of the National Sporting Library in Middleburg, Virginia, we are the only Library in this country devoted to the Thoroughbred horse that is open to the public and has professional librarians on a daily basis,” said Head Librarian Cathy Schenck, who has worked at the Library since 1978.

Perhaps the most well-known book containing information researched at the Library is Laura Hillenbrand’s 2002 best-seller, Seabiscuit: An American Legend, which was made into an Academy Award-nominated movie.

Growth of the collection

Once the Keeneland Library was established, prominent members of the Thoroughbred industry began donating books and items. In 1941, Virginia Hays from of the Lexington Public Library, whose father, T.P. Hayes, owned and trained 1913 Kentucky Derby winner Donerail, began managing and cataloging the collection on a seasonal basis through 1944. In 1954, Amelia King Buckley became the first full-time librarian. 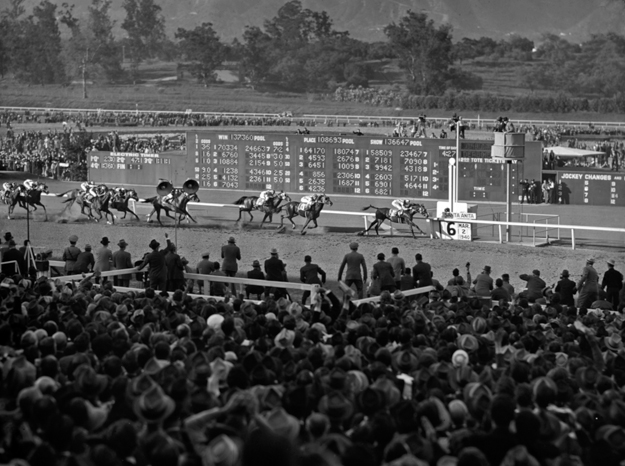 More about the collection is available via an online catalog. Holdings include:

Researchers occasionally request material related to the international Thoroughbred industry, and the Library has such works as: 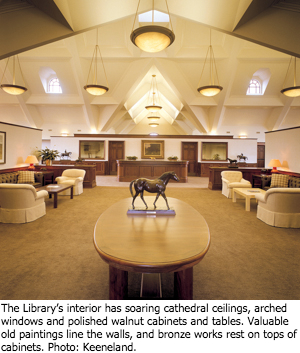 The Keeneland Library continues to carry out Keeneland’s mission to serve and better the industry and the Central Kentucky community. The Library lends artifacts to area museums and works to expand the collection and its availability to the public. Currently the famed “Lexington Bowl,” formerly the official trophy of the Toyota Blue Grass Stakes (1937-1952), is on display at the International Museum of the Horse at the Kentucky Horse Park not far from Keeneland.

In March 2014, the Library held its first sale of approximately 7,000 duplicate books, journals, and magazines that drew buyers from five states. An Ohio bookseller took home 103 boxes of material and through his online store found an interested buyer for several titles living in Germany.

In 2013, the Library began a Lecture Series, a forum for authors of recent works about Thoroughbred racing to share their projects and sign books for attendees.

On Sept. 23, English author Paul Roberts will discuss Racecourse Architecture, an exhaustive look at the history of the architecture at some of the world’s greatest courses, including Keeneland, that he wrote with Isabelle Taylor. The next night Roberts will talk about his book The Spa: The Legendary Saratoga Race Course. The work is an architectural history of the race track, the oldest sporting venue in the U.S. 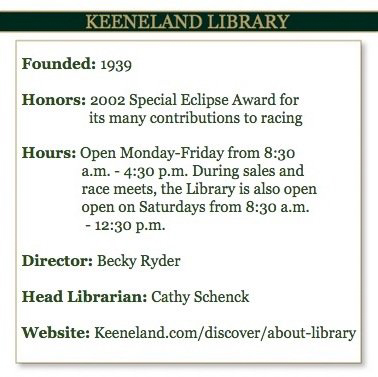