The running of the G1 Memsie Stakes at Caulfield last weekend jump-started Australia’s spring-racing season. With the Melbourne Cup as the star of the show in November, Trent Masenhelder outlines the often complicated and competitive process of qualifying for the world’s richest handicap.

With spring converging on the Southern Hemisphere, racing folk Down Under are gearing themselves up for the internationally renowned spring racing carnival. Australia will play host to a plethora of top-quality G1 racing, with the feature being the time-honoured Melbourne Cup, the richest and most prestigious two-mile handicap in the world. Held every year at Flemington Racecourse on the first Tuesday in November, the Cup draws more than 100,000 people to the track, and a television audience of 700 million across 163 territories.

First run in 1861, the race carries a total prize purse of AUD$6.2 million (USD$5.8 million), and has become a target for many international owners and trainers, largely thanks to the triumph of the Irish-trained Vintage Crop who, under the guidance of master handler Dermot Weld in 1993, became the first foreign raider to win the “the race that stops a nation.”

Since then, the race has attracted an enormous amount of international interest, with global heavyweight Godolphin regularly sending members of its team, while Weld again tasted victory in 2002 with Media Puzzle. The Japanese got their hands on the Cup for the first time in 2006 when Delta Blues outstayed stable mate Pop Rock, and the French celebrated the 150th edition of the race in great style four years later. Americain, prepared by Alain de Royer-Dupré and ridden by compatriot Gérald Mossé, took the honours that year, and “Les Bleus” made it back-to-back successes when the Mikel Delzangles-trained Dunaden won in 2011.

But how does a horse qualify for the world’s richest and most illustrious handicap event?

Horses aged 3 years and older can be nominated for the Melbourne Cup, which is also one of the richest turf races worldwide. The race is run under handicap conditions, with the minimum weight being 49 kilograms (108 pounds) for 3-year-olds, while the top-weight must carry no less than 58 kilograms (128 pounds).

Each year, approximately 250 horses are nominated for the Melbourne Cup, which has a capacity field size of 24 runners. Should there be more than 24 final acceptors – which, these days, there always is – a ballot system is implemented to determine the make-up of the final field. Last year, 11 horses were balloted from the race – in other words, 11 horses didn’t make the final field.

Exempt from the ballot, the winners of the following races in 2014 will be given automatic entry into this year’s field: G1 Lexus Stakes, G1 Mackinnon Stakes, G1 Cox Plate, and G1 Caulfield Cup. In 2013, the Victoria Racing Club (VRC) announced that the G1 Irish St Leger, G1 Tenno Sho (Japan), and G1 Victoria Derby would no longer offer a Melbourne Cup ballot exemption, which they had in previous years.

So how does the ballot work?

Melbourne Cup entries were lodged by Tuesday Sept. 2, while any horse not previously entered could be nominated a week later at a fee of AUD$5,500 (USD$5,123). Following that, horses are ranked by how much weight they are handicapped to carry when racing in the Melbourne Cup compared to the weight-for-age scale. The current scale in Australia is 59.5 kilograms (131 pounds) for horses aged 5 and older, 58 kilograms (128 pounds) for 4-year-olds, and 50 kilograms (110 pounds) for 3-year-olds. Mares, 4 and older, are afforded a 2 kilogram (4.4 pound) allowance.

Following the announcement of nominations on Sept. 2, the first order of entry, which is effectively a rankings system, is released in mid-September. Those outside the top 24 will need to rely on their rivals’ attrition to get inside the field, or win their way into the starting line-up with victory in one of the four ballot-exempt races, as listed above. Alternatively, a feature-race win can hand a horse a penalty, and will often help it leapfrog lesser-handicapped horses up the list.

Due to the enormous amount of prize money on offer, coupled with it being “the race everyone wants to win,” a Melbourne Cup berth is extremely coveted, and many connections find themselves scrambling up until the last few hours to win a place in the field. Both the G1 Lexus Stakes and G1 Mackinnon Stakes are run on the Saturday before the Melbourne Cup, with the winner of those contests gaining an automatic start on Tuesday. As a result, these two races, which occur on the first day of the four-day carnival, are hotly contested.

With so many international entrants nowadays, and those horses almost almost assured a spot in the final field due to their larger handicaps, locals, who once upon a time never had to contend with overseas raiders, are finding it increasingly challenging to gain a start in the Cup. This is a moot point among Australians every year.

“The minimum weight required to get into the race has risen dramatically,” Carpenter said. “Ten years ago, a number of horses on the limit weight would have been able to get their way into the field. But, in recent years, the cut-off mark for an older male has been about 3 kilograms (6.6 pounds) higher than the minimum, so basically, you almost have to be a group-winning horse to win your way into the field now. There’s been an increase in the number of internationally trained horses running in the race on a consistent basis. So it’s incredibly more competitive to actually get a place in the field.”

Aside from prize money, the Melbourne Cup is a matter of prestige and opportunity for trainers. In 2000, the Sir Tristram-sired Brew took out the race, and his New Zealand trainer Michael Moroney recalled, “Winning the Melbourne Cup is right up there in terms of best moments in my life. It’s the race all trainers aspire to win, and after Brew won, it opened up new doors for me." Alongside trainers, Australian owners aspire to this race more than any other on the racing calendar. There is romance, history, and glory attached to the Melbourne Cup.

This year’s event will be run on Tuesday, Nov. 4, and the first list of nominations showed that the race will be as competitive as ever. With a 10 percent increase in entries since last year, there were 148 horses nominated this year compared to 135 in 2013. There are 31 internationals on the list, up three on 2013, spearheaded by Queen Elizabeth II’s Ascot Gold Cup winner Estimate, along with Red Cadeaux, Dandino, Pale Mimosa from the Dermot Weld yard, and entrants from Japan and Germany. Race weights will be released on Sept. 16, with first and second rounds of declarations in October, and final declarations on Nov. 1. 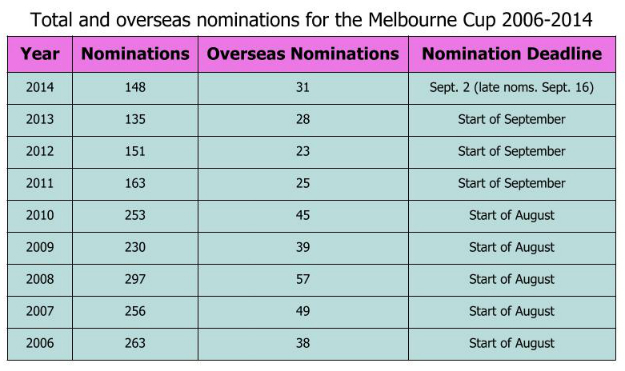