It’s always a difficult job to assess the relative merits of the international racehorse population, and, as is normal, many will argue that the 2019 Longines World’s Best Racehorse Rankings, which were unveiled in London today, have got some things wrong. Much of what they tell us, however, is pretty close to the truth, and significantly that includes the inescapable judgement the figures deliver on the year’s Classic crops around the globe: they were all well below par.

For the first time since 2012, in fact, there was no 3-year-old rated in the world top ten. Indeed, only once in the last decade (in 2012) has there not been one in the top four. In 2019, however, the highest-placed was the Prix du Jockey Club winner Sottsass, whose mark of 123 puts him no higher than joint 16th.

There is surely no comfort in the knowledge that that rating is just five pounds behind the trio of joint world #1s - the European turf runners Crystal Ocean, Enable and Waldgeist. Whether they are the right table-toppers is up for debate - particularly from supporters of the Japanese mare Lys Gracieux, winner of three of the nine highest-ranked races of 2019 in the Longines list of the 100 best races, which was also unveiled today (based on the average rating of the first four finishers). That, though, is not a subject for discussion here.

Sottsass, of course, may well prove to be undervalued (which could be one of the reasons Coolmore have just bought a half-share in him from Peter Brant’s White Birch Farm). That 123 was awarded for his 3½-length third in the ParisLongchamp mud behind Waldgeist and Enable in the Arc (which is once again hailed as the Longines World’s Best Race). Like Coolmore’s Japan, who was half a length behind in fourth, Sottsass did not enjoy the conditions that day. He could develop into some force in 2020.

Japan, another whose talents may go on to earn him a more substantial figure by this time next year, is 2019’s joint second best 3-year-old, along with his stablemate, the July Cup winner Ten Sovereigns, and America’s highest-rated, the Kentucky Derby first-past-the-post Maximum Security, whose status may rise should he triumph in the world’s richest race, the $20 million Saudi Cup, at the end of next month.

It was an ordinary year for the Japanese Classic crop too. A mark of just 120 is enough to put Saturnalia top of the heap. Australia’s best, the Everest winner Yes Yes Yes, is on the same number, but high-level middle-distance 3-year-olds down under are once again nowhere to be found. 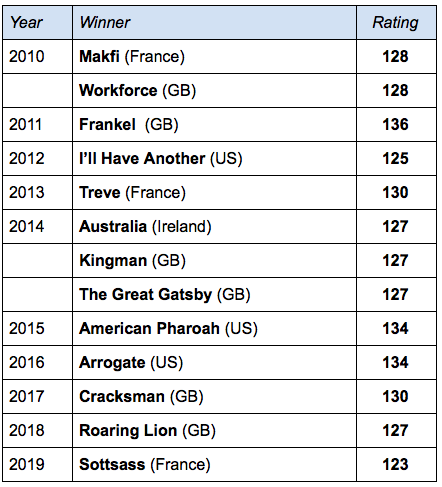 Hopefully, the strength of 2019’s sophomore generation, or rather the lack of it, will turn out to be a mere stutter in the historical narrative of the Thoroughbred. But the declining rank of what have always been universally espoused as the sport’s two most important breed-shaping races is starkly laid bare by the Longines numbers.

In the chart of the top 100 races, the Epsom Derby languishes in 36th place. While that is pretty disappointing, it’s a full ten places higher than the Kentucky Derby, which comes in at #46, a position it shares with, among others, two other previously more prominent contests whose 2019 renewals got a pretty clear thumbs down from the IFHA ratings panellists - the Dubai World Cup and the Japan Cup.

But the real tale of the ailing fortunes of the world’s two most famous Derbys is shown in the figures allotted to their winners - in both cases a low for the decade. And, as you can see from the stats below, these are no isolated incidents.

One outstanding winner (and three reasonable ones) aside in those ten years, the Run for the Roses is struggling to maintain its place in the pantheon. The panel make it just the eighth best race run in North America last year, and bear in mind they will have been trying their damndest to get it as high as possible.

That applies at least as much to the fabled Epsom showpiece. True, there have been three fine Derby winners since 2010, but the trajectory since 2015 has been unhappily downwards, and all the signs are that it will remain so. A mile and a half is considered the arena of the stayer these days, and sadly very few breeders are interested in producing that kind of animal.

The Italian master breeder Federico Tesio famously said, “The Thoroughbred exists because its selection has depended, not on experts, technicians or zoologists, but on a piece of wood, the winning post of the Epsom Derby.”

That piece of wood no longer seems to matter so much. 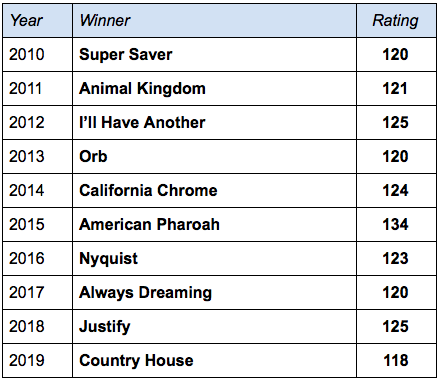 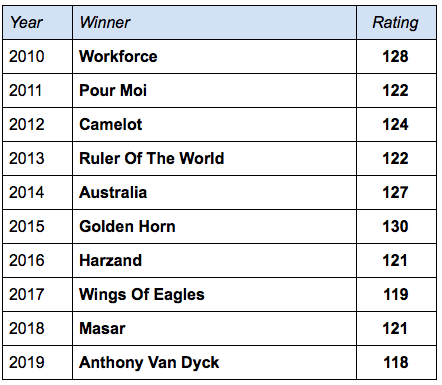