As the cooler months come around, Australia’s few remaining jumps festivals kick off, including this week’s prolific Warrnambool May Carnival. However, there isn’t a jumps meeting in Australia that goes off without animal welfare protestors these days. As the anti-jumps lobbies mobilise for a new season, Brad Waters outlines the state of jumps racing in Australia, and how the racing industry is responding to stabilise its jumping future.

If you arrived at this story looking for a passionate argument on the pros or cons of Australian jumps racing, you’ll be disappointed, because sometimes it’s necessary to just tell it like it is. In Australia, jumps racing has long been a testy and polarising issue, and, without favouring one side or the other, there are questions that need to be asked. What is the state of play with the sport in this country at the moment, and how long can we expect the “will it survive, won’t it survive” battle to go on?

Well, for a long time really, because jumping in Australia has a future for at least the next few years. While Racing Victoria has worked hard on the survival of the sport, albeit conceding that more must be done to secure its future, the animal-rights lobbies have made it very clear they will not stop campaigning against what they deem to be a very cruel sector of the industry.

The debate has been extremely emotional. Trainers, their staff, jockeys, and breeders, believe a ban on hurdle and steeplechasing will threaten their livelihoods, and also leave other parts of the industry exposed to the animal activists – in particular, 2-year-old racing and whip use. In their eyes, it is a misrepresenting campaign too. Jumps racing in Australia occurs only in Victoria and South Australia, and comprises only 1.75 percent of races run in those states. But negative mainstream coverage of jumping accidents accounts for most of racing’s bad press these days, especially at this time of year.

To be fair, the term “Australian jumps racing” is a touch misleading, given the sport occurs in only two states. Let’s take a closer look at this.

New South Wales remains the only state in Australia to officially outlaw jumps racing, passing legislation that banned it in 1997. Queensland hasn’t had consistent jumping for 100 years, while the last steeplechase in Western Australia took place in 1941. In Tasmania, lagging interest forced the scene to go under in 2007. Meanwhile, in 1991, a federal senate select committee recommended jumps racing be phased out over three years on the grounds of animal welfare, but that hasn’t happened. Yet.

Comparing the two states where jumping still goes on, Victoria is on a much firmer footing than South Australia. The latter whipped up a storm of industry displeasure earlier this year when its racing minister, Leon Bignell, declared the sport was outdated.

“I would like to see jumps racing phased out, and I think most of the public would,” Bignell told the media. “I think most people would say that jumps racing is a thing of the past. It’s one of the areas [for which] I get the most correspondence.”

The power struggle in South Australia has been epic, and very public. Last month, a member of the Greens Party attempted to submit legislation that called for a ban of the sport. A similar attempt was made in 2011. However, the real problem is that the governing body of racing in the state – Thoroughbred Racing South Australia (TRSA) – seems to have differing views on the survival of the sport to those of the South Australian Jockey Club (SAJC), which hosts jumps racing at Morphettville. The SAJC wanted to scrap hurdle and steeplechase events altogether, but it was overruled by TRSA. Morphettville is South Australia’s only city venue, located in the southwest suburbs of Adelaide, and, under the TRSA overruling, it scheduled six jumps meeting for 2015.

But what’s at stake if the Greens' bill becomes law?

Well, the Easter carnival at Oakbank would be the major casualty. Located east of Adelaide in rolling countryside, this two-day carnival brings an estimated $47 million of revenue to the South Australian economy. However, of the 16 events on the carnival’s card, it must be admitted that only four are hurdle or steeplechase events (the Great Eastern Steeplechase over 4,950 metres is the feature of these).

In Victoria, the major jumping festival occurs in the first week of May – the three-day Warrnambool May Carnival. Traditionally, it features seven races over obstacles out of a total of 29 contests. It is this meeting that hosts Australia’s longest race, the 5,500-metre Grand Annual Steeplechase, worth $250,000 this year. Warrnambool City Council believes the carnival brings $23 million of economic benefit to the area, which sits 260 kilometres (160 miles) east of Melbourne along the coast.

The Oakbank and Warrnambool carnivals are known as festivals of jumping, but neither is an exclusively jumps event. Only a quarter of the programmed races actually involve jumping. They fall a long way short of their celebrated cousins in England and Ireland – Cheltenham and Punchestown respectively – and this highlights a few major points of difference between how jumping is done in the British Isles, and how it is done in Australia.

Australian jumpers are predominantly tried flat horses, many found to be too slow before going on to enjoy some success over obstacles. Trainers often source horses from interstate stables, or pick them up cheaply at racehorses-in-training sales. Unlike the British and Irish code, Australia has no specific breeding industry devoted to producing National Hunt horses. For instance, there is nothing like Coolmore’s Grange and Castlehyde studs, which house exclusive National Hunt stallions. As a result, there is a limited supply of horses available for jumping in Australia.

The sport also has to contend with a significant percentage of Australian owners that remain averse to sending their horses over hurdles and steeples. It is often considered a demotion for a flat horse, and this was demonstrated recently when the imported Glencadam Gold, once trained by Sir Henry Cecil and who, under Gai Waterhouse, won the G1 Metropolitan Handicap in glittering fashion at Randwick, ran out of form on the flat and ran into jumping. There was a poor social-media response to this move at the time, but Waterhouse insisted it was good move for the horse.

In 2009, the Warrnambool carnival went within a whisker of losing all of its jumps racing when the sport was stopped for a short period. This was a response to a disastrous run when three horses died in two days at the meeting. At the time, Racing Victoria announced the sport would cease altogether after the 2010 season, but it changed its decision after an industry backlash and a deep review of the entire hurdle and steeplechasing environment by retired judge David Jones. Racing Victoria implemented many of Jones’s recommendations, including the installation of a specialist “Jumps Review Panel” to oversee the running of the sport. However, at the 2011 Warrnambool carnival, lobbyists got further fodder for their campaigns when loose galloper Banna Strand, after unseating his jockey at an earlier fence, leaped into a group of spectators, injuring seven. 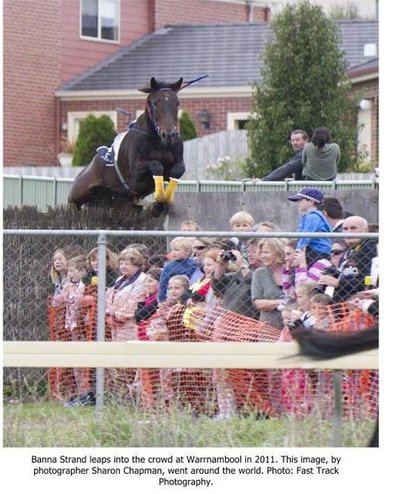 At that time of David Jones’s recommendations, there had been a change of government in Victoria. The incumbent Labor government, including its racing minister, had been anti jumps racing, but when the Liberal Party replaced it, things changed dramatically for the future of the sport. Dr. Denis Napthine was the local representative for Warrnambool, and he became the state’s new racing minister. Dr. Napthine was a vocal supporter of jumping, and when he went on to lead the party, becoming Victorian Premier in 2013, the sport was never threatened during his tenure.

In late 2014, Napthine and his party lost office to the Labor Party. However, the incoming government spared itself a decision on the controversial future of jumps racing by declaring that Racing Victoria was the only decision maker with the right to decide the sport’s fate.

Bernard Saundry is Racing Victoria’s chief executive. He knows the organization faces terrific challenges in the coming years. Racing’s share of the wagering dollar is shrinking as it competes with rugby league, Australian Rules football, and cricket, and, jumps racing has traditionally struggled to attract wagering dollars. This is something that Racing Victoria is tackling.

It has injected substantial prize money increases into feature jumps events, all the way down to tenth place in a race. Racing Victoria has also made qualifying for jumps races easier by scheduling more trials to accommodate trainers in the east of the state, who are geographically further from Warrnambool. Saundry said Racing Victoria must continue to drive participation in the sport to ensure it survives, because the figures can be damning.

For instance, in 2001, an average of 9.45 horses started in every jumping race in Victoria. However, in 2014 this figure was only 7.1 horses. An Australian race must have eight starters before betting agencies will pay out on win, place, and each-way (show) bets, so Victoria’s aim is to produce an average of 8.22 runners per race in the 2015 season.

“The sport’s participants are acutely aware that jumps racing needs to increase participation and field sizes to ensure it retains interest levels from a wagering perspective,” said Saundry.

He added that Victoria’s pari-mutuel operator, Tabcorp (TAB), which is a joint-venture partner in the industry, is not too concerned with the lack of wagering interest in the state’s jumping code, and would not be affected by either the abolition or retention of the sport.

“We conduct approximately 70 jumps races in Victoria each year, out of more than 4,000 TAB races,” Saundry said. “Jumps racing is not a major focus of the TAB, and it’s unlikely that removing jumps racing would result in a dramatic shift in turnover.”

On the one hand, this suggests that jumps racing is insignificant in the greater climate of horse racing. This will certainly play into the hands of the lobbyists. On the other hand, without pressure to be making money for Tabcorp, jumps racing in Victoria can decide its own future. Providing hurdle and steeplechase racing has offered failed flat horses a second coming, an opportunity to continue on with their careers when they could otherwise fall upon a different fate. And, there is widespread industry support for the code to survive in Australia’s southern states. Even top-tier flat trainers like Gai Waterhouse hold jumps licenses.

In the short-term, at least, jumps racing will continue in Victoria, as will the protests and lobbies. In South Australia, parliament will debate the merits of the Green’s bill to abolish the sport when next it sits. In other words, neither side will be giving in, so on the battle goes.