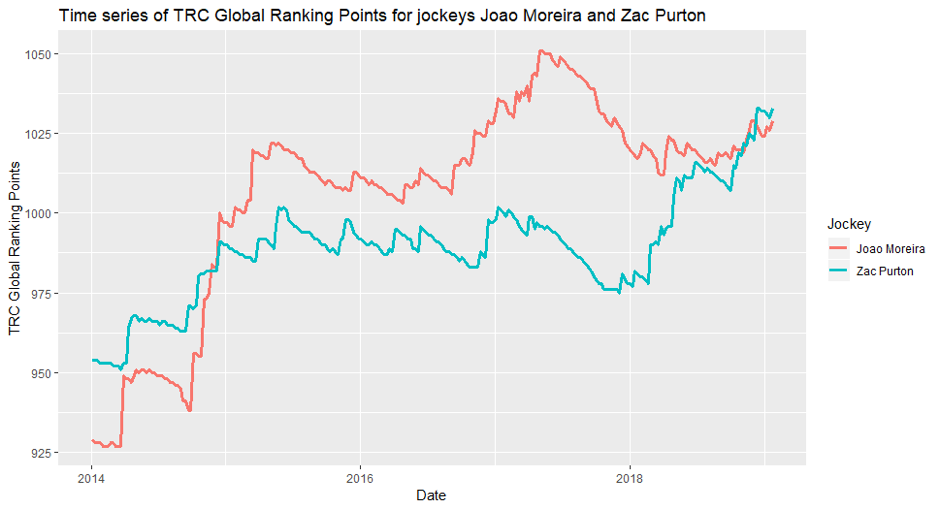 As the accompanying graph of their TRC Global Ranking points across time shows, Purton had a terrific 2018 – just as Moreira seemed a little out of form and was flirting with a move to Japan. It wasn’t until recently that Purton hit the front, but there is only four points in it currently. Both men bring the best out of each other on the track.

A clear winner this week, despite only 12 races being added to our classifications. GARY BARBER ET AL (+4pts, #19 from #24) landed a pair of G3s, the Toboggan at Aqueduct (with Solid Wager, by #419 sire Birdonthewire) and the Lecomte at Fair Grounds (with War Of Will, by #28 War Front).

Barber’s pink-and-black colours are a fixture on U.S. courses. He is the Chairman and CEO of Metro-Goldwyn-Meyer and co-founder of Spyglass Entertainment. Notably, he was also the executive producer of the popular 2003 racing film Seabiscuit.

A 1-3 for partnership MICHAEL & MATTHEW PITMAN (+11pts, #130 from #222) in the G1 JR & N Berkett Telegraph is enough to garner another TRC weekly award for a New Zealand-based competitor. Enzo’s Lad, a son of #183 Testa Rossa landed the big-prize, while #137 Dream Ahead colt Sesei reached a place.

It was a close finish, with Enzo’s Lad defending his title in the big sprint.

We are particularly pleased to make this award to the Riccarton-based father-and-son team because senior partner Michael underwent surgery for bowel cancer towards the end of last year.

A quinella for a sire is a notable accomplishment in Group or Graded races, though not that rare (it has happened 426 times since 2011). Nevertheless, by means of a 1-2 in the G2 Cape Verdi at Meydan, it is our world #1 sire DUBAWI (no change) who wins yet another TRC Sire of the Week title – his second consecutive award after he sired the 1-3 in the G2 Maktoum Challenge Round 1 at the same venue last week.

In so doing, Dubawi extends his lead still further over Galileo (-1pt, stays #2) at the top of the sires’ charts. The latter’s performance is, of course, more seasonal than Dubawi’s because he scores so many points in Ireland and Great Britain and does not own the same capacity as Dubawi to get winners on dirt. Still, we fully expect the magnificent Coolmore sire to go in stern pursuit in 2019, and it should continue to be an enthralling duel.

Notable among stallion 1-2s is #31 Tapit’s provision of dead-heaters Sweet Loretta and Pretty City Dancer in the G1 Spinaway Stakes at Saratoga in 2016, and #43 Exceed And Excel’s emulation of the same feat in the G3 Blue Diamond Prelude  at Caulfield in 2013.

The 12 stallions who have had at least five Group or Graded 1-2s in races that count towards our standings are listed in the table, ranked by the number of times they have achieved this and including the latest occasion. Appearance in this report is primarily a function of potency, but also provides evidence of the particular specialism of the stallion’s progeny.