About 15 years ago, a young woman arrived in the grandstand medical office at the track then known as Philadelphia Park. She needed a physical examination before she could reactivate her lapsed jockey license, and I was the assistant track physician on duty that day. Little did I know, this relatively routine encounter would change my life.

She was not one of those jockeys who never quite get the riding bug out of her system. Returning to the jockeys’ room was a necessity, a matter of family survival. She was intelligent and well-spoken, which contrasted starkly with her threadbare attire. She also was well educated, with a bachelor’s degree from Temple University, where I had earned my medical degree. That, too, contrasted sharply with her fellow jockeys, many of whom never obtained a high-school diploma and learned a lot of their lessons in the school of hard knocks.

I completed the examination and filled out the requisite forms, but I was curious. Why was she returning to a desperately difficult job, one that demands so much of the human body and wreaks havoc on that body when it suddenly meets the racetrack surface at high speed? Never shy, I asked. She had been a journeyman jockey some years back, but her husband’s job as a civilian naval employee had allowed her to leave the racetrack. He later accepted an opportunity for early retirement, opting for a lump-sum payout of his accrued benefits rather than a pension with medical benefits. He had planned to start up a business and continue the family’s comfortable lifestyle.

It didn’t happen. Not long after he retired, he developed rapidly progressive multiple sclerosis. Medical expenses burned through the retirement nest egg, and even Social Security disability payments did little to make a dent in their mounting expenses. As so often happens, a medical crisis had taken them from a comfortable lifestyle to poverty in a matter of months.

To make ends meet, the wife went back to the one type of work that she knew – riding horses. She was galloping in the mornings and hoped to mount a comeback by riding races in the afternoon. But the road back was by no means smooth. Shortly after her comeback, she had a morning spill and broke several vertebrae. Because racetrack workers rarely have health benefits, they almost always go back to work before they are fully healed. Not too long after the fall, she was in the medical office again to get my medical stamp of approval so that she could resume race riding.

This jockey and her family had fallen through the cracks of a health system that was broken then and arguably is broken to this day, despite some improvements under the Affordable Care Act. Except for my part-time gig at the track, I had retired from practice and could view the field of health care with a wider lens. I wondered, if this could happen to a well-educated person who had had a middle-class lifestyle, what about the hundreds of workers at the track who did not have the advantage of a college education and for whom a better life is an unattainable dream?

As much as I love racing and the racetrack, I had never been in the stable area. I was enamored of the sport’s pageantry, although after five years as the jocks’ doc, I had seen some of the sport’s underside. I was curious about the kind of health care that was available on the backstretch and whether I could assist in any way. So, I went into that strange, cloistered world. It was a disturbing voyage of discovery and enlightenment, and not a lot has changed in the intervening years, even though the track added slot machines in 2009 and became a money machine.

When I drove through the stable gate the first time and made a right-hand turn on the stable road, I had an epiphany. On my right, across the road from the barns, were concrete-block structures that were euphemistically referred to as dormitories. They were not college dorms, by a long shot. Roughly 10 feet wide and eight feet deep with narrow windows, they more closely resembled jail cells, and they did not have the amenity of a toilet that you’d find in a prison cell. The toilet facilities and showers were in the middle of each block of 12 dorm rooms. The rooms themselves were hot as blazes in the summer and drafty in the winter.

In all, approximately 200 backstretch workers lived in these Third World conditions. I’m told by knowledgeable friends that the Philadelphia Park dorms were better than facilities at some tracks, where workers still slept in tack rooms. The veritable rabbit warrens that I found were the abode of people who had to be close to the horses in their care and could not afford an apartment outside the gates on their weekly paychecks. They also are the residences of a few who are lost in mental illness and many more trapped in alcoholism or drug addiction. Another 500 to 600 workers lived off the track and arrived early every morning to care for the more than 1,000 horses stabled at the track.

With that one trip down the stable road, I decided to do something. I knew I could not fix the grinding poverty and impairment that was so readily apparent. But I remembered a Talmudic teaching that, even though you cannot solve all the world’s problems, you are not released from the obligation of doing your part to repair the world. I resolved to do my bit, as modest as it might be.

I soon found that the backstretch workers were not entirely on their own. Chaplain Rick Bunker from the Race Track Chaplaincy of America did his best from the recreation hall, and student community-health nurses from LaSalle University visited every Tuesday and Saturday mornings with their instructors. They screened for diabetes and hypertension, taught nutrition and smoking cessation, and launched the annual flu vaccine and pneumonia vaccine campaigns. My dreams and plans of improving backstretch health care began to take shape as I aligned myself with the nursing team and the chaplain. It was time to turn my epiphany into something more tangible. 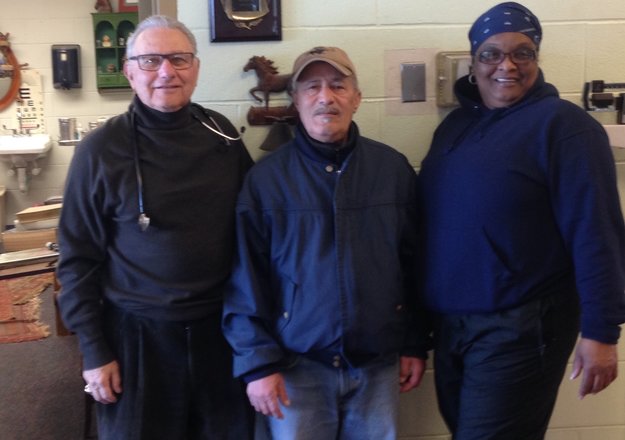 At that time, Donald C. Le Vine, the senior association steward at the track, was dying of cancer. He was one of the people that I most admired at the racetrack. Well over six feet tall and impeccably dressed, his regal appearance perhaps came naturally. His wife of 45 years was Lizanne Kelly, the younger sister of Grace Kelly, who went from the East Falls section of Philadelphia to Hollywood to Monaco, where she reigned as Princess Grace. Don Le Vine had been a stockbroker, a horse owner, and a horse trainer before finding his calling in the stewards’ stand.

In his failing days, he came to my grandstand office for medical aid and comforting. I was impressed by his courage and grace even under the direst circumstances. I did the best that I could for him as cancer consumed his body if not his spirit, and I determined that the finest tribute to this fine gentleman would be to open a free backstretch walk-in clinic in his honor. I wanted him to see it before he died. Words of appreciation and gratitude are best spoken to the person in the flesh rather than over a casket. Perhaps I started too late or was not sufficiently persuasive with horsemen or track management. Don Le Vine died in December 2000 at age 72, the clinic still a dream.

If not in his honor, then in his memory. After his death, the track’s horsemen and administrators welcomed the idea of honoring his memory with a medical clinic. And so it happened. It wasn’t a grand space, assuredly. The clinic would occupy a former smoking lounge and card room in the rec hall that was badly in need of cleaning and fumigation. Once the smoke stains were scrubbed off the walls. I filled it with the equipment I had put in storage after closing my private practice. (I knew it all would come in handy at some point.) I dovetailed the clinic with LaSalle’s triage clinic so that I could provide backup for complex cases needing further evaluation, referral to county health clinics for testing, or even hospitalization.

On Aug. 18 2001, we cut the ribbon on the Donald C. Le Vine Memorial Clinic, where I can be found almost every Tuesday morning struggling with my Spanish and sharing my medical expertise with my adopted community. For nearly 14 years, I have had the joy and privilege of working with the chaplain and nurses in ministering to the needs of the residents of our backstretch village. The hard-working people who take care of the racetrack’s horses deserve no less. I am forever indebted to that lapsed jockey who walked into the frontside medical office and started me on this miraculous journey. I’m still the jocks’ doc, but I am for a few hours every week the backside doc, too.