The racing landscape is very different from the one of three decades ago. However, for all the industry’s attempts to keep up with the rapid pace of the outside world, racing also remains a sport that lends itself to tradition, one in which enduring institutions enjoy the scope to thrive and prosper.

The G1 Juddmonte International is a prime example. For many of the younger fanbase, the race - one of year’s most eagerly anticipated European G1s, which is run at York’s Ebor Festival in August - has always been known as the Juddmonte International. In that, there maybe a tendency to take its title and its meaning for granted; you will often hear racegoers alluding to the race fondly as just ‘the Juddmonte’.

Of course, that is primarily a result of Juddmonte’s long hold over the race, which began in 1989 following a brief stint as the Matchmaker International. And, in the 29 years since, the race has continued to grow in stature, so much so that in 2015 it was declared by the International Federation of Horseracing Authorities (IFHA) as the best race in the world.

Juddmonte’s high standing within racing has been achieved via years of thoughtful management by Prince Khalid Abdullah and his team. 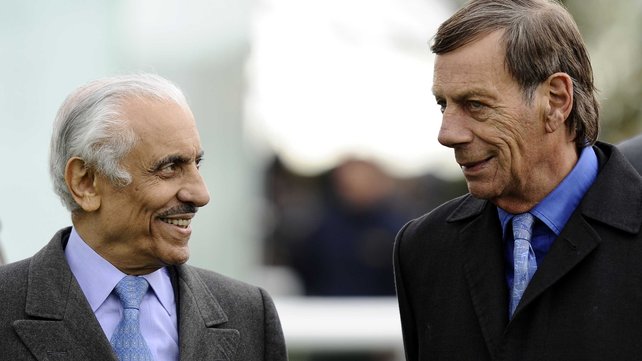 The majority of the broodmare band descends from purchases made in the 1980s; until recently, Juddmonte rarely invested at public auction, yet it was precisely such a move that gave them Arrogate. In turn, the stallion operation has long been respected as select but powerful, which remains the case today with a roster that is headed by Frankel, Arrogate and Kingman.

Juddmonte’s evolution as a major sponsor is also reflective of the ambitious yet measured approach that Abdullah has followed since he made his first foray into racing with the assistance of Humphrey Cottrill during the late 1970s.

Each of the seven races under its umbrella are elite events that invariably assume a pivotal position within their respective programmes. For instance, the portfolio includes three of Newmarket’s flagship juvenile events - the G1 Middle Park Stakes, G1 Cheveley Park Stakes and G2 Royal Lodge Stakes, which make up ‘Juddmonte Day’ in September -  in addition to the G1 Pretty Polly Stakes at the Curragh, the G1 Grand Prix de Paris at ParisLongchamp and the Juddmonte International, which remains the flagship title. In America meanwhile, Juddmonte has committed to the G1 Spinster Stakes at Keeneland since 2005.

“Prince Khalid’s passion for horseracing and breeding spans more than 40 years,” says Douglas Erskine-Crum, chief executive of Juddmonte Farms. “His enthusiasm and knowledge has been the driving force behind Juddmonte’s pre-eminent position today.

“We also recognise, importantly, that Juddmonte’s success would not have been possible without the support of the breeders who use our stallions nor, on a wider level, without the contribution of everyone across our industry. Our sponsorship strategy is one way in which we can ensure we are giving back to our sport in Europe and the USA and saying thank you, in particular, to our clients, supporters and friends.”

When the International assumed the Juddmonte title in 1989, it already had an illustrious history behind it, one that had begun with Roberto’s shock defeat of Brigadier Gerard in the inaugural 1972 renewal, when it was run as the Benson & Hedges Gold Cup.

A number of titans of the turf have won it in the years since it came under Juddmonte’s stewardship, among them Giant’s Causeway, Sea The Stars and Australia. Especially fitting, however, were the victories of Juddmonte’s Twice Over and Frankel for Sir Henry Cecil in 2011 and 2012. Frankel, in particular, was instrumental in the race earning its IFHA recognition as the world’s best race.

“The entire Juddmonte team was very proud of this achievement, not least because it was Frankel’s victory in 2012 that helped propel the race to the top of the standings,” says Erskine-Crum. “We’re also very thankful to all the connections that have sent their best horses to the Juddmonte International over the years and to the top-class team at York.”

Runners will be competing for an all-time high of £1 million in 2018, making it the richest ever race run at York.

This Saturday, meanwhile, sees the 18th running of the Grand Prix de Paris under Juddmonte sponsorship. Worth €600,000, its importance has arguably been heightened in recent years due to the decision to cut back the Prix du Jockey Club to 1m 2½f, leaving it as France’s premier 1m4f event for 3-year-olds.

The Royal Lodge was added in 2006, and four years later - the year before it was switched from Ascot to Newmarket - it acted as a springboard to greater things for Frankel (see video below). Last year the race was won by the subsequent Eclipse Stakes hero Roaring Lion.

The portfolio was enhanced again in 2015 by the addition of the Middle Park Stakes, the first G1 won by Prince Khalid Abdullah - back in 1979, when Known Fact scored for trainer Jeremy Tree, and then last year by the Cheveley Park Stakes. This year, those three races will be worth a combined £675,000.

“Newmarket is the home of British horseracing and is also the closest racecourse to our European headquarters at Banstead Manor Stud, so we place great importance on supporting its programme of high-class racing and its impressive executive team,” says Erskine-Crum of the decision to extend Juddmonte’s support of Newmarket’s 2-year-old race programme.

“The Royal Lodge, Middle Park and Cheveley Park are among the most prestigious juvenile races in Europe. By significantly increasing the prizemoney for these three contests, from £460,000 in 2016 to £675,000 in 2018, we aim to show our commitment in recognising and rewarding the owners and breeders of the next generations of leading 2-year-olds.”

He adds: “The three races also hold significance for us personally. Frankel won a memorable edition of the Royal Lodge in 2010, Known Fact’s victory in the 1979 Middle Park was Prince Khalid’s first G1 win, and Oasis Dream set an all-aged course record when he won the race in 2002.

The recent additions of the Middle Park and Cheveley Park serve to underline Juddmonte’s evolving sponsorship strategy. Similar comments also apply to the Pretty Polly Stakes, which came into the Juddmonte fold for the first time this year. The race produced something of a surprise, with Barnane Stud’s Urban Fox storming clear from the Oaks winner Forever Together for a breakthrough G1 success.

“We had sponsored the G2 Beresford Stakes since 1988 but were aware that our portfolio was missing a G1 contest in Ireland,” says Erskine-Crum. “When the opportunity to sponsor the Pretty Polly came up, it enabled us to complete our aim of sponsoring top-class races in England, Ireland, France and the USA, the countries in which the majority of the breeders who support our stallions are based.”

As alluded to by Erskine-Crum, Juddmonte has established a fine record in its own races. They have won all bar the Pretty Polly Stakes at least once in the past decade, although none have been more fruitful than the Grand Prix de Paris, which has been won by four Juddmonte colts in the past 18 years. Beat Hollow got the ball rolling in 2000 before Rail Link became a valuable first G1 winner for Dansili in the 2006 edition en route to landing the Arc. Two other sons of Dansili, Zambezi Sun and Flintshire, subsequently followed suit.

Juddmonte is not represented in tomorrow's race, but it promises to be a cracker nonetheless, with Epsom Derby runner-up Dee Ex Bee, Queen’s Vase winner Kew Gardens and two progressive French colts, Neufbosc and Folamour, in the line-up.