A graphic reminder of the dangers facing jockeys was provided by the horrendous fall of Australian Tye Angland at Sha Tin on Sunday. The 29-year-old carries all the best wishes of everyone at Thoroughbred Racing Commentary as he bids to recover from this terrible accident.

It isn’t just in races where dreadful accidents can happen. In August, Angland’s compatriot Blake Shinn suffered a serious neck injury in a fall in a barrier trial at Randwick. There is never a good time for something like that to happen, but the timing was particularly poor in Shinn’s case because he was having the kind of season that TRC Global Rankings rates highly.

The good news is that Shinn is on target for a return some time in the New Year. Owing to his data, we will go ahead and make the prediction now that 2019 will see him climb the rankings sharply from wherever he is rated upon his return.

Shinn is seriously good. TRC Global Rankings places greater emphasis on efficiency than volume. Most other places, you will read little beyond the aggregation of wins or prize money as evidence of the efficacy of the humans involved in the sport. Not here. Aggregation (sample size) only counts because it provides more of a guarantee that observed performance will be reproduced.

For this reason, we had Shinn at world #8 formerly while other approaches would have had no chance of recognising his ability. He reached that ranking five times: twice in May 2015 and three times between April and June the following year. In the rankings of June 5, 2016, Shinn had 49 wins from 332 Group-race rides (15 percent) in the three-year window, with a triple-slash of 8/18/23 in G1/G2/G3 while competing in strong, competitive races against other riders we rated highly at the time.

Of course, we were nowhere near the first to this particular party: Shinn had sprung to international acclaim when winning the 2008 Melbourne Cup on Viewed for Bart Cummings. And you don’t get the job as stable jockey to Gai Waterhouse – as Shinn did in 2007 – without knowing exactly what you are doing.

There is a natural variation in a rider’s results that has nothing to do with his or her talent. Bearing in mind Shinn’s former ranking, we were keeping an eye on him in the TRC office. And, in the first few months of this year, he did not disappoint.

To get the most out of racing data, you cannot just add up wins. For a jockey, all you are doing there is measuring opportunity – not efficiency. Strike rate (wins divided by runs) is barely much better in truth. Think how much of the information provided by a result is being thrown away.

The fact is that racing statistics are analysed in a way people would think it crazy to assess a football team, for instance. In other sports, there is an acute awareness of the number of games played, but also the strength of the opposition. Why else does every team play every other team in a league? To equalise an important concern in sports called ‘strength of schedule’.

TRC Global Rankings is the only published ranking of the humans and sires involved in the sport that makes allowance for every interaction between every competitor in Group and Graded races around the world.

To reach a better understanding of how we do it, let’s look at the head-to-head records of the ten highest-ranked jockeys whose Modal Country (the country where they have had the most rides in Group/Graded races in the last three years) is Australia. The results for 2018 Group races are contained in the table: 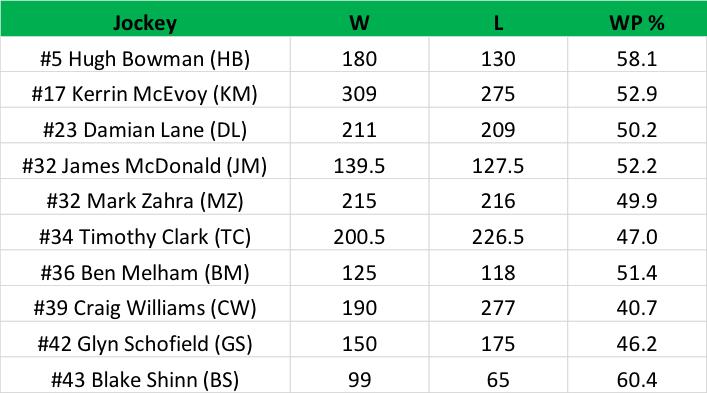 The jockeys have their current world ranking as a prefix. The colums ‘W’ and ‘L’ indicate Wins and Losses in these head-to-head match-ups. Now, the significance of all these is by no means the same. When a jockey finishes in front of another – and thereby registers a W – it counts for a lot more if he wins the race and his rival is second, rather than he finishes ninth and his rival is tenth.

So, we apply weights to these results. We weight by the recency of the race, the quality of the race (better races are the most competitive), the size of the field (bigger fields are more chaotic because of the draw and interference, and a host of other factors). But one of the things that is the most important in winning a head-to-head match-up is the quality of your opponent.

TRC Global Rankings builds up an absolute massive network of interactions to solve the problem of where all the world’s riders deserve to be in the hierarchy of dominance. Notice we did not say ‘skill’. The quality of the horses is still paramount, of course, but there is a correlation between which jockeys get the best rides and which jockeys are the most skilful – even if the correlation is nowhere near perfect.

Look again at the table. The third column is Win Percentage, the percentage of all the head-to-head match-ups won by each rider against his elite colleagues. We can drill down even further using the next table, which details the individual match-ups that make up each total:

Each jockey is represented by the same initials as in the first table. The row headed ‘HB’ for instance, shows the 2018 head-to-heads for Hugh Bowman, our #1 ranked jockey in Australia. Where Bowman has a winning record, the cell contains red type: Bowman has 34 wins and 30 losses against Damian Lane (DL), for example.

In the bottom row of the table are the results for Shinn. Note that he has a winning record against seven of his nine rivals in the top ten. This is only a small fraction of the evidence used by TRC Global Rankings, but it does provide a nice illustration of what Shinn was in the process of accomplishing in 2018. In total, he won 99 of his 164 match-ups at a clip of 60.4% - the highest win rate of any jockey in our little study here.

Shinn won on just six of his 48 rides in Group races in the first part of the year. But wins and losses are a limited binary measure of influence; our studies prove that percentage of rivals beaten (PRB) is a much more predictive metric of future success, and head-to-head records allow us to add to the power of this still further by incorporating that all-important strength-of-schedule component.

We solve the millions of equations linking jockeys, owners, trainers and sires with each other using super-fast scientific computing libraries. And, if Shinn had not been injured, he might have been able to add to wins like his four G1s on Happy Clapper (2), Who Shot Thebarman and PromptResponse for trainers like Darren Weir, Chris Waller and Gai Waterhouse & Adrian Bott, and to climb the rankings back towards his former standing.

Every week that Shinn is missing, TRC Global Rankings naturally has to place greater uncertainty over his ranking; that’s just a facet of all good systems like it. At present, he ranks #43.

Jockeys who achieve good head-to-head records are usually those who ride closest to the clock. Their results are consistent, not skewed by being repeatedly far off ideal pace. They win all the races they should and some of those to which they were not entitled.

There is a lot more to Shinn’s data than just the 2018 head-to-heads. But this is a nice snapshot that reminds us of how competitive he was with the best around in a very strong colony of riders in Australia in 2018.