There was no grand idea at first. Jerry Brody and his wife Marlene, simply wanted to have a little farm upstate in Columbia County, New York. Horses weren’t even in the picture.

Today, that little farm is the picture of a success story. On 630 acres of beautiful, rolling hills, with the Catskill Mountains rising above the horizon to the west, horses peacefully roam on Gallagher’s Stud Farm in Ghent, New York.

The Brodys have had success just about every way one can in horse racing: breeding, selling, and racing. Gallagher’s Stud is a well-known name not just in New York, where they have been a fixture, but around the world, as well. Jerry Brody passed away in 2001, but Marlene still owns and operates the farm.

Gallagher’s Stud has always used a unique business model in taking advantage of the New York-bred program. While the farm has had a few stallions over the years, it is largely known for only having mares, breeding them to whichever horses they choose, and then dropping the foals back in New York.

But first, there were cows. Jerry Brody, a prominent restaurateur -- widely known for the Rainbow Room, Four Seasons, Oyster Bar in Grand Central Terminal, and Gallagher’s Steak House, among others -- and Marlene rented a house on a farm in Columbia County in the beginning. The original property, rented in 1973, came with a caretaker and resident animals, but the animals had to be sold during that decade’s economic downturn. With grandchildren due for a visit, the Brodys began to consider other occupants for the pastures. Given Jerry Brody’s restaurant interests, cattle seemed like a natural choice.

“We choose Angus,” Mrs. Brody said, “not because of the steakhouse, but because we were curious to know which animal really provided the best USDA prime beef. Angus matured the fastest and marbled the fastest - and those black animals look nice against either white snow or green pasture.”

It didn’t take long for the Brodys to turn those first few cattle into a prize-winning herd, and they purchased their own property in 1976. After acquiring his own farm, country life truly began to suit Manhattan native Jerry Brody.

“He really started to like it, and I was delighted because I’m a country girl,” said Mrs. Brody, who was raised on a tea estate in Sri Lanka. “One day he said, ‘What do we do now?’ And I said, ‘Horses?’”

The Brodys bought their first Thoroughbreds - three - at the 1978 Saratoga yearling sale. Among that group was a filly that the couple named Manhattan Gal - the same name that Mrs. Brody had given to their Champion Heifer. The equine Manhattan Gal became a minor stakes winner, earning $153,891 over a 21-start career, and the Brodys had their start in racing.

The couple kept both horses and cattle into the ‘80s, purchasing contiguous properties around them to build the larger farm that is home to Gallagher’s Stud today. Part of the catalyst for their start in the horse business was the decline of the dairy industry in New York, which led to incentive programs for horse breeding. After dispersing their cattle stock in 1987, the Brodys began to concentrate exclusively on Thoroughbreds - and they did it their way, with a pink foaling barn that got the local equine establishment talking.

“Pink is a nice, bright color,” Mrs. Brody said. “We had been to many, many farms, and all the colors were sort of drab. Indoors, where the stalls were, were drab. And we decided on skylights, and pink.

“A lot of horse people said ‘Oh, these new people, what possessed them to paint their barn pink? Of all things.’ They were terribly against it, it wasn’t classic, it wasn’t what’s usually done. So when it came to building the second barn, which was our broodmare barn, we asked our staff ‘OK, what color do you want? Green, pink, purple, brown?’ They all said pink. And pink -- especially during the cold winter months -- it really kind of lifts your spirits. So, that’s the reason for pink. The yearling barn we painted our racing colors, and the stallion barn we painted brown, but it has one pink door where the mares come in to be bred and one blue door where the stallions go out to pasture. We’ve always loved color.” 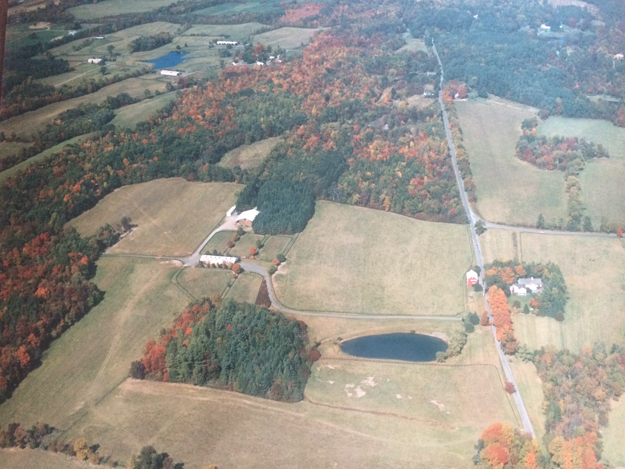 Generally, according to farm manager Mallory Mort, the farm raises horses with the plan to sell them as yearlings, though exceptions are made as need be. Sometimes horses don’t meet their reserve price and are bought back. Ironically, that was the case of the farm’s top earner, Allez Milord (Tom Rolfe/Why Me Lord), who was a buyback for about $45,000. He went on to be a G1 winner in the U.S., a multiple group stakes winner in England, and a G1 winner and champion in Germany.

“Allez Milord, we had a lot of fun with him,” Mrs. Brody said. “He took us all over the place. He came in second by a smidgen in the [Japan Cup in 1986]. They had us waiting 15 minutes to decide who had won it, but that was…it really was incredible.”

Over the years, Gallagher’s Stud Farm has had some stallions, but few.

“Mr. Brody did fool around with stallions for awhile,” Mrs. Brody said. “We had Lothario, then we had another one, then we had another one, but the stallion business is a totally, totally different business. And, we finally decided no, we’re not going to go into a second aspect of the horse business, we’re going to stick with just breeding and just having broodmares.”

“It’s very, very competitive in New York because the number of mares is limited and it’s really tough,” Mort explained. “When I started managing the farm in ’05, we decided that unless we had a horse that we raised that we thought would really fit the program, [then] we’d stand a stallion, but it’s like having another operation and we just decided not to do that. We stick to breeding mares and we can pick whatever stallions we want.”

Naturally, Gallagher’s Stud tries to match mares and stallions to physical strengths, trying to avoid common faults between the two, however minor they might be. Mort said that he comes up with lists of stallions each fall and that he and Mrs. Brody review hypothetical matings before making breeding decisions. 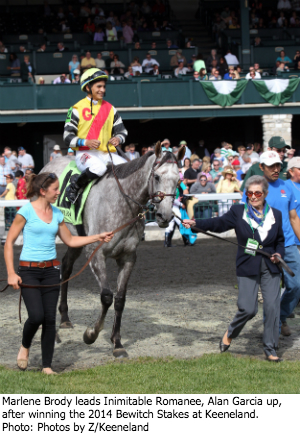 “I do love pedigrees,” Marlene Brody said. “The pedigrees matter, the hypothetical matings matter, what really matters is conformation though. It’s all combined. Conformation. Is this mare going to fit with this stallion? Mallory is a fantastic conformation person, and has turned out to be, I think, almost as passionate as I am about breeding a great racehorse.”

Two weeks into April, Junoon had given birth to a colt by Freud; Wild Chant a colt by Medaglia d’Oro; Honoria a filly by Street Cry; Hostess a Giant’s Causeway filly; Tulipmania a colt by Animal Kingdom; Fanfire a colt by Kitten’s Joy; and Adorahy a Bernardini filly. The farm, which employs 10 people, expects a few more births this season.

Mort said the farm will probably sell a few mares this fall.

Of course there are occasionally horses that Brody has bred but wants to keep for herself. One such case is the 5-year-old mare Maximova, a stakes winner and graded-stakes-placed who is trained by Christophe Clement.

“We bought her mother, Honoria at Keeneland November,” Mort said. “It’s not terribly common to see a mare come through the ring in foal to Danehill Dancer, so we purchased her for $250,000, and Mrs. Brody told me immediately, ‘If she has a filly, I’m keeping her to race her.’”

Gallagher’s Stud has also been progressive on aftercare. A longtime supporter of the Thoroughbred Retirement Foundation, and more recently Saratoga War Horse, the farm tries to keep tabs on all their horses. Mrs. Brody is especially pleased to see them go on to productive second careers.

Recently, two horses that Gallagher’s Stud bred have found notable success since retiring from the track. The popular Icabad Crane has turned to eventing, while Dundee has made a name for himself in dressage. They’re not all so distinguished, but Gallagher’s Stud does whatever it can to ensure its horses have happy lives when their racing careers are finished. Sometimes, Mrs. Brody simply brings them home.

“I have quite a few retirees on the farm, and whenever I die, they will be taken care of until they die,” Mrs. Brody said, noting that the farm has been put under conservation and its preservation as green space is of the highest priority.

Trainer Graham Motion conditioned Icabad Crane, though for a different owner, and Inimitable Romanee. He’s had success working with the Brodys over the years.

Generally, Gallagher’s Stud uses several trainers, including Christophe Clement and Tom Bush. This year, Mrs. Brody sent 2-year-olds to Angel Penna, Jr. Motion has known the Brodys since he and his father came over from England.

“She’s very much hands-on,” Motion said of Mrs. Brody. “I certainly value her input. She’s experienced and she’s had nice horses all over the world, and that’s an asset.”

Mort thinks that number is the result of a combination of factors. For one, he said, the yearlings are treated as much like horses as possible, a philosophy Mrs. Brody staunchly emphasizes.

“They’re horses,” Marlene Brody said. “And we firmly believe they should be treated as such - not hothoused and all that.”

The other factor is patience. “Mrs. Brody,” Mort said, “is never in a rush.”

“I am very patient,” Marlene Brody said. “A horse doesn’t become a horse until he’s 5, so give them time. I think too many people are in too big a rush to try and make money. I think they should be respected and I think they should be given time to give their very best potential. Some are very fast maturing. Bravo – lucky me. But some are late bloomers, and they do reward you for your patience.”

While Mrs. Brody has been rewarded many times, and in many ways by the horses that have represented Gallagher’s Stud on the racetrack and in the sales ring, she has yet to fulfill one ambition: “I would love to breed a truly great racehorse, I really would. Hopefully…there’s always hope. I’ve bred some good ones, I’ve bred some beautiful ones that have sold very well. As yet, not a great racehorse.”

Perhaps not yet, but it’s no stretch to think that a great racehorse might soon spring from the carefully tended pastures at Gallagher’s Stud.