U.S. Hall of Fame rider Mike Smith would win the TRC Jockey of the Week award most weeks after his G1 double at Oaklawn on Saturday, but not this time.

Smith (+2pts, stays #2) took the Arkansas Derby and Apple Blossom Handicap, but veteran French rider GERALD MOSSE (+12pts, #37 from #47) is the week’s top climber in any category. Mosse landed a hat-trick of G3s at Newbury (2) and Dusseldorf over the weekend.

Simply put, Mosse is a huge asset to any horse. In the last couple of years, he has ridden regularly in England for a range of connections. His two wins there came for trainers David Elsworth (on Dandhu in the Dubai Duty Free Stakes) and Hughie Morrison (on G1 Melbourne Cup runner-up Marmelo in the Dubai Duty Free Finest Surprise Stakes).

In the table below we have created an index that attempt to capture the jockeys with the most diverse portfolio of stables – considering their number of wins. 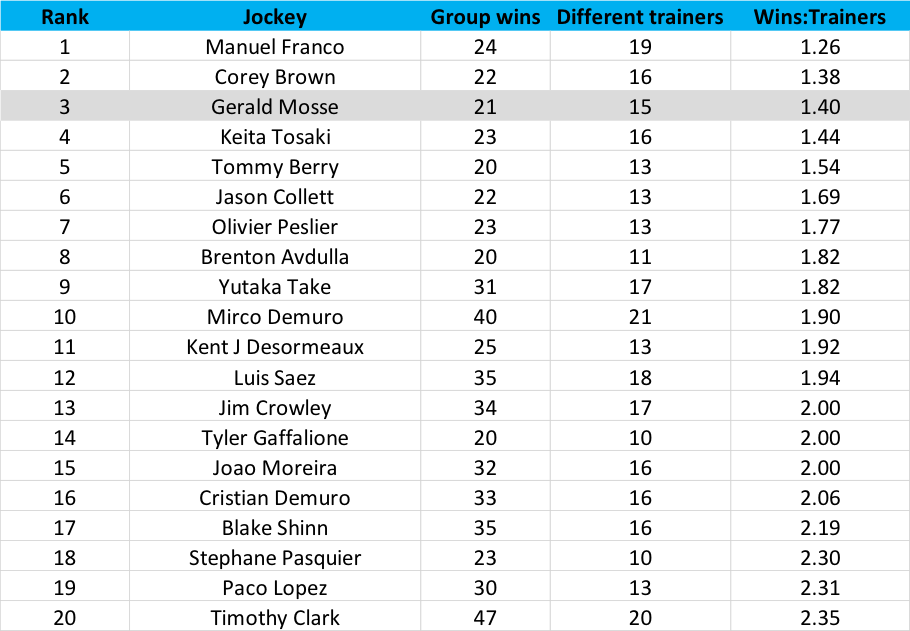 The data is restricted to those riders who have had at least 20 winners in Group or Graded races during the current rankings window. In the third column, the jockey’s total number of wins is shown, while the fourth column displays the number of different stables for which at least one win has been gained. Finally, we take the ratio of the third and fourth columns, sorting the entire table with the lowest ratios first, to show the jockeys who are associated with the most trainers considering their number of winners.