With the Dubai Carnival currently in full swing, and the big international events in Santa Anita, Melbourne, Japan, and Hong Kong fresh in the memory, the ability of racehorses to travel huge distances and still perform at their very best adds a fascinating dimension to the sport.

One man who has witnessed the growth of intercontinental racing from as close up as you can get is world-renowned veterinarian Dr. Des Leadon, consultant clinician at the Irish Equine Centre and a former president of the World Equine Veterinary Association, who has pioneered research into the effects of air travel on horses.

Dr. Leadon currently seems to spend more time in the air than on the ground, accompanying racehorses and shuttle stallions as they criss-cross the globe. Yet he still manages to run his Swordlestown Little Stud in County Kildare, along with partner Mariann Klay.

During a brief lull in his hectic schedule in Hong Kong last month, he spoke about the hazards of transporting horses on an intercontinental basis.

“It began many years ago, when I participated in a study commissioned by the Hong Kong Jockey Club, who were concerned about Europe-based horses dropping out of the international races after the Club had paid for the horses, as well their attendant owners and trainers, to come here to Hong Kong.”

The purpose of that study was to assess how to minimise the risk of infection en route and in the run-up to race day.

“There were some 36 overseas horses that year,” he recalled. “We monitored them daily before they arrived and during the flights, taking blood samples and rectal temperatures, and we recorded their body weight. We then noted how each of those readjusted after their arrival here.

“What we could demonstrate quite clearly was that there was a sort of acute phase of recovery over three days, and that most of the body weight that was lost [during the flight] would be put back on healthy horses over the succeeding seven days.

“That is why most of the international runners come to Hong Kong on the weekend before the races, because there’s a small proportion that don’t travel well and get compromised by ‘shipping fever,’ a condition which has been described for over 150 years in veterinary literature. It’s a form of pleurisy and pneumonia which arises because of the environment in which the horses are transported and the way in which many of them travel: that is, with the head held high.

“If that happens, what you get it is a spread of the bacteria which usually live in the nose and throat, down the windpipe and out into the lung tissue and then out into the pleural space.

“Shipping fever can be career-threatening, and in acute cases even life-threatening. But, if it’s caught early and treated aggressively, it won’t affect racing performance, so long as there is a sufficient interval between arrival here and the race day. The on-board monitoring is to check whether or not the horses are developing transit-related respiratory disease.”

Nor is it only racing performance that can be affected by shipping fever. “If the horse in question is an entire male,” Dr. Leadon pointed out, “running a fever can have an impact on his fertility. If the fever lasts for long enough, it can affect sperm output.

“My in-flight role is to monitor for all things that can go wrong, and react accordingly. There’s a mistaken belief among some people that just because you put horses in an aluminium tube, somehow they’re exempt from colic or damaging themselves. They’re not.

“There have been well documented instances of colic in horses that were flown to international races, and had to be dealt with at altitude – and there’s the added complication that, if there’s an intermediate stop, you’ve got to make a decision about whether you’re going on to your destination or whether you’re getting off the plane.

“We do everything we can do to stop horses injuring themselves, and obviously things get difficult if a horse lashes out at the side of the box or catches himself on a sharp edge and needs a surgical repair. That’s very bad news in the context of coming for a Group 1 race, particularly if you’re travelling half the way round the world to get here.” 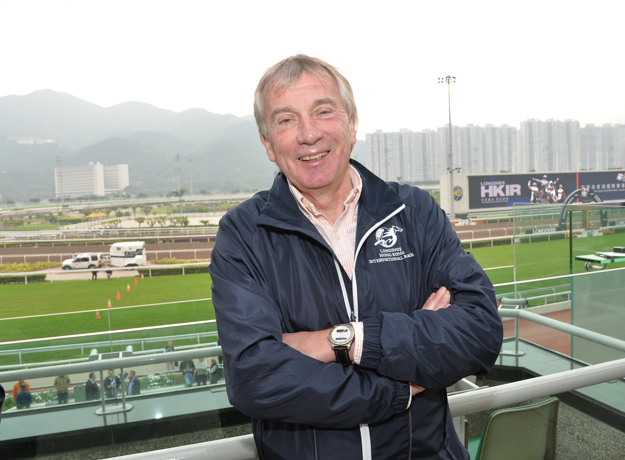 After five years of the HKJC-backed study, the Club decided that they had made sufficient investment in the programme, but Dr. Leadon continued to travel with the horses by private arrangement with trainers. “And then the agents asked me to travel here on their behalf, because the number of seats on these planes is now quite restricted,” he said. “Space is so tight that not even the horses’ own grooms get to travel with them on the plane. The home grooms don’t have the in-flight experience, so professional flying grooms go with the horses, who are reunited with their usual grooms at the other end.”

Standard routine on the outward journey is for Dr. Leadon to rendezvous with the horses at the airport – “I try to get to know them as well as I can before we set off” – and monitor their condition regularly from then until arrival at the destination.

The sensation of taking off affects different horses in different ways. Dr. Leadon said: “For horses who have never flown in their lives before, it’s obviously a completely novel experience, but most take it in their stride.

“Older horses tend not to react adversely, but on some flights horses are not the only cargo, and they can be surrounded by all manner of other freight, which might rattle or shift around around on take-off. That can alarm even an experienced horse.

“And then there is the nature of the take-off itself. Some are gentle, some much steeper, and naturally the steep take-off is more alarming for a horse.”

It is often assumed that racehorses are routinely sedated during long-haul travel, but in practice sedation is carefully rationed. “If I’m aware that the horse has a temperament, that may cause problems,” Dr. Leadon said. “And then I do sedate for take-off. But I’d prefer not to. If a horse suddenly decides that he doesn’t like this experience and freaks out, then we will certainly sedate.

“Sedation is like any other form of medication: you don’t give it unless it’s justified.

“If a horse gets really upset, he might need multiple sedations. I remember one horse going from England to Australia required sedation 17 times between Heathrow and Sydney – and on his arrival made an uneventful recovery and ran very well.

“Likewise with colic. On the way to the Middle East once we had a very high-profile horse with a nasty colic, and I had to ring the trainer back in Europe and tell him that there was a real issue. Should we continue or not? We assessed the prospect of this horse making an uneventful recovery, and decided to go on. He ran a very respectable race.

“The lesson is that a horse can have in-flight issues but still run to his best.”

As with take-off, reaction to landing varies from horse to horse, and on most flights the captain will allow the vet and flying grooms to stay with the horses until shortly before touchdown.

“On landing, horses usually brace themselves, spread their forelegs and lean against the side of the box,” Dr. Leadon said. “Landing may be a little unsettling for them, but they can cope with it unless temperament gets the better of them, in which case a little sedation is called for.”

On arrival, Dr. Leadon continues to monitor his charges for three days. “And then I usually go home, because my role is completed. I’m happy that the horses have made a good flight and an uneventful recovery from the journey.

“If there’s a horse that gets sick, then we address that issue in consultation with the local vets. If a problem is ongoing, then I’ll stay for as long as I think I need to.”

The exhilarating globalisation of horseracing over the last quarter of a century has been fuelled by a more adventurous spirit among trainers and owners, but there are also practical factors in play.

“The logistics of international horse travel have got a little bit smoother,” Dr. Leadon observed, “and in particular the equine experience has been improved by the advent of the air stable, which fits into wide-bodied jets, rather than the narrower space available on smaller aircraft. That has been a huge step forward. Before that they had to travel in narrow-bodied jets, and air stables had to be built around them, which restricted their movements. Nowadays they have more space in which to move around.”

When considering the business of equine travel, that word “temperament” is never far away. Think of the much-travelled Ouija Board (who took air travel in her stride but hated going by horsebox), or another globe-trotting Ed Dunlop-trained filly Snow Fairy, or the third Dunlop global superstar Red Cadeaux, and their equable outlook on life seemed the key to their on-track heroics.

Dr. Leadon considers the temperament question from a different angle: “Horses who easily tolerate the conditions they encounter in long-haul flights don’t lose weight, don’t run temperatures, don’t have changes in their blood, accept their surroundings, and go out and do exactly what they do at home, all day and every day. But predicting in advance whether an individual horse will fit that profile is extremely difficult.

“You can have a good guess but there’s no guarantee. And just because they’ve tolerated it once doesn’t mean that they’ll tolerate it again and again and again.

“It’s a very unpredictable process, which is why monitoring horses in transit is such a fascinating experience – and why the more I do it, the more absorbing it becomes.”