This just in: the Melbourne Cup is fast becoming ‘The Race That Thwarts a Nation’. Nobody except newly arrived Martians should have been greatly surprised by an Irish 1-2-3 in the Emirates Melbourne Cup. This time, Aidan O’Brien produced the second horse, Johannes Vermeer, and the winning trainer, his son Joseph. So, before the age of 50, Aidan has managed to secure both a legacy and an accession plan.

TRC Global Rankings long since quantified what shrewd observers have intuited; the Fearsome Foursome of trainer Aidan, owner Coolmore Partners, jockey Ryan Moore and sire Galileo are all accumulating rankings points at an accelerated rate. Our rankings maintain a solid median and do not drift upwards overall, yet O’Brien, Moore and Coolmore stand at their all-time highs, while Galileo is one point off his.

Such is the dominance of the Fearsome Foursome in the rate at which they are winning Group and Graded races that the numbers provoked a discussion between us at TRC as to whether there is a ceiling of rankings points in each category. As the ratings are predictive, it gets harder to earn more points as you acquire them, because a score of 1094 points – held currently by O’Brien - includes an implicit expectation of superior performance; some weeks, Aidan has what would be a highly successful spell for most trainers only to gain no points at all.

The distaffers are doing the damage

A detailed examination of O’Brien’s winners reveals a trend that suggests this year’s seemingly remarkable total of 27 G1 winners may not last as a record for long. The key is the increasing rate at which O’Brien is winning Group and Graded races with female horses. 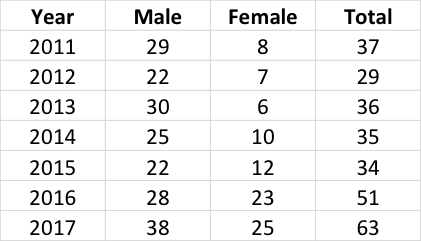 The table shows that 2017 has not been just a great year for Group and Grade 1 wins, but, arguably more importantly, in a less noisy statistic: total Group and Graded wins. These figures are illustrated by the graph.

O’Brien’s total of 63 Group-race wins has been fuelled by a surge in wins by both male and female horses, but in percentage terms it is the distaffers who are doing the damage. The average male wins per year for the five seasons 2011-2015 was 26, while for the last two years it has increased 29 percent on that to 33. But the average for the first five seasons in female wins was 9, and for the last two years the increase is 179 percent.

And, just in case that wasn’t considered a powerful enough battalion of broodmares, Coolmore have this week added Tepin (for $8m) and Stellar Wind (for $6m). 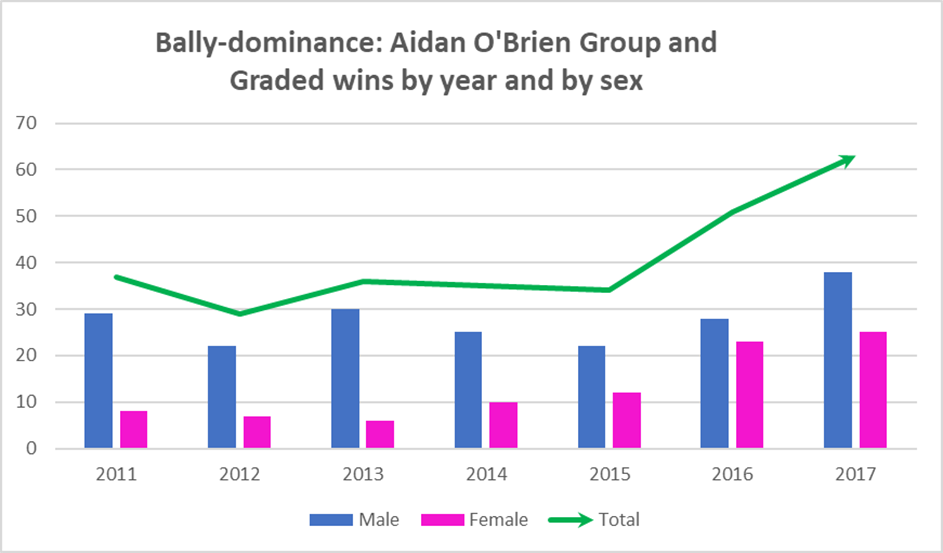 You could not make it up. But I bet you can guess what is coming next: the 91 wins by female horses trained by O’Brien since 2011 has been achieved by 48 different individuals. Can you guess which sire is responsible for the bulk of them? 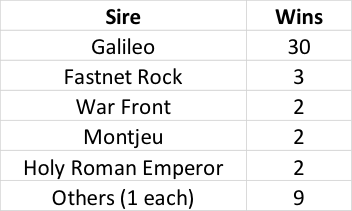 If you got that right, award yourself zero points, for everyone else did too. Now, if you are in the business of breeding horses, it is a nice thing in one way to have the planet’s most potent progenitor under your control. However, it does present a problem – homogeneity.

Collectively, the surviving and fertile members of these 48 Group-race gals are going to produce a ton of future winners between them. This is what we mean in predicting that O’Brien’s numbers may be heading further north still in future. Ballydoyle-Coolmore are about to prove that success quite literally begets success with a broodmare band of ever-increasing strength and quality, but the problem is that they cannot visit Galileo or any of his sons, such as Frankel.

In other words, two of the world’s Top 4 sires according to TRC Global Rankings – and plenty more besides – are out of bounds.

The identity of the lucky beasts to cover this harem of horse royalty will be interesting to discover, and no doubt taxes the mind of the greatest stallion man on the planet, John Magnier, on a regular basis.

For clues, we need to turn away from global Group and Graded races because the sample sizes are not big enough, and instead look to domestic results in Britain and Ireland. Which stallions have so far done best with mares by Galileo? 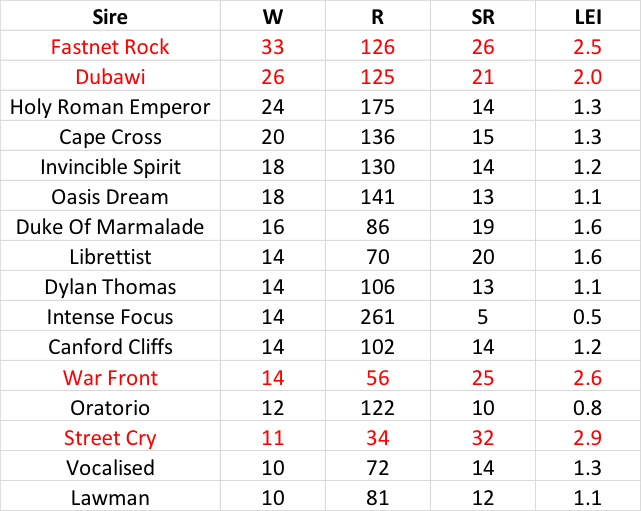 The table, extracted from the excellent Proform Professional database lists the results by sire of all runners in Britain and Ireland with Galileo as their damsire. After all, this will be the relevant combination.

SR is Strike Rate or Wins divided by Runs multiplied by 100;

LEI stands for ‘Log Earnings Index’. All we have done here is take the natural log of winning prize-money and divided it by the number of runs. The log of a number squashes extreme values back towards the mean; stallion statistics using a simple average of earnings are more skewed by a small number of big wins.

Four sires – marked in red – stand out. Street Cry is deceased, unfortunately, which leaves Fastnet Rock (TRC Global Rank #13), Dubawi(#2) and War Front (#6) as the three most potent combinations, at least according to observed data. (NOTE: data for non-Group races in Britain and Ireland which has been included here is not used in TRC Global Rankings, yet the order of influence we derive exogenously from Group races outside the two countries still holds good.)

Good news! Coolmore stalwart Fastnet Rock and the Joseph Allen-owned Claiborne stallion War Front are under Coolmore influence, but Dubawi? It’s no surprise that the second-best stallion in the world is an ideal cross for mares by the #1.

Now, until recently, the Godolphin stallion Dubawi was not an option as a mate for Coolmore mares, until a certain apparent détente between the two racing superpowers of late …