The racing public in Britain and Ireland is abuzz this week like at no other time during the year, for the Cheltenham Festival, the highlight of the racing year - flat or jumps - for most of them, begins on Tuesday. For weeks now, the main question on everybody’s minds, other than which horses will win which races, has been what the ground will be like. One man has the answer: Cheltenham racecourse’s clerk of the course, Simon Claisse.

Weather always has a major influence on racing, but never is more attention paid to it than in the time leading up these four days (Tuesday to Friday inclusive) in March.

There has been a weather station on the course since 2000. “It sits on the infield and measures a whole range of parameters, but because of the size and scale of the site, we also take manual readings in normal rain gauges because we can get quite a variation from one end of the track to the other,” Claisse pointed out. “We’ve got four rain gauges, including the two that are part of the computerized weather station.

“The beauty of it is that I don’t have to wait until I arrive here on a race morning. I can dial it up from home and see what’s been going on, which is what I did at 3:15 on the Tuesday morning of the Festival in 2013, and was horrified by how cold it was getting. It measures wind chill as well, and it gave us a reading of -12 [degrees celsius (10.4°F)], so it was a miracle that we actually survived and got the racing on, albeit running a little bit late.”

It doesn’t always work out that way. The Wednesday Festival card was abandoned in 2008 due to very high winds.

“That was interesting in that we had some sort of indication from the weekend before that the winds were going to be pretty strong, particularly on Tuesday night into Wednesday morning,” Claisse remembered. “Actually [it was] nothing worse than we’d experienced before in terms of averages and gusts, but then what happened at about 5 a.m. is we took a gust from an unusual direction here, which is from the east, so that came straight across the middle of the track.”

The main concern was for the tented village, the temporary complex constructed exclusively for the Festival.

“Predominantly our winds are from the southwest, and most of the temporary structures are protected because the course sits a little bit below a brow if you’re looking in a southwesterly direction,” Claisse said. “But this wind came screaming in from the east and did some serious damage to some of the temporary structures, as well as some of the course infrastructure.

“The norm for racing in this country is to protect your principal races each day, so there was a view that maybe on the Thursday and the Friday we’d run the Queen Mother [the two-mile Champion Chase] and the RSA [the championship event for staying novice chasers], and maybe the Neptune [one of the championship races for novice hurdlers]. Then we thought, hang on, if we’re clever, we could run the whole lot [all seven races scheduled for the Wednesday] over the next two days. And that’s what we did. It was an amazing piece of teamwork.”

That meant there were 10 races run on the Thursday and nine on the Friday. Because there were suddenly three days of runners in the on-course stabling for the last two days, horses that were still on the grounds that had run on the Tuesday were moved out and stabled at nearby Warwick Racecourse.

“We were lucky with the subsequent weather. To try and run 19 races on one course in two days could have presented us with a problem.”

Claisse tends not to look too far ahead at long-range forecasts. “The further ahead you’re looking, the more the accuracy will drop. We’re not really making plans for what we’re doing based on forecasts 10 days ahead. They might give you some indication of which way things are heading, but that’s about it.”

The Festival is held at one of the most changeable times of year, weather-wise. Temperatures can range from 15.5 [degrees celsius (60°F) to just a touch above freezing.

As well as frozen ground, high temperatures can also be an issue. “If you’ve got a really good body of grass and the temperature suddenly rises, the grass will take a lot of moisture out of the ground very quickly. That’s why we’ll go from soft [going] on the Sunday before to good by the Friday. “

Cheltenham sits hard by Cleeve Hill, on the edge of the Cotswold Hills, in what could be termed a natural amphitheatre. A bowl, so to speak. This generally leaves it protected from some of the severest elements. But not always. 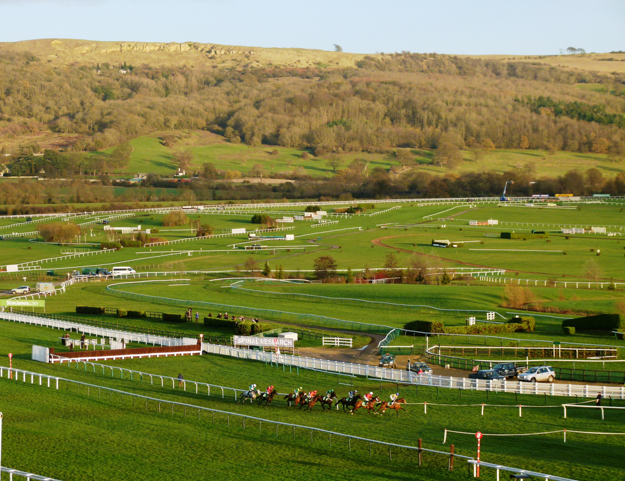 On Festival Trials Day, Jan. 25, 2014, a sudden and severe squall came up just before the runners headed into the paddock for the Cleeve Hurdle [a G2 race over three miles].

The wind picked up, there was thunder and lightning, and the old big screen by the paddock started spinning around, leading to ground staff cordoning off the area and the unsaddling enclosure not being used. “It broke its shear bolt,” Claisse explained. “There’s a safety mechanism on there so that if the wind is of a certain strength, rather than the whole thing blowing over, the shear pin goes so that it can properly rotate.” Racing went ahead after a short delay.

It was recently replaced by a new screen, part of ongoing construction, which is built to withstand 100-mile-per-hour winds.

Cheltenham most definitely has its own microclimate, as Claisse can attest:

“We can often be here watching rain fall around us, and people will say, ‘I can’t believe you haven’t had the rain.’ In nearby Prestbury village, it can pour down and the course will completely miss it. The course tends to have less rainfall than the surrounding area.

“What tends to happen, with the rain coming predominantly from a southwesterly direction, is that it can split as it comes up the Bristol Channel, and we’re in line with the Bristol Channel.” Hence the precipitation goes around, rather than over, the racecourse.

“I can only think of three occasions in 15 years when we’ve had significant unforecast rainfall, but there’d be hundreds of occasions when I’ve become frustrated because we haven’t had anything like what was forecast.”

Cheltenham town can often be warmer than its surrounding area. Until 2003, it owned the record for the highest temperature ever recorded in Britain.

The course is situated so that on a clear day the track will be in full sun for the entire day, and due to the topography, there is usually also a steady wind.

The course’s advisor on meteorological matters is John Kettley, famous for being the subject of a 1988 song “John Kettley is a Weatherman” by the band A Tribe of Toffs. The former UK Met Office and BBC television weather presenter has been providing the forecasts for Cheltenham for 14 years. “He’s learned to have an appreciation for what is unique about the bowl of Prestbury Park [as Cheltenham is also known],” Claisse said.

Leading up to the Festival, Claisse receives an update every other day. His main concern is of course the prospect of precipitation.