The year 1918 began on a note of optimism in American racing circles. The front page of the January 1 Daily Racing Form featured an article titled ‘Optimistic Over Racing Outlook’, though this was in reference to the war in Europe, which America had entered in April of 1917.

That New Year’s Day saw the opening day of the Fair Grounds meeting in New Orleans, and there was also racing at Oriental Park in Havana, Cuba.

Unknown to anyone at the time, a ticking time bomb was about to go off only two months later, one that would at first be serious, but later become catastrophic, and prove lethal to an estimated 50 to 100 million of the planet’s human inhabitants.

Perhaps the first hint that anything may have been amiss was a small item on the bottom of the Form’s front page on Monday, April 1, reporting that Fred Rehberger, secretary of the Queens County (New York) Jockey Club, was recovering from “a severe attack of grip” but was said to be “on the rapid road to recovery”.

On Saturday, May 4, Exterminator won the Kentucky Derby by a length over a muddy track in 2:10⅘. The gelding would earn the nickname ‘Old Bones’ and go on to become a legend of the turf.

The Preakness was run in two divisions on Wednesday, May 15, as the fourth and sixth races of a seven-race card, each worth $15,000. War Cloud won the first division by three-quarters of a length over nine others, while Jack Hare Jr took the second division, which had six runners.

The 50th running of the Belmont Stakes took place on Saturday, June 15. Only four ran the mile and three furlongs, with Johren prevailing by two lengths over War Cloud. Exterminator sat both of those races out.

When space permitted, the Form would include snippets of non-racing news. On July 16, under the heading ‘Latest Current News of the Day’, was the first mention of the virus by name: “The illness from which thousands of persons in German industrial districts are suffering and which has been described as Spanish influenza is really due to hunger and consequent exhaustion.”

In spite of its name, it is now thought the virus may have originated somewhere in the United States, as the first reported cases came in March from an army camp in Kansas.

For racing, and the world, the worst was still to come. 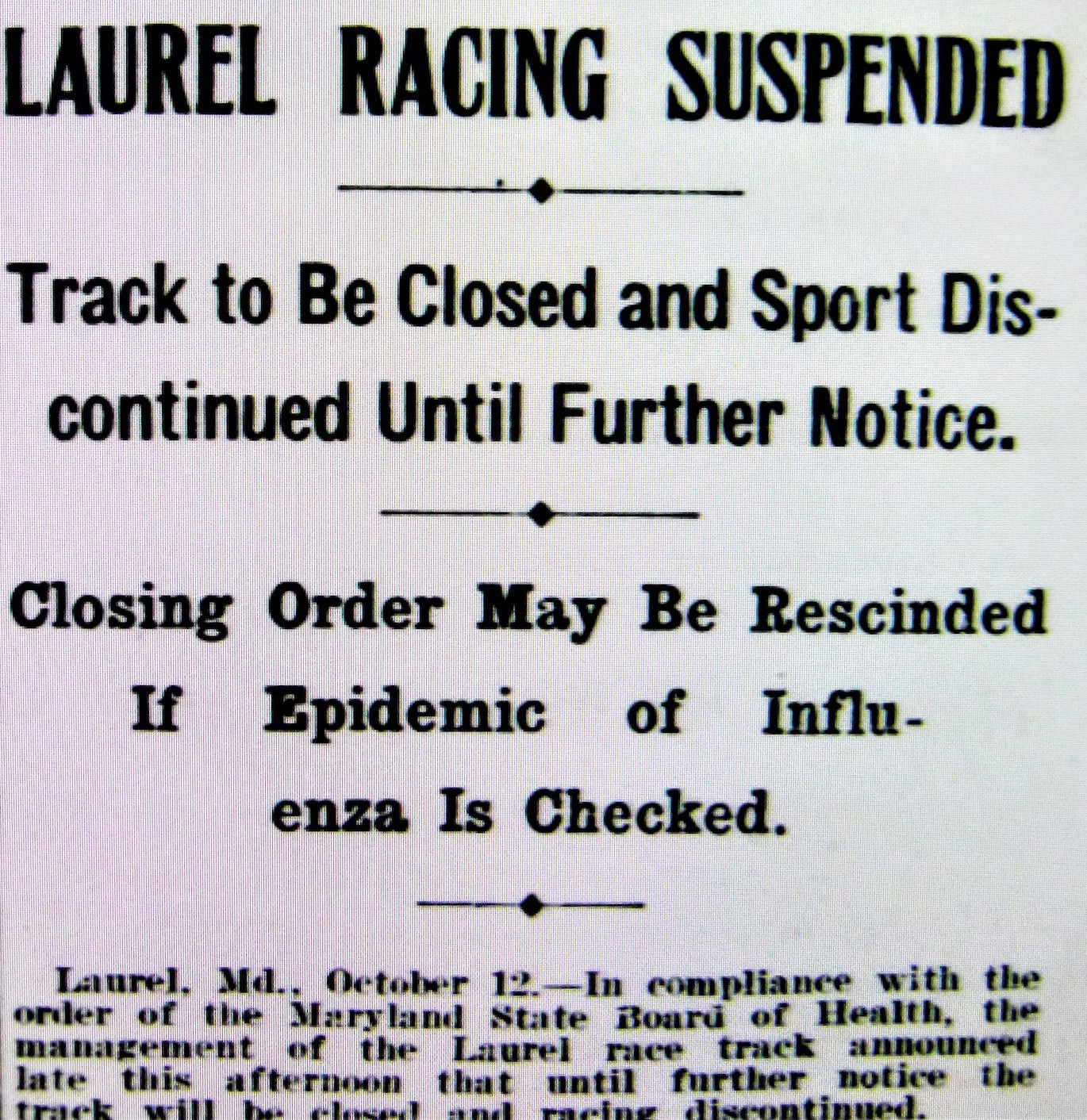 Under the heading, ‘Current Notes of the Turf’ on July 31, was word that the 2-year-old Sir Barton was “displaying wonderful speed in his work-outs at Saratoga”. There had also been much praise heaped upon a new young rider named Earl Sande, who was taking the Maryland circuit by storm.

On October 3, the Form reported that Sande had been “taken down with an attack of Spanish influenza and will not be seen in the saddle for several days”.

Front page headlines on Sunday, October 6, told of huge crows at Jamaica and Laurel the previous day. At the bottom of the same page were these few lines: “Former jockey Jack O’Brien died Wednesday in New York after being sick with influenza for a week.”

Word came two days later that Latonia in northern Kentucky may have to postpone its meeting, which was due to start on October 10, on account of the outbreak of flu in the area. The next day, it was confirmed that the 21-day meeting would be postponed a week. Even then, the threat was downplayed:

“The influenza situation is by no means serious hereabouts and the pleasant weather conditions prevailing, together with the precautionary measures so promptly resorted to when the disease made its appearance in this vicinity a few days ago, is expected to effectually check its spread.” 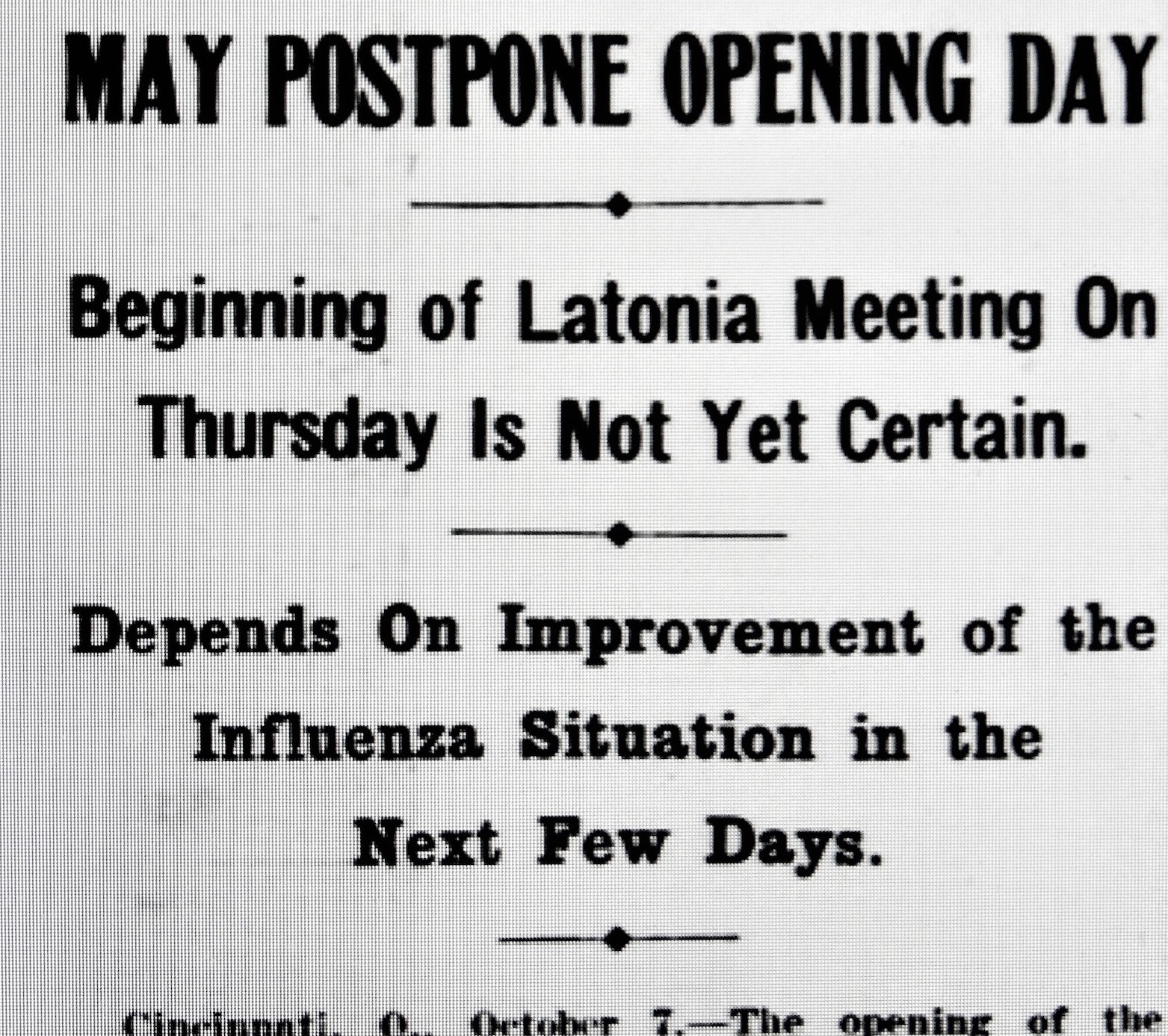 There was even a bright side: “The additional week … will simply permit the trainers of the hundreds of horses already quartered at the track to get their charges into superb condition for the deferred opening.”

On October 11, the Maryland State Board of Health issued an order closing all places of amusement, including Laurel, but later in the day rescinded the order. “No further hindrance” was expected. Due to the confusion regarding the orders, some trains heading to the track were delayed.

On October 12, an article on the previous day’s racing at Jamaica highlighted an interesting diversion for racegoers: “Between the third and fourth races, an aviator enlivened the crowd with his spectacular evolutions in the air, and, upon his alighting in the center field, was loudly cheered.”

Further on in the same article came this: “Richard C ‘Cad’ Doggett died yesterday, a victim of influenza that developed into pneumonia. Mr Doggett, as owner, trainer and spectator, has been one of the most widely known figures of the eastern turf for 20 years.”

Sunday, October 13, brought the news that racing at Laurel had been suspended until further notice.

The same day, under ‘Interesting and Pertinent Topics of the Day’ was this dispatch: “Spanish influenza is raging again in all parts of the western world, having reached South Africa, where in one town 107 deaths were reported. Cape Town is almost isolated from the rest of the world.”

On Thursday the 17th it was announced that racing at Latonia would be delayed for another week. The Kentucky State Board of Health, while “convinced that the situation was well under control, felt the time had not yet arrived when it could modify its order prohibiting public gatherings”.

It was noted the same day that at a harness meeting in Atlanta, Georgia, every person entering the track was required by the board of health to wear a mask.

The Latonia meeting was again postponed on the 22nd with no date given as to when it would take place.

Laurel resumed racing on Saturday, October 26, while horsemen at Latonia were “pursuing a policy of watchful waiting”. Laurel carded eight races that day. Exterminator won the sixth, the Ellicott City Handicap at nine furlongs over four others.

It is nothing short of astounding that racing carried on in the major metropolitan area of New York. The city recorded over 20,000 deaths due to the outbreak.

The War to End All Wars finally reached its conclusion on November 11. Crowds gathered to celebrate the Armistice, inevitably leading to more cases.

The day brought out an “immense” crowd to Pimlico, which had begun its meeting on November 1. Prior to racing, a “monster” parade was held on the track, consisting of a band, Maryland Jockey Club directors, flag bearers, soldiers and sailors, track officials, jockeys’ valets, owners and trainers, mutuel employees and the public.

Latonia finally opened with a seven-race card on Wednesday, November 13. Though there were plans to conclude the meeting on November 30 (Kentucky State Racing Commission rules stated no racing could take place after December 1 and before April 1) the abbreviated meeting finished on Thanksgiving Day, Thursday November 28.

On the 24th Exterminator won the 2¼ mile Latonia Cup by a nose. Four days later, he won the 8½-furlong Thanksgiving Handicap by 2½ lengths.

This news item appeared in the Form on December 5: “The ‘flu’ is coming back to Chicago. It may lurk about for years or disappear at any time. In the meantime, the public must exercise extreme care and continue preventive precautions.”

And there were these strong words on the 19th: “The medical correspondent of The Times (London) wrote, ‘There seems to be reasonable grounds to believe that six million persons have died of flu and of pneumonia in the last 12 weeks. This plague, therefore, is five times more deadly than the war, which has been estimated to have killed 20 million persons in four and a half years’.”

There was no let up in cases with the arrival of the new year. Several owners and trainers at the Fair Grounds were reported to be “down with the flu but most of them are now on their way to recovery”.  Later in January, four employees at the Jockey Club’s head office in New York were off work with the flu, and “the wheels of the organization are practically at a standstill for the time being”.

On January 10, the Form printed a list of racing personalities who had died the previous year. The war and influenza were the main causes. In February, it was revealed that 86 American jockeys had served in the war. Four were killed in action. The January list named five who were felled by flu.

The virus spared some. In February, trainer James Rowe, Sr was reported to be recovering from the flu. In all, he trained two Kentucky Derby winners, one Preakness winner, and the winners of eight Belmonts. He also trained the undefeated Colin.

Earl Sande recovered from his bout with the flu and went on to win the Kentucky Derby three times, the Preakness once, and the Belmont five times, including the 1930 Triple Crown aboard Gallant Fox.

Also in February, leading jockey Frank Robinson, who had ridden Johren to victory in the previous year’s Belmont, “successfully weathered” an attack of flu picked up while riding in New Orleans. Later that month he was married. On April 4, he was killed in a fall during a race at Bowie. He was four days short of his 21st birthday.

The crisis was pretty much over by Wednesday, June 11, when Sir Barton, in the words of the Form, “added another jewel to his crown” when he captured the Belmont Stakes, adding to his victories in the May 10 Kentucky Derby, the Preakness four days later, and then the Withers in between for good measure.