Bearing in mind 2018 is far from over, world #1 trainer Aidan O’Brien’s statistics, broken down by year, make very interesting reading: 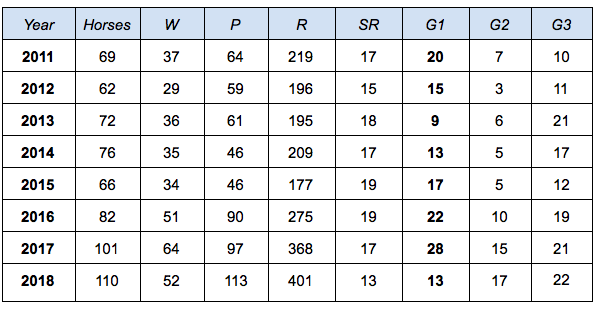 Judged by the number of Group 1 wins so far (13) compared with the last two seasons (22, 28), many have O’Brien’s campaign down as slightly disappointing. Fair enough, by this metric, but his total of 52 Group wins so far is already his second-highest total in the sample, behind only 64 in 2018, which he may edge closer towards in the remaining two months.

But the number in the table that should strike fear into the hearts of his opponents, the number that absolutely demands the closest attention possible, is not in the ‘W’ column or the ‘G1’ column, but the ‘Horses’ one.

O’Brien has already achieved a personal best in the number of individual horses he has run in Group races; he has already posted by far the most placed horses ‘P’, yet his Strike Rate (SR) is the lowest in the sample. This is really notable.

The principle of regression to the mean (outlying metrics in small samples tend towards longer-term values) suggests that O’Brien will not have a SR as low as 13 percent in 2019. And, the underlying numbers support the notion there is a growing size and strength to the Ballydoyle army that will unleash an even more potent threat in 2019.

Here are five representatives – of the countless who could have been chosen – who key the potential for a hugely successful charge from Tipperary next year.

Undoubtedly the greatest sire of the last 20 years has had a down year in Group races in 2018. Here are his numbers: 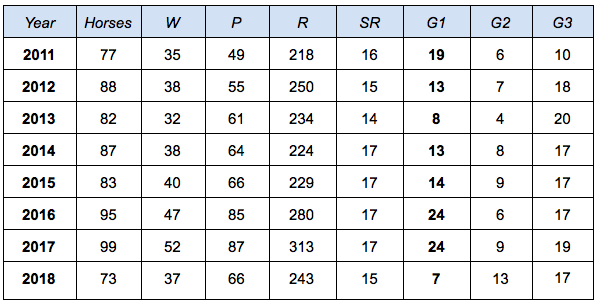 Unthinkably before the campaign, Galileo has even lost his #1 spot in TRC Global Rankings - to Dubawi.

Given the results, only a desperately poor or delusional rankings system would fail to recognise this. By nearly every objective measure, Dubawi’s numbers are simply better at the margin than Galileo’s (very basically, his ‘slash-line’ of G1/G2/G3 is 9/14/14 compared to 7/13/17) so far this year.

The Official World Golf Rankings don’t still have Tiger Woods at #1 just because he is the greatest golfer of the last 20 years! A driving feature of rankings is that they must be time-weighted because recent events are more reliable than older ones.

Our rankings believe that a year is long enough to weight probabilities towards competitor A over competitor B when the results of A are better than B. Otherwise, in general we would more often be stuck in the past, failing to update our understanding in the light of new evidence.

However, the situation between Galileo and Dubawi is different from that between Tiger Woods and Dustin Johnson, for example, in golf. We know more about the situation and, while Galileo has had a down year by his standards, Dubawi has had a vintage one by his.

Rankings do not purport to know as many variables as human experts; they should aggregate objective information efficiently and unbiasedly using carefully laid-out principles of computation – which is exactly what TRC Global Rankings do, if you read the documentation here.

Still, it is way, way too soon to be suggesting that Dubawi is #1 to stay, even though he is the sire of the two most brilliant juveniles to run in Britain and Ireland so far in 2018: Too Darn Hot and Quorto.

The bottom line is that Galileo should make an even greater contribution to O’Brien’s numbers (and vice versa) in 2019 than this year.

Of course, there are plenty more fish in the Ballydoyle pond than Magna Grecia. But this colt could prove a totem for what is to follow when he lines up in the G1 Vertem Futurity at Doncaster on Saturday (in the race formerly known as the Racing Post Trophy). O’Brien is simply unparalleled at improving horses on the track, and Magna Grecia has already shown he is very good in two just two starts.

The son of Invincible Spirit gave Kingman’s imposing son Persian King a huge fright in the G3 Autumn Stakes last time. Expect him and O'Brien’s G2 Beresford winner Japan – a son of the mighty Galileo – to be leading lights in the 2019 classic campaign. Japan has been mentioned in dispatches from all over the racing world of late. He has to be good.

It is interesting that several O’Brien-trained horses have been bidding, in effect, to be the stable’s #1 older stayer in 2019, a role only recently left vacant by the retirement of the wonderful Order Of St George, a former Ascot Gold Cup winner.

Entering last Saturday’s G2 Long Distance Cup at Ascot, that horse looked sure to be Flag Of Honour, all-the-way winner of the G1 Irish St Leger, which his illustrious predecessor won twice.

However, the situation is now more in flux. Flag Of Honour retreated quietly in the straight, finishing behind stablemate Sir Erec, who ran third to Stradivarius. The latter is a promising horse in his own right with a part to play in 2019 himself, but Flag Of Honour now needs to bounce back.

Assuming the dual G1 winner Kew Gardens is returned to a mile and a half after his triumph in the 14f+ G1 St Leger at Doncaster, the horse to keep an eye on is Capri, winner of that same classic in 2017.

Capri, a grey son of Galileo, hasn’t had a smooth run at his campaign this year. But he still managed to run fifth in the G1 Prix de l’Arc de Triomphe – albeit from a favourable, prominent position early. His form the previous year stands up to the closest inspection – particularly that defeat of Crystal Ocean and Stradivarius in the Leger – and he could be a better, stronger, smoother-running Capri with a Ballydoyle refurb job over the winter.

It was the rock band Simple Minds, not the Russian composer Sergei Prokofiev, who we associate with Don’t You (Forget About Me). But, this could prove a useful motif for the colt named after the latter who was so highly thought of in the first part of 2018.

The son of Scat Daddy ran third to Calyx and Advertise in one of the strongest renewals of the G2 Coventry Stakes at Royal Ascot one could wish to see.

After that, he put shocking and surprising ‘0’s into the formbook while thrashed in the G1 Phoenix Stakes (by Advertise) and G1 Middle Park Stakes (by gaudy stablemate Ten Sovereigns). One more ‘0’ and Sergei Prokofiev the horse would recapitulate his namesake’s The Love For Three Oranges.

Then, the G3 Cornwallis Stakes happened. This was a breakthrough work for Sergei, worth miles more than the length and a quarter he had to spare over Well Done Fox. The striking bay came round the field and quickened like a mustang to take command: the real Sergei Prokofiev had returned like The Prodigal Son.

Though the Cornwallis was run over five, a return to further will suit this massively talented colt, who could redeem his once huge reputation under the brilliant direction of O’Brien.

Oh, and there is also Ten Sovereigns. He can run too.

The fillies Magical and Happily experienced contrasting fortunes on British Champions Day at Ascot. If kept in training as 4-year-olds, these two daughters of Galileo whose careers were once intertwined could do some serious damage in 2019.

Magical was having only her second start at a mile and a half when successful in a strong renewals of the G1 British Champions Fillies & Mares Stakes, (becoming Galileo’s 74th individual G1 winner). Off two months after winning the G2 Kilboy Estate at The Curragh in July, she might have been one of those O’Brien horses whose campaign was punctuated by concerns about health issues in the yard around her.

Either way, she has unrealised potential over a distance of ground, signalled first by her excellent tenth in the Arc, in which she tried to run the race similarly to the runner-up, Sea Of Class.

As a juvenile, Magical beat fellow Ballydoyle inmate Happily in the G2 Debutante Stakes, then was beaten a short head by her in the G1 Moyglare Stud Stakes. Both of these races were at the Curragh.

Happily gave the lie to her name temporarily when withdrawn before the start of the G1 Queen Elizabeth II Stakes at Ascot, in which stablemate I Can Fly was beaten a neck by Roaring Lion. Happily is good enough to have beaten them both on the day.