Holy Helena heads a competitive 62nd edition of the $500,000 Woodbine Oaks, presented by Budweiser, on Sunday at Woodbine. The fillies’ classic, which attracted 12 Canadian-foaled 3-year-old fillies carrying 121 pounds over one mile and one-eighth on the Tapeta, will go postward at 5:29 p.m local time. The winner receives $300,000.

In addition, the $150,000 Plate Trial (at 4:24 p.m.), also at a mile and an eighth on Tapeta, features the top three Queen’s Plate winterbook choices Tiz A Slam, King And His Court and State Of Honor.  The Queen’s Plate, Canada’s most famous horse race, is scheduled for Sunday, July 2.

Holy Helena, a Stronach Stables homebred daughter of Ghostzapper trained by James Jerkens, is lightly raced but boasts a field-best 86 Beyer Speed Figure from her impressive maiden score on May 12 at Belmont Park. Sent to post at odds of 8-1 that day, she battled on the lead in the 8½ furlong main track maiden allowance and prevailed by three-quarters of a length in a determined effort.

“I was kind of worried. I didn’t think I had enough time to prepare her for it,” said Jerkens of the maiden score. “I never worked her a long distance but I put a couple of shorter works close together and sometimes that’s good. She was relentless that day. She was resolute, kept coming and showed gameness. That’s a big part of the battle with horses is having them show the desire.”

On Sunday, Holy Helena will stretch out to nine furlongs while making her third career start. Jerkens is confident the dark bay filly will appreciate the added ground.

“I think so. It’s only her third start but she acts like it,” said Jerkens. “She has a half-brother [Holy Boss] who is a nice horse, but he’s a sprinter by Street Boss and most of them are sprinters. It looks like the mare is a nice mare and anything that comes out of her will be able to run to some degree. 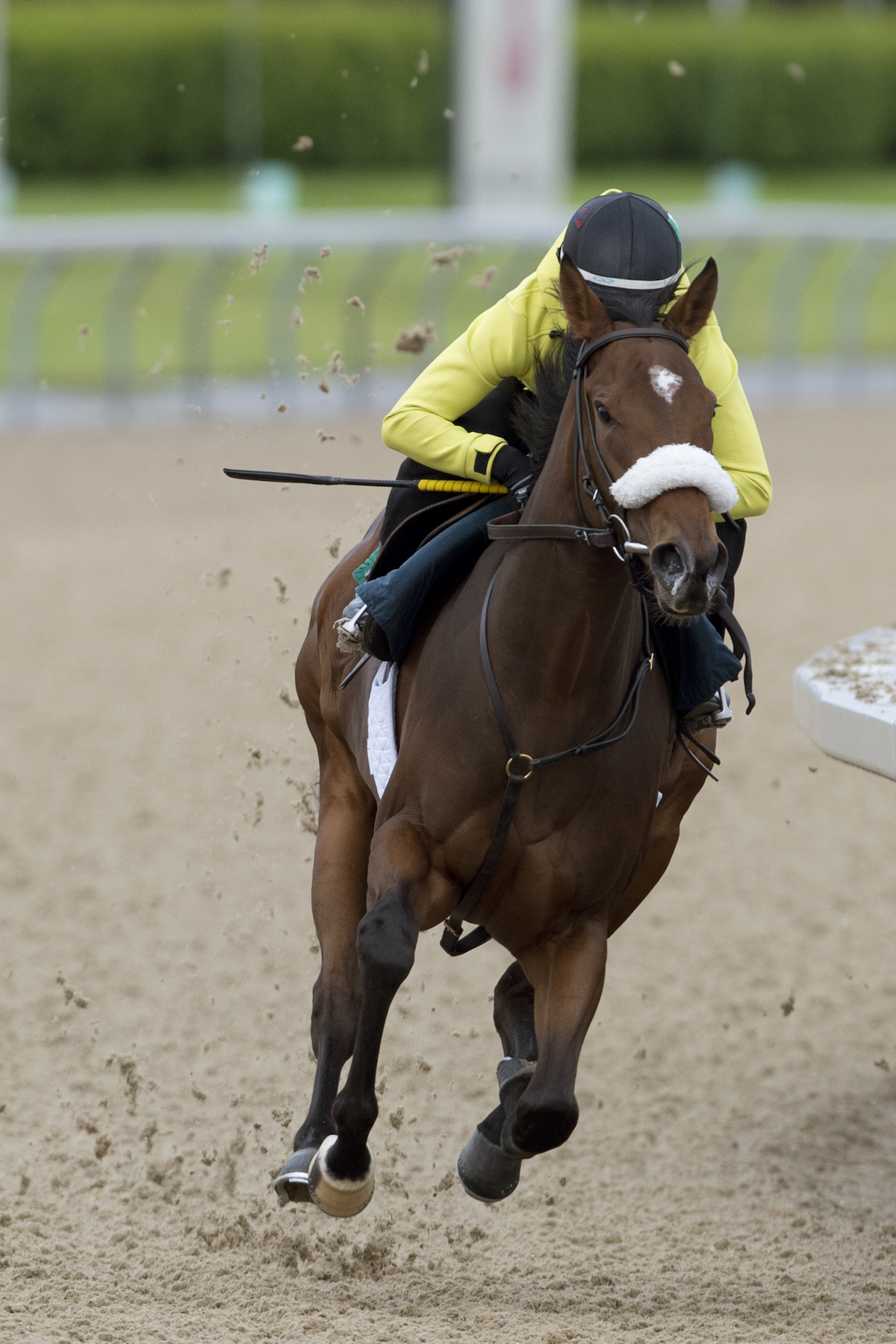 “She [Holy Helena] is built long and has nice scope to her,” continued Jerkens. “Ghostzapper stock can certainly go the distance. And the first two starts suggest that will be her forte. This is in the natural progression, I think. It’s probably not as a big a jump as it looks.”

Holy Helena shipped into Woodbine earlier in the week to the barn of trainer Mike Doyle, who is racing manager for Stronach Stables. The filly breezed five furlongs, with jockey Luis Contreras up, on June 6 in a quick 1:00.80 in her final prep for the Oaks.

“I talk to Mike every day and he says she’s really taken to it. The jock worked her and he said she handled it fine. It’s a big help,” said Jerkens.

Holy Helena trained at Woodbine briefly last season but never raced.  On Sunday, she will look to make her Canadian debut a winning one. “She drew a nice post. I’ve looked at the past performances and it’s tough enough, but she looks like she’s improving quickly and with all that money hanging up there it’s worth a shot,” said Jerkens.

Fellow U.S.-based contenders Stallion Heiress and Inflexibility are expected to take a lot of interest on the tote board.

Stallion Heiress, trained by Michael Stidham for Stallionaire Enterprises, went undefeated in three starts at the Fair Grounds, taking the both the Broussard Memorial and LaCombe Memorial in gate-to-wire fashion. Last time out, in the G3 Edgewood at Churchill Downs, Stallion Heiress set a swift early tempo before fading to tenth. Florent Geroux will ride.

Inflexibility, a bay daughter of Scat Daddy trained by Chad Brown, has raced just twice but arrives at the Oaks from a visually impressive score in a 1 1/16-mile maiden turf allowance at Belmont Park. Joel Rosario, aboard for the maiden win, ships in to ride.

Enstone, trained by Mark Casse for East West Stables, is the most accomplished of the locally-based Oaks fillies with a record of two wins and four seconds from eight starts, including a victory in the seven-furlong Fury Stakes.

Last time out, in the 1 1/16-mile G3 Selene Stakes, Enstone raced on the engine and was only collared in the final stride by the well-regarded Irish-bred Grizzel. Patrick Husbands retains the mount.

“I thought she ran great but she just got beat by a better horse that day. She had a good ride and there were no excuses. I thought she ran very well,” said Kathryn Sullivan, assistant trainer for Casse.

Tiz A Slam, the Queen's Plate winterbook favourite, will tackle a tough trio of Casse starters in the $150,000 Plate Trial. The Tiznow bay will leave from the inside post in a field of six going 1⅛ miles over the Woodbine main. Eurico Rosa da Silva will ride for Hall of Fame trainer Roger Attfield, who is seeking a record ninth Queen’s Plate score.

Attfield believes the nine furlongs is within range for Tiz A Slam. “I think a mile and an eighth will be, whether a mile and a quarter is, I don’t know. There’s a bit of a question mark in my mind, but that’s what the Trial is all about,” said Attfield. “I actually wanted to run him a bit this winter, but he went through a bit of a growing stage and he was a big colt in the first place. So, I didn’t get that achieved. But right now we’re on target for the Trial.”

To win the Plate Trial, Tiz A Slam will have to best a talented but compact field that includes the Casse trio of King And His Court, State Of Honor and Expedition.

King And His Court boasts a record of four wins and four thirds from 12 career starts and is the most experienced horse in the field.  Outside of a pair of off-the-board efforts in the United States over the winter, King And His Court has been ultra-consistent and arrives at the Plate Trial from a dominant score in the Wando Stakes. Gary Boulanger will ride.

A relationship that clicks

“He’s been training great and Gary, who knows him so well, is so pleased with him. He just loves it at Woodbine,” said Sullivan.

Boulanger has partnered King And His Court three times at Woodbine, winning the Coronation Futurity and Display Stakes as a juvenile, in addition to the Wando win.

“Gary is a very patient, quiet rider and sometimes a horse and rider just have that relationship that clicks,” said Sullivan. “Gary is very confident in him and that’s also a big factor.”

State Of Honor owns the opposite form of his stablemate. The To Honor And Serve bay has been okay at home but brilliant on the road, finishing second in both the G2 Tampa Bay Derby and G1 Florida Derby, earning a start in the Kentucky Derby, where he finished 19th after setting the early pace.

His lone score came in a seven-furlong maiden event on the Woodbine Tapeta.

“He's a lovely horse. He ran well on the Tapeta as a 2-year-old, but he really blossomed when he got on the dirt this winter in Florida,” said Sullivan. “He's been training very well and we couldn’t ask him to be doing any better. There’s that little question mark [of Tapeta], but the Trial will answer that question.”

Expedition, a dark bay son of Pioneerof The Nile, raced three times at Gulfstream Park for trainer Todd Pletcher without hitting the board.  After being transferred to the Casse outfit and shipping north to Woodbine, Expedition has raced twice, finishing eighth on April 28 before graduating in a driving finish last time out in a 1 1/16-maiden allowance.

“We haven’t had him that long and his first race at Woodbine wasn’t as impressive as we had hoped. He had been training well, but showed nothing. And then he came back next time out and ran a great race and won very nicely. Hopefully he’s turned around now and things will keep going that way,” said Sullivan.

G1 winner on the undercard

Also featured on the undercard is the $100,000 Alywow Stakes, a 6½-furlong turf sprint for sophomore fillies, headlined by last year’s G1 Natalma Stakes champ Victory To Victory. The Alywow will go as Race 4 (4.26 p.m.) on the E.P. Taylor Turf Course.