In the last of the present series taking a look at the results of the first ten years covered by TRC Global Rankings, it is with no hesitation that we are delighted to name GALILEO as the greatest sire of the epoch – and of many others, probably.

This, of course, is hardly a controversial choice and simply ties TRC Global Rankings in with conventional thinking among bloodstock experts.

Here are the aggregated results from races that have counted towards our rankings over the last decade. The top 30 stallions by wins are shown. Think of this as the raw materials of the rankings, before refinement: 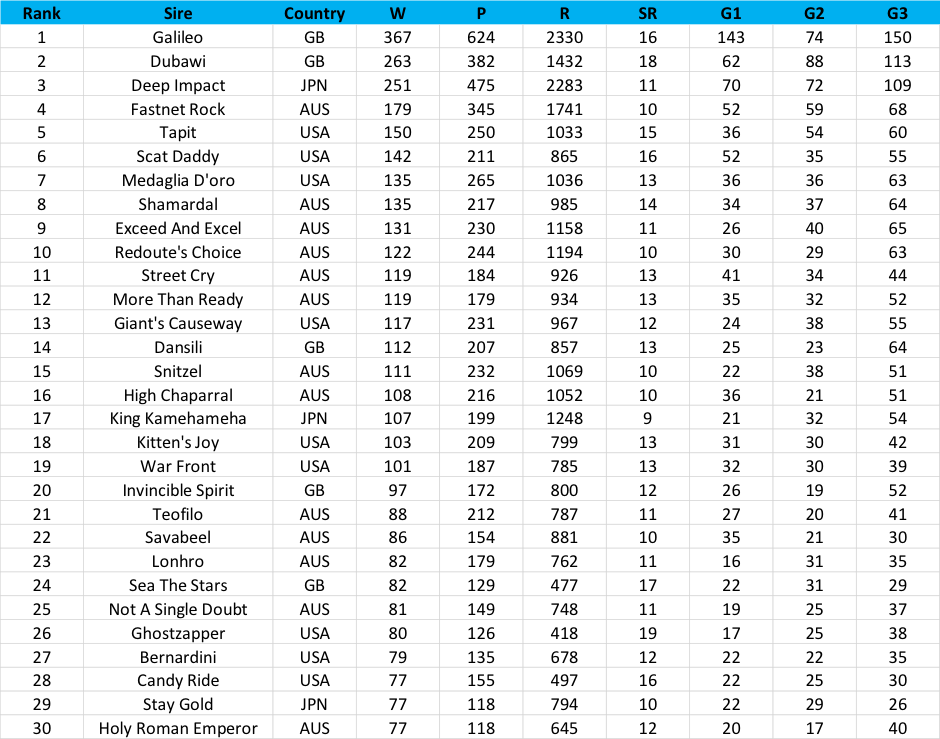 And here is how we have distilled the data to produce the rankings during our first decade: 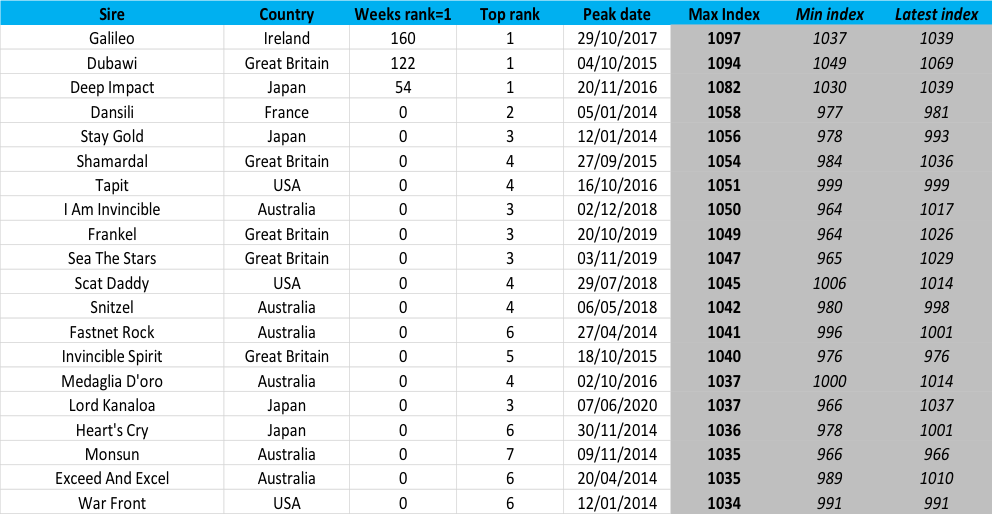 In terms of maximum Performance Index, it is actually close between the Coolmore leviathan and his Darley counterpart Dubawi (who is our current #1) but it isn’t that close in terms of legacy, for Galileo has topped the TRC charts for a stunning 160 weeks, compared to 122 for Dubawi. The only other sire we have rated world #1 is Japanese legend Deep Impact.

Galileo and Dubawi’s basic win-loss numbers (rest assured, TRC Global Rankings is a lot more sophisticated than just this) in all global Group and Graded races since 2011 by year are as follows:

Now, our savviest, most open-minded readers should be able to spot a pattern here: the figures in the blue are trending in one direction and the figures in red in the other. In the top three rows, for example, it can be seen that Galileo has had 81 global winners while Dubawi had had 84. And Dubawi’s strike rate is nearly ten points higher – a gigantic margin.

Does strike rate really matter? Well, it depends on the context. If you are a bloodstock expert, you might very well compare the two stallions in a stationary fashion by simply adding up their career wins – regardless of context and what has happened recently.

Using this measure, there is no doubt whatsoever that Galileo is far ahead of Dubawi. So, you might choose to stop there are pronounce something like “Galileo is a greater sire than Dubawi” in some scholarly fashion. We would not disagree, for what this is worth.

As we have written here numerous times before, Galileo’s legacy is far in excess of Dubawi’s already and he certainly hasn’t finished producing good winners by a long chalk. Only last Sunday he was responsible his fourth Newmarket 1000 Guineas winner in five years when Love powered home by 4¼ lengths. She is now a strong favourite for the Epsom Oaks.

But rankings are our business. And rankings are dynamic. They do not purport to measure greatness and they should never be used to infer that competitor A is ‘better’ than competitor B.

No, what rankings should do is:

Our criteria are laid out here and in depth here, we use prediction accuracy in future races as our metric (technically, our coefficients attempt to maximise the log likelihood of the probability we assign each future race, a standard concept in statistics) and the changes to our rankings reflect how the rankings have “learned” (without overfitting recent results) from what has just happened.

All our methodology is constantly reviewed, refined and, where possible, improved on a continual basis, not just because it is our job but because it is fun and stimulating and a unique challenge.

As stated clearly above, TRC Global Rankings has had Galileo ranked above Dubawi for nearly a full year longer. But, for the moment, that isn’t the case and Dubawi is ranked higher. Here are our most recent rankings:

And here are the latest Official World Golf Rankings (OWGR) which haven’t been updated for a while owing to the pandemic: 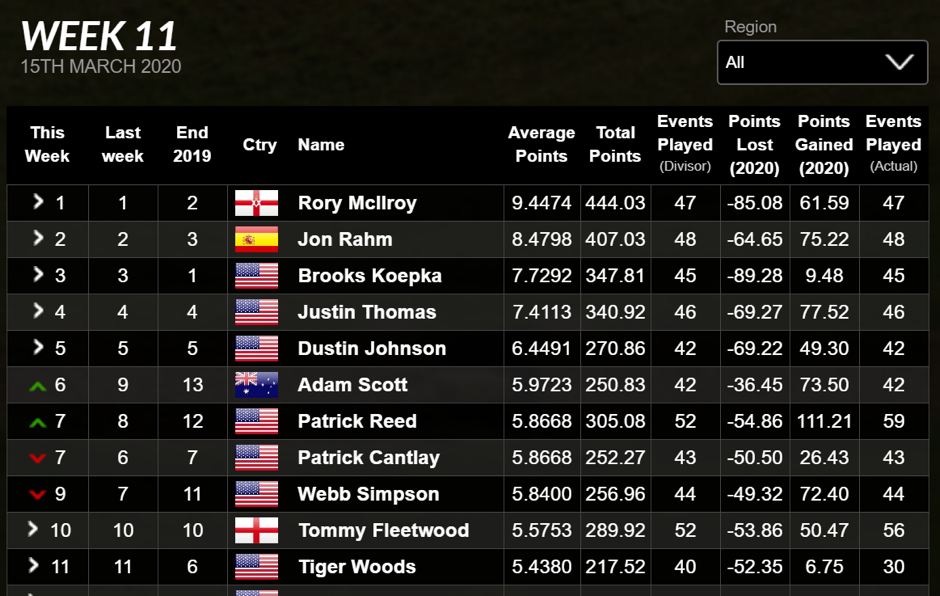 Tiger Woods ranked #11??? Isn’t he the greatest player of all time??? How can ten players be ranked above him??? Do they think Tommy Fleetwood is better than Tiger Woods??? Woods has won 110 professional tournaments, five Masters, four PGAs, three U.S. Opens and three (British) Opens; these golf rankings lost credibility when Tommy Fleetwood went ahead of Tiger Woods!

Hopefully, for their own sanity, the compilers of the OWGR don’t have to face these kind of questions on a regular basis. You can bet that, apart from the odd Jack Nicklaus fan, every person who works for their organisation agrees that Tiger Woods is the greatest golfer of all time.

Everyone surely knows why these golf rankings stand as they do. Rory McIlroy, for instance, is ranked above Woods because, on recent form, he finishes in front of him more often than not.

Extending the McIlroy – Woods comparison to Dubawi – Galileo, there is an important consideration to be made when ranking stallions: while golfers have one tournament ticket each, sires often have different number of runners. Because we are dealing with Group and Graded races when making TRC Global Rankings, it actually reflects well on a stallion that he has a lot of runners in Group races, irrespective of their performance. And this is very much a staple of our rankings too.

But, when the sample size gets large enough, it becomes the right thing to do to rank one stallion ahead of another, if, as in the case of McIlroy and Woods, one of lesser historical achievement overall keeps beating their notional superior. Just as the OWGR are not saying that Tommy Fleetwood is ‘better’ or ‘greater’ than Woods, TRC Global Rankings makes no statement about the relative merits of Dubawi and Galileo.

These Head-To-Head (H2H) comparisons – weighted according to how well they predict future meetings between competitors – is simply the best way that we have found to predict the future.

Since January 1, 2018, Dubawi leads Galileo 102 to 62 in H2H meetings. That’s a wide margin. Some people come up with reasons why that is not important. “Aren’t some of those Galileos just pacemakers?“  they say. “Isn’t Dubawi’s record flattered by results in Dubai?”

Well, yes some are. But, you can look at the data in another way. In more than two full years of results, there have been 74 races where there was at least one Galileo AND at least one Dubawi in the field. In those races, Galileo has had 123 runners and Dubawi only 95. Here are their finishing positions:

You can see its close enough – just like our rankings describe. But, Dubawi has had 33 runners in the first two to Galileo’s 28. That is a significant margin when you consider that Dubawi has had 23 percent fewer runners.

As for the point about Dubai flattering Dubawi, first of all these are global rankings, not European ones, and it is easy to argue that Irish racing offers only the same challenge for Galileo.

Remember, these are RANKINGS we are doing here. We are not attempting to describe the legacy of the two stallions, any more than the OWGR is trying to claim Tommy Fleetwood owns more ‘greatness’ than Tiger Woods.

But, Dubawi’s claims don’t rest there because Dubawi is not ranked above Galileo at present entirely because of their H2H records.

Look back at Table 3, in which we compared the two by performance grouped annually. Dubawi’s strike rate is very high. This tells you he is winning H2Hs against every other stallion. And, that is really the basis of our rankings – a giant web of H2Hs linking every stallion in the world.

We use maths that is specially formulated to handle networks like this to find the influence of each stallion relative to every other one. The numbers that drop out are odds ratios, which describe the average probability that a stallion would win a H2H encounter with a randomly chosen opponent within the data. To turn these into rankings that predict future encounters the best we can, we need to control for sample size and other factors.

To finish, let’s return to the start. Based on ten years of data, WE CONSIDER GALILEO TO BE THE GREATEST SIRE OF THE EPOCH. But, remembering these are rankings that have been on the right side of recent Dubawi-Galileo meetings, we are confident that Dubawi deserves to be ranked higher at present. After all, over a rolling two-year period (since this week in 2018), no stallion on the planet has more winners and anything like the same strike rate at the same volume: 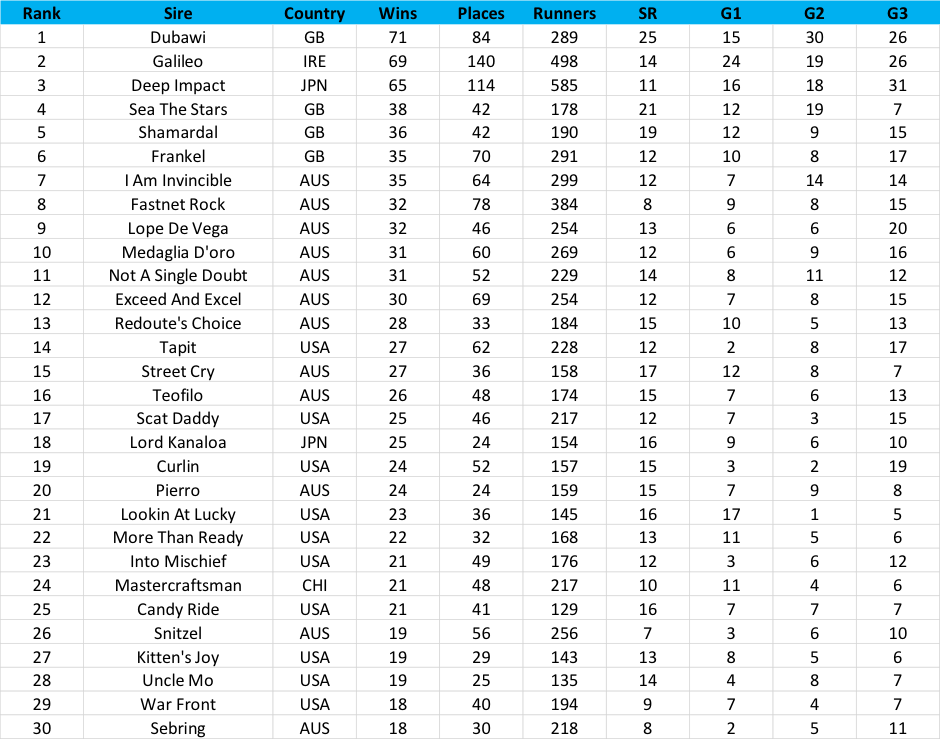