The world may have caught its first sight of a new superstar on Sunday with the dramatic last-to-first charge of Ping Hai Star to win the $2.3 million Hong Kong Derby at Sha Tin.

On the one hand, it was pretty clear before the off that the horse was one to watch. You don’t book the world’s #1 jockey, Ryan Moore, to fly halfway across the world unless there’s something fairly special waiting for him.

Ping Hai Star was coming off the back of three straight wins and, even though they were all in handicaps, the word was that this was a horse with a future - albeit with an asterisk attached. Trainer John Size had to employ all the considerable talents that have made him the #8 trainer in the TRC Global Rankings to transform in just a few short weeks a gelding renowned for over-racing and using too much energy into a bona fide classic contender.

“The lead-up was difficult and to come out the other side with the Derby is a great relief,” Size told the South China Morning Post. “There were gambles that had to be taken. The only time I seriously thought about the Derby was after his last win [on March 3]. It was still a big stretch, but it had to be done.”

Bizarrely, there had been some concern that Ping Hai Star might struggle to last the ten-furlong trip of the Hong Kong Derby - each of his 2018 victories had been over seven furlongs. Yet here is a pedigree laden with stamina - he is by 2008 Caulfield Cup runner-up Nom Du Jeu, a son of Montjeu - so his ability to prevail over shorter trips could have been viewed as a bonus.

The event was yet another example of why Moore occupies his lofty position as the world’s number one rider.

Watch the video of the race below, and admire his cool as he drops Ping Hai Star to the back of the field, at least ten lengths off the early pace, before winding him up down the outside into the stretch, taking the lead a few strides from the line.

Many experts in Hong Kong feel Ping Hai Star may be a member of a vintage crop of 4-year-olds locally, which underlines the anomaly of the Hong Kong Derby’s position outside the international Pattern.

This is the second richest Derby on turf in Thoroughbred racing. Only the Japanese version carries more prize money - as well as the Kentucky and UAE Derbys, which are both run on dirt. As the table below shows, Ping Hai Star won more for his victory on Sunday than the winners of the Epsom, Australian, Irish and French Derbys in 2017.

It’s likely, by the way, that the rating assigned to Ping Hai Star for Sunday’s victory falls some way short of doing him justice.

(Based on conversion of the winners’ earnings to U.S. dollars at current exchange rates) 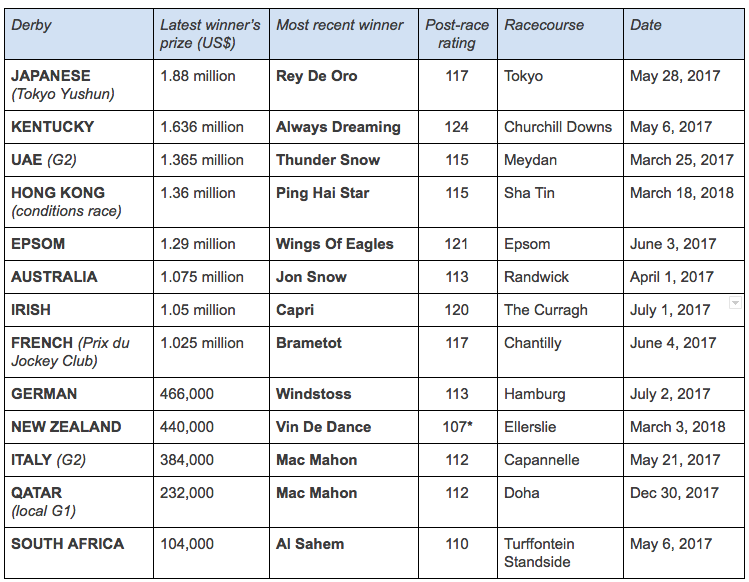 *Ratings are Racing Post Ratings, although the figure for Vin De Dance is estimated as no RPRs have been assigned from the New Zealand Derby
Just one horse won two Derbys last year. The Italian colt Mac Mahon, listed at different times as being trained by either Alduino or Stefano Botti, landed the Derby Italiano last May and was on the mark seven months later in Qatar.

The Hong Kong Derby is denied precious G1 status because it is a restricted race - no horses from outside are allowed to take part. As respected observer Michael Cox urged in the South China Morning Post last year, it’s time for the Hong Kong Jockey Club to seriously consider opening the race up so it can properly take its place as one of the world’s great contests.

That’s certainly a message we at TRC have taken on board. Until now, The Everest, the new A$10 million sprint at Randwick in October, is the only non-Group or Graded race we have upgraded internally so that it counts towards the rankings. It seemed silly not to do so. Now the Hong Kong Derby joins it. We are treating both as G1s.

Which explains why Nom Du Jeu has emerged at #340 in the TRC Global Sires’ Rankings this week. John Size gains four points week on week because of Ping Hai Star, but he remains at world #8. And suffice it to say there was no improvement in Ryan Moore’s position.