How the Breeders’ Cup is just one of many international events that benefits hugely from the work of the International Racing Bureau (IRB).

The IRB (racing version) must be one of the least familiar acronyms of any major organisation in sport. Google it, and you have to plough through a dozen or so pages of duplicated information about institutional review boards and international rugby. Mention it to an ordinary racing fan, and the likelihood is that he’ll stare in mute request for enlightenment.

The fact is, however, that every serious professional in racing knows all about the Newmarket-based International Racing Bureau. It has been and remains an indispensable organisation, which has done more than any other to promote and organise the global explosion in international competition that has taken place during the last 30 years.

Founded in the 1970s, it was the brainchild of David Hedges, a British journalist who had the foresight to spot that racing, alone of all global sports, had yet to join the rush to international competition from which others were already benefiting enormously. According to Alastair Donald, the IRB’s current managing director: “David Hedges was very prescient, but not really a businessman, and it was only after the company was bought by Mark O’Connor in 1979 and the appointment of Nick Clarke as [managing director] that the IRB really developed.”

Donald, a tall, deceptively languid Anglo-Scot who is often told that he speaks exactly like the actor Jeremy Irons - hardly surprising as they were contemporaries at the same school before one went on to Oxford and the other to Hollywood, has acquired a reputation for ubiquity as well as extraordinary stamina since he joined the company in a relatively minor role in 1984. Since then, this dedicated racing fan has arguably done more than anyone to promote the international development of the sport he loves - with the possible exception of fellow director Adrian Beaumont.

The company’s first successful collaborations were the first major international races (although the by then defunct Washington International had preceded them by more than a decade). The Arlington Million in the summer of 1981 and the Japan Cup in the autumn of the same year were the first major meetings to which they contributed in an organisational capacity.

Perception of the IRB’s value to both these launches led to its being asked to play a similar role in the first Breeders’ Cup in 1984.

“Then,” Donald said, “we had Dubai in the early 90s where we organised international jockeys’ challenges at Nad al Sheba just after the course had been built to familiarise people like Jerry Bailey and Pat Day with the conditions, and this then led up to our involvement with the first Dubai World Cup in 1996.”

Since then, every new international venture in racing has relied to a large extent on the IRB’s experience and expertise, the sole exception being last year’s The Championships in Sydney, which Donald describes as “a bit difficult because of quarantine problems and a possible conflict of interest with Dubai.”

It’s only when you list these ventures that you realise the extent to which the company is trusted. It’s a trust implied by the fact that not one of the world’s great racing meetings has ever dispensed with the IRB’s services once the co-operative partnership has been set up - unless you count an aberration in the early 2000s when a “new broom” arrived in Dubai from Australia and thought the meeting could do without the company’s services. (He was soon on his way to South America. The IRB resumed its organisational role the following year.)

Not every development is identical. Some, Singapore for example, transported a whole new racing operation from the city centre’s Bukit Timah Racecourse to Kranji near the Malaysian border in time for the inaugural Singapore Airlines International Cup in 2000.

Istanbul, which began its international racing in 1992, already had the infrastructure but needed the IRB’s experience to launch the Bosphorus Cup meeting.

The gradual development of the Hong Kong International Races to their present position as one of the biggest meetings in the world began in the early ‘90s, when, Donald recalled, “We were not allowed to recruit G1 winners to race at Sha Tin, only G2 and G3. That shows how far they’ve come in the last two decades.

“We also work very closely with Racing Victoria on races like the Caulfield Cup, the McKinnon and the Cox Plate; with Del Mar and Woodbine, and of course with NYRA (New York Racing Association) in Belmont’s introduction of the new meeting at Belmont on the July 4 weekend. Everywhere I think we have a degree of longevity with our clientele, which I hope reflects well on us and what we do.”

And what exactly is it that they do? Even long-term admirers may reasonably ask the question. The answer is anything and everything involved in the travelling of horses to compete internationally, which may be glib, but it’s also accurate.

“Well,” said Donald (who is universally nicknamed “The Duck”), “first I should mention the core activity of the company, which is the Trainers’ Service Department, run by another of our directors, James Fry, which makes all arrangements for British and Irish trainers who want to run horses overseas, from informing them through our website, and often by phone, of closing dates, to the moment the horse returns to its stable at home.

“Connections of around 85 percent of all horses travelling from Britain and Ireland use the IRB in this way,” he continued. “But what we do at all the race meetings we’re involved in is liaise too with the organisers on every issue relating to travelling a horse: from vets, to bedding for the horses, from cars to and from the airport for owners, to information for trainers on everything they need to know about conditions for preparing their horse. The idea is to take the worry and uncertainty out of overseas competition. If we had such a thing as a mission statement I suppose it would be ‘Taking the mystery out of the experience of racing overseas.’

“Wherever we go, there is always an IRB person on the ground to deal with any problem that might crop up. And, of course, we help with recruiting horses for international races. That’s a very enjoyable part of the job, but it really is quite difficult for administrators to recruit runners from outside their home country.”

The same applies to horses travelling into Britain to race. “We also work closely with Nick Smith in his mission to internationalise Royal Ascot and British Champions Day - and also with York and Newmarket.” 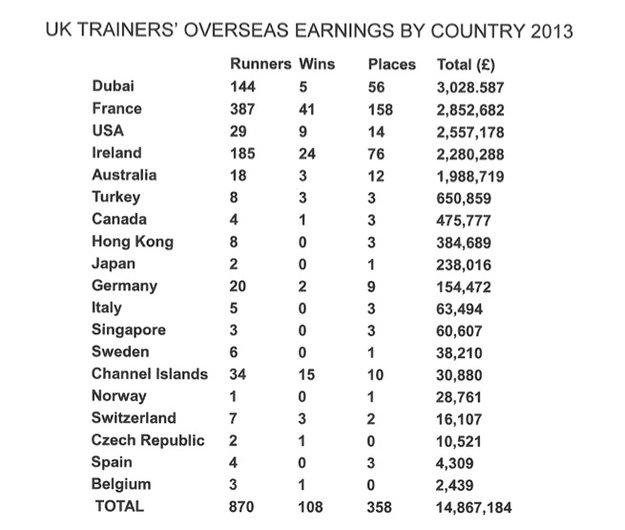 Concerning the decline in horses traveling to the U.S. in 2013, it should be noted that the IRB was not working with Woodbine or with NYRA last year, which reduced their numbers by about 10 in each location, and Santa Anita's reversion to dirt from synthetic reduced European demand for that course by approximately 10.

Donald also is keen too to emphasise that the IRB is a team that’s been together many years, with all that implies about experience and reliability. Desmond Stoneham, who has been running the IRB Paris office since the company’s opening day, remains the doyen; but Adrian Beaumont has more than 30 years’ experience around the world, and Jane George, who handles Japan, has been doing so for a couple of decades.

The IRB has partnered with the Breeders’ Cup to facilitate international competition at North America’s year end championship event for the past 30 years. Would that be one of his more demanding events?

“I wouldn’t like to say that because it might imply that some of the others are less demanding,” Donald said. “But it’s a pretty full on week alright. We’re out there every day from crack of dawn to evening stables and there are constant requests, as well as a fair bit of media work to be done. I’d say they’re all demanding. But the Breeders’ Cup is a pretty full one.”

In 2012, Donald led a management buyout that meant the company is now owned by the people who work for it, some of whom, like him, have been with the IRB for more than three decades.

“The best thing about buying the company is that it’s put the people who work for it back in the driving seat,” Donald said. “Most of us have been together for quite a long time and the fact that we’re all longtime friends and all know each other’s fields of expertise just increases the fun of the job.”

And does he have a favourite meeting? Deftly he avoids what could be considered another invidious question.

“I often get asked that, and I find it a difficult one to answer,” he said. “I’d honestly have to say it would be any race meeting in which the horses whose trips we’ve helped arrange come back having covered themselves in glory.

“You go home with a great sense of satisfaction after that. As far as the Breeders’ Cup’s concerned, it was pretty tough in the early days when nobody was quite sure of the best way of getting horses ready to race thousands of miles from home, and all too often we came home with our tails between our legs. But nowadays, things are very different. I love that moment when you come back to the stable and see those fantastic floral collars adorning the winner’s box. I know they don’t last long because they’re real flowers, but they really are works of art. Yes, a few of those for the Euros to look at in the evenings next month will be very satisfying indeed.”