James Willoughby picks out his TRC Global Rankings Performers of the Week from the Group and Graded results in the week that ended on Sunday.

This could have gone to Dubawi (+3pts, stays #1) – another three wins means that, over the last 365 days, he leads the world by five with 45 wins at a 25 percent strike rate. Instead, let’s give a nod to a sire who leads the word on our figures based solely on dirt races, CANDY RIDE (+3pts, #10 from #12), responsible for G3 winners on dirt at Oaklawn Park and Aqueduct.

We are not yet ready to publish separate rankings of sires for dirt and turf – it is important to test the performance of the rankings out of sample thoroughly – but we have produced these numbers for a while now. Here are this week’s top ten rankings solely based on dirt racing:

Candy Ride actually has his biggest lead over Curlin, having taken the #1 slot only recently. As previously explained, we don’t rate stallions who had had all their success on dirt as high as those on turf currently, simply because they are not as far ahead of the sub-population mean. There is no reason whatsoever that a dirt stallion cannot ascend to #1 overall, and it will be interesting to see how fast U.S. Triple Crown winner American Pharoah climbs the charts after his first runners begin to appear this year.

Blake Shinn (+8pts, #34 from #38) notched a perfect hat-trick – a G1, G2 and G3 at Randwick – yet still doesn’t win. This is because OPIE BOSSON (+12pts, #43 from #63) landed a G1 double at Ellerslie, New Zealand – the Sistema Stakes on Yourdeel and the Bonecrusher New Zealand Stakes on the talented mare Melody Belle.

The 38-year-old South Auckland rider established a new mark for career G1 wins by a Kiwi rider with 63 aboard Melody Belle who was winning her fifth G1 of the season. She will be reportedly aimed at the Cox Plate next season. 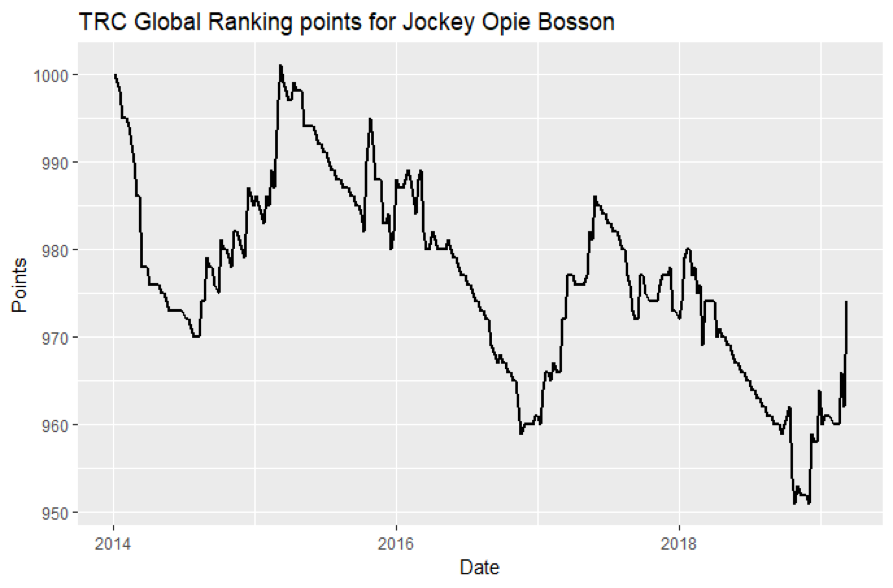 Godolphin (+2pts, stays #1) continue on a ridiculous run; Sheikh Mohammed’s operation added another six wins and has an amazing 26 on the year already at a 22percent strike rate. We will keep this in the family as HAMDAN AL MAKTOUM (+3pts, stays #3) was the only other owner with more than one win – the G3 Burj Nahar at Meydan and the G3 Gotham Stakes at Aqueduct.

Sheikh Hamdan is an owner of longstanding impact, but his fortunes on the track had fluctuated somewhat over the period during which TRC Global Rankings has operated. As the graph indicates, the maximum value of his performance index is 1053pts in the week of July 10, 2016; this week, he has 1048pts. 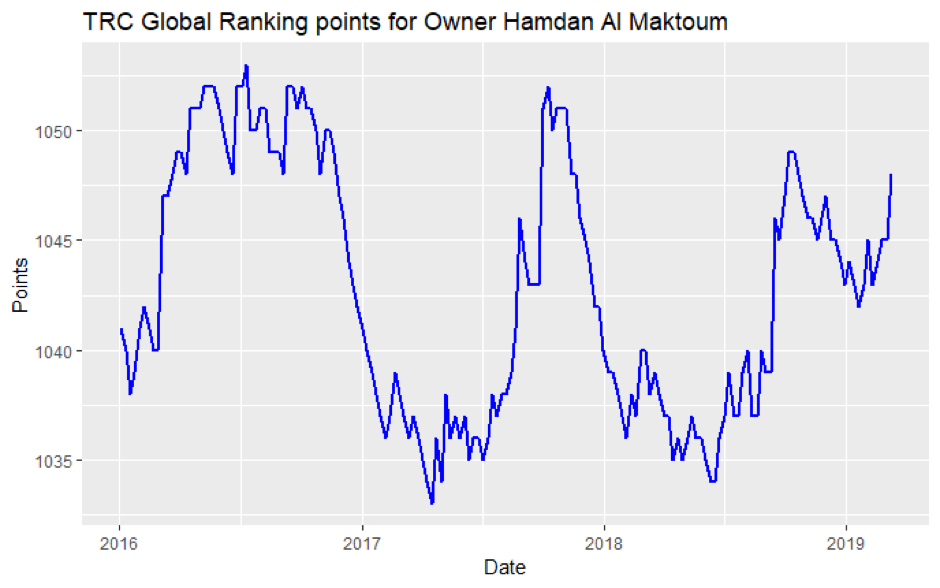 The table contains the data produced by Cummings aggregated by year. Notice RANK, the final column. Hail the power of TRC Global Rankings! Despite the small sample-size of Cummings’ first couple of years, he was quickly promoted to the Top 80. The following season, 2017, he had only a seven percent strike rate, but this was misleading. Cummings was struck by bad luck, placing 29 times to only eight wins. Because our rankings take the position of every runner into account – win or lose – and the quality of competition that the stable’s runners were facing, Cummings gained 37 places from #80 to #40. Two years later, he has reached the top ten.