On the eve of Dubai World Cup day, the most lucrative race meeting in the world, Chris Smith looks at the strange case of the G1 Dubai Duty Free (since renamed the Dubai Turf) and wonders why a $5 million turf race that could have been designed with Americans in mind has attracted just two U.S. contenders in the last four runnings.

Imagine an international race over a mile and an eighth on a tight, U.S.-style turf oval with as much prize-money on offer as the Breeders’ Cup Classic. Then imagine that only two of the horses ranked in the top 50 in the world by the International Federation of Horseracing Authorities (IFHA) are likely to run in it, and that you can earn $100,000 for finishing sixth.

Sound a bit far-fetched? Well, you don't have to imagine it. The $5 million G1 Dubai Duty Free is the seventh race on the card at Meydan Saturday.

This is one of the world’s “Magnificent Seven” $5 million-plus races, along with the Melbourne Cup, the Prix de l’Arc de Triomphe, the Japan Cup, the Breeders’ Cup Classic and the two races that immediately follow the Duty Free tomorrow night – the Sheema Classic and the Dubai World Cup (richest of them all at $10 million).

The difference is that four of these super races are contested at a mile and a half or longer. Even the Breeders’ Cup Classic and the Dubai World Cup, both a mile and a quarter, are less a test of speed than the Duty Free, which is by far the world’s richest turf race under a mile and a half.

And, to be honest, it doesn’t take as much winning as the other six. Aside from the classy David Junior, who won the first running after the race was elevated from mere $1 million contest to the elite level of the “Magnificent Seven” in 2006, there have been a string of largely low-profile winners who have struggled to trouble the judge in other top-flight contests.

So, do the Americans see this as easy money? Not only does it get their competitive juices flowing, it’s also top of the list when trainers sit down to map out the year for their good horses, right? It stands to reason that some of the best eight- and nine-furlong turf performers in the States are in the lineup, right?

If you read TRC's story on Dubai yesterday, you already know how many American runners will contest the $5 million G1 Dubai Duty Free on Saturday. None.

That will mean, astonishingly, that just two U.S. horses have taken their chances in the four most recent runnings (Little Mike was unplaced last year; Victor’s Cry earned $150,000 for finishing fifth in 2011) - $20 million on offer and barely a flicker of interest Stateside.

It wasn’t always thus. Between 2006 and 2010, there were 12 American runners, nine of them G1 winners, including two who triumphed in the Breeders’ Cup Mile and one in the Breeders’ Cup Turf. And maybe it’s the fact that most of them finished out of the money – behind many horses they might reasonably have been expected to beat - that has led U.S. owners and trainers to give up on the Gulf, to leave the richest pickings in racing for those greedy hordes from Europe, Japan, Hong Kong and South Africa to squabble over.

Not all of those American raiders failed to return a profit, of course. Richard Mandella’s The Tin Man came away with $1 million for running second to David Junior in 2006, two places ahead of Todd Pletcher’s Host, who won $250,000, the same sum credited to the owners of the James Cassidy-trained The Usual QT, fourth in 2010, one place ahead of Pletcher’s Take the Points (who received $150,000).

But the dismal showing of others has surely helped create the myth that Dubai was bad for business, that the trip was just too far, took too much out of a horse, that the races were too much too soon, that a trip to Dubai impacted too severely on the rest of the campaign.

And the Sheema Classic, that other relative newcomer to the ranks of the “Magnificent Seven,” doesn’t help the cause either – 12 U.S. runners since ‘06 (eight of them G1 winners) and just one earner (Neil Drysdale’s Marsh Side, who took $150,000 for fifth in 2009). But then what would you expect? The Sheema is a different deal entirely from the Duty Free. It’s a mile and a half, and it takes a lot more winning by virtue of the fact that there’s generally a better class of international runner than you get at a mile and an eighth. They didn’t frame the Sheema Classic with Americans in mind.

The trend is the same, though, in that you hardly see an American in the lineup these days. This year, Twilight Eclipse, who runs for major U.S. syndicate group West Point Thoroughbreds, will be the first U.S.-based Sheema Classic contender since 2011.

The 5-year-old is trained by Tom Albertrani, who lived and worked in Dubai for eight years as an assistant to Godolphin trainer Saeed bin Suroor, and continues to train for Sheikh Mohammed’s U.S. racing operation, among other clients.  Therefore he may be much more predisposed than most American trainers towards an Emirates expedition – and probably much more aware of the possibilities, too.

“We would not go if we didn’t think we had a realistic chance of winning the race,” Albertrani said. “I think we have a very good horse, very unlucky in the Breeders’ Cup [he was fifth behind Magician, who runs against him again tomorrow]. I thought we had a very good chance in there as well and he was only beaten a few lengths after sitting way, way back – a little further than he should have been - that day. But he ran extremely well in the Breeders’ Cup, and he won both his races this year. I think he’s a very legitimate horse at a mile and half.”

Albertrani acknowledges that horses need time to get over a venture to the UAE, but he doesn’t subscribe to the theory of the Dubai bounce.

“I don’t believe that whatsoever,” he said. “I think if you manage your horse to where you know that they’re going to need some time to get over the trip, they should come back to their full potential.”

So, Albertrani knows what to expect with Twilight Eclipse.

“We know we’re not going to be looking at any races probably until maybe July. But this is a race that for West Point, the partners, it’s just a chance to experience racing and traveling to Dubai.” 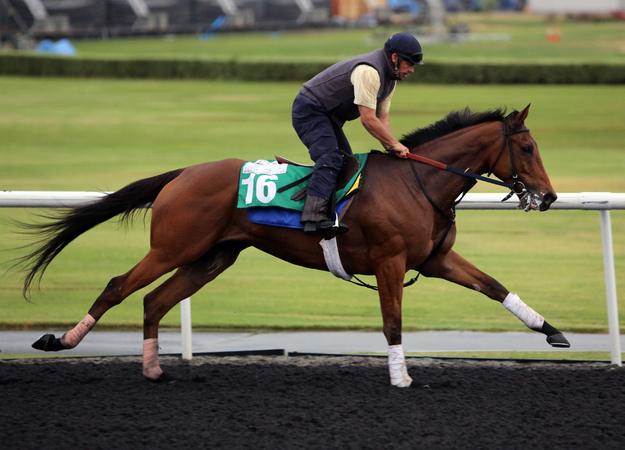 Dubai World Cup-winning Richard Mandella, who also saddled The Tin Man to be second in the Duty Free, believes one of the biggest problems for fellow U.S. trainers may be the timing of the meeting.

“It is a time situation after our Breeders’ Cup where you might have had a really hard year to get to the Breeders’ Cup and you might be resting and not back in your best form,” Mandella said. “There’s no big turf races early in the year that are big enough to make that the focal point of your racing. The best turf races are in the later half of the year, so the timing probably has something to do with it.

“I don’t think it’s to a degree that you should not consider it. Every horse is different. Some are going to take it much better than others.”

Graham Motion agrees that the timing can be tricky.

“I think the grass races are always going to be tough for us because every year we find in the Breeders' Cup that the international grass horses tend to be better than our grass horses, and also, it's the very beginning of the season for us,” Motion said. “In particular, I think that makes it a little tough.”

It certainly does make it tough, but the day comes just as early in the season for the European trainers as it does for the Americans, and that doesn’t seem to be a problem that fazes Aidan O’Brien, for one. The late St Nicholas Abbey was second in the Sheema in 2012 and won it last year. Each time it was his first run of the year and each time he had been trained for the Breeders’ Cup the previous November (he won the Turf in 2011 and was third in 2012). And the master of Ballydoyle is doing the same thing this time with November’s Breeders’ Cup Turf victor Magician (Sheema Classic) and October’s Champion Stakes third Ruler Of The World (Dubai World Cup), both favoured tomorrow in their first outings since those exertions.

Strictly speaking, the facts do not really back up the theory that the international horses are better on turf than the Americans. It may be true at a mile and a half, but at eight to 10 furlongs the story plays out differently. Just look at the evidence of recent Breeders’ Cups.

Sure, the Europeans have largely had the Americans’ measure in the Turf, but the Mile – the top-level U.S. race that most closely resembles the Dubai Duty Free – is a different story. Wise Dan led home a 1-2-3-4-5 for the States last year (with top European Olympic Glory well behind) and a 1-2-3 in 2012 (ahead of star Ballydoyle miler Excelebration). In 2011, third-placed Goldikova was the only European in the first eight in a race won by the Dale Romans-trained Court Vision.

What of Wise Dan anyway? How might he fare in Dubai?

“If [the Americans] were to send a top horse like Wise Dan,” speculated International Racing Bureau Managing Director Alastair Donald, “I would expect him to be odds-on and romp home in the Duty Free.”

But the dual U.S. Horse of the Year will be back home in his barn tomorrow when another, probably inferior, animal is winning an amount of money that Wise Dan could only equal by winning the next three Breeders’ Cup Miles.