Blue all over. The familiar silks of Sheikh Mohammed's Godolphin operation dominated the All-Weather Championships scene in Britain, reaching a zenith as the campaign closed on April 3 with a treble of important races on Finals Day at Lingfield Park racecourse in Surrey.

This is a departure from the norm for Godolphin, an attempt to propel the Newmarket-based operation of trainers Charlie Appleby and Saeed bin Suroor – who sent out Prince Bishop to win the latest Dubai World Cup – into the turf season with a contingent of sharper, fitter, more forward horses to add to those laid off since last year.

(Godolphin also own horses with Newmarket trainer John Gosden, but for the purposes of this article it's Appleby, bin Suroor, and when considering previous numbers, disgraced former handler Mahmood Al Zarooni who will be considered as Godolphin trainers.)

To underline the difference with previous campaigns, when Godolphin trainers have had scant representation, consider the evidence of Table 1, which aggregates all-weather (AW) performance for the months November to March (a slightly shorter period than the All-Weather Championships) since 2008-09. The column headings used are consistent for all tables of this type presented. 'W' is wins and 'R' is runs, thus 'SR' is percentage strike-rate. To account for the effect of field-size (a strike-rate of 20 percent implies something very different in Kentucky Derbys than in five-runner claiming races) the statistic of choice is 'IV' or Impact Value. This is a ratio that expresses strike-rate considering field-size; Godolphin's IV in 2014-15 between November and March of 2.94 means they won 2.94 times as many races as random chance.

To further account for the prior expectation of those Godolphin runners in each race they took part, we turn to the betting market for a kind of crowd-sourced opinion. Here, 'xW' is the total number of winners Godolphin should have sent out if their runners performed to the expectation of the Betfair exchange odds for each race. If we subtract this total from the winners they actually enjoyed 'W', we get 'WAX' or Wins Above Expectation.

Of course, the more runners Godolphin had each year, the greater their opportunity to boost the 'WAX' statistic, so AE or 'Actual over Expected' expresses the same information on a per-runner basis, similar to IV. In the 2014-15 season just past, for instance, Godolphin sent out 2.3 more winners than expected by Betfair opinion, which is a ratio of 1.09, or 9 percent more.

A pie chart where each slice represents the numbers of wins accumulated in AW campaigns further illustrates Godolphin’s dramatic change of strategy: 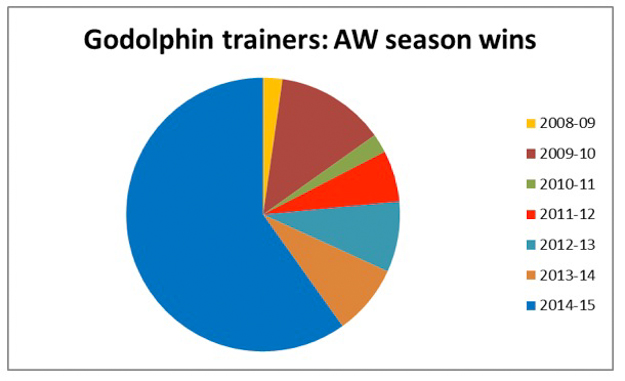 Let's now drill down into Godolphin's performance relative to other trainers during the past All-Weather Championship period. Their string was concentrated with Appleby.

Table 2 aggregates performance on British all-weather tracks from Oct. 30, 2014, to April 3 by trainer, comprising more than 150 fixtures and 900 races at Lingfield Park, Kempton, Wolverhampton, Southwell, and Chelmsford City. (Lingfield Park, Kempton, and Chelmsford City have a Polytrack surface, Wolverhampton is now Tapeta while Southwell has always been Fibresand, a dirt-like deeper track.) Cynics might consider Godolphin's success in the All-Weather Championships akin to Manchester United defeating lower-league opposition or the Yankees beating down a Triple-A team. That would be missing the point to some extent, however, for owning lots of horses, as Godolphin does, inevitably means owning lots of moderate horses as well as good ones, and these too need placing to advantage whomever they represent.

Still, with Aidan O'Brien's battalions resting up for the start of hostilities on the grass, and most of the big guns of British racing engaging only a limited portion of their resources to the All-Weather Championships, Godolphin's superb efficiency on the sand does not necessarily portend a similar improved showing in the summer. Having gained this momentum, it will be interesting to see if the boys in blue can arrest a worrying seasonal trend delineated by Table 3, which summarises British flat racing on all surfaces by month since 2007. And here is a chart that illustrates this monthly trend: Simply put, Godolphin doesn’t get going until the British classics have been run. The figures underline that their performance in April, May, and June is well below the excellent standard they achieve from July onwards. Look at their lower IV figures in May and June – when four of the five British classics are run – compared with later in the season. Whether Godolphin has had the quality of horse capable of winning a classic or not, their horses are just not peaking at the right time to do so.

Historically, this has surely been some function of the Dubaian domestic season and the concept – now seemingly falsified – that wintering horses in warm weather confers an advantage when they return to a colder climate.

Indeed, it is much to Godolphin's credit that they have recognised this and integrated it within a seemingly revised strategy. As stated above, running up numbers in a comparative backwater of British racing doesn't prove that the tidal wave of winners will follow in Group races, but practising efficiency in any environment tends to instil a winning habit in any organisation.

More significantly, the signing of impressive young riders James Doyle and William Buick is a huge plus. As Table 4 shows, with Doyle and Buick in Dubai during the winter, Godolphin's all-weather winners in Britain were mostly partnered by Adam Kirby and apprentice Shane Gray. (Kirby has long been a superb rider according to jockey metrics and no doubt contributed to Godolphin's success in no small part.)

The leading Godolphin horses proved to be Tryster and Pretend. The former has earned a British Horseracing Authority (BHA) rating of 112, commensurate with the level normally required to win an average G3, which he did at Lingfield Park in the coral.co.uk Winter Derby in March. Pretend, an exciting sprinter, reached BHA 109 when winning on the Winter Derby undercard and following up, like Tryster, on Finals Day.

Both horses have a late-running style, which seems over-represented among good synthetic-track performers.

Table 5 shows the performance of Godolphin trainers by track. Performances at Lingfield Park are some way ahead of those at the other tracks, according to IV. Moreover, performance against the expectation of the Betfair market suggests there is something specific to the environment of racing at the Surrey venue that particularly suits Godolphin-trained runners. They have gained nearly 27 WAX from a sample of 277 runners, which the AE ratio shows is 36 percent more than anticipated.

In all, this is a most interesting time to consider Godolphin's trajectory. Sheikh Mohammed's investment in bloodstock – to which he added £30 million at the Tattersalls Book One Sale last autumn – means that, if Godolphin thrive, so does flat racing in Britain. They have dominated the sand; will the turf prove an equally sound footing?