Hugely exciting colts Prince Gibraltar and Karakontie head the market for Sunday’s Prix du Jockey Club (French Derby) at Chantilly Racecourse, a race that would probably look completely different had it not been for a dramatic change to the country’s Classic program 10 years ago. It was a change that benefited the race, but not the rest of the calendar, as Emmanuel Roussel reports.

Ever since it was created in 1836, the Prix du Jockey Club has been known as the French version of the Derby, established at Epsom half a century earlier. It was run at picturesque Chantilly over a mile and a half (2,400 metres) with the aim of identifying the best French 3-year-old colt each season.

For the following 100 years, though, the top French race was the Grand Prix de Paris, run at the end of June and for most of that time over 3,100 metres (just longer than 1m 7f), a full circle of the newer Longchamp Racecourse. (By the 1960s, the Prix de l’Arc de Triomphe had taken over as the showpiece of the French season.)

Then in 2003, Édouard de Rothschild was elected President of France Galop, and the newly appointed supremo of French racing, whose relative Nathaniel had won the 11th running of the French Classic back in 1846, decided to break the mould.

The bold, charismatic newcomer simply looked at the facts. Even though the French Derby had had its moments of glory when the Epsom showpiece had failed to deliver, the Prix du Jockey Club was still somehow seen as a pale shadow of its neighbour to the north. Despite all its flaws, the Epsom course was still more popular to breeders, international owners, and the world as a whole. Run over the same distance only days apart at most, both races were somehow competing, but Chantilly would only ever be a second string to the British race.

Indeed, when the 1995 winter Derby favorite Celtic Swing was supplemented to run at Chantilly rather than in Britain, Racing Post Bloodstock Editor Tony Morris threw three words on the front page at the beautiful colt's connections: "Sad, Mad, Bad." The best horses should always run at Epsom, he insisted.

Rothschild's arguments were convincing. Not only were the main breeders and buyers alike favouring milers and intermediate distance horses as sires, but the standard of the French Derby seemed to falter every year, even though the great Montjeu had swept all before him in 1999.

Besides, shortening the French Derby distance from 2,400 to 2,100 metres would put the Prix du Jockey Club back on the map for most trainers concerned about their young milers' stamina.

Of course, there was some rearguard barking, technocratic resistance, and the French traditionalism that regularly plagues the country’s institutions. Yet, Rothschild brought the project to fruition. In 2005, after one of the worst editions of the race ever, a new French Revolution was printed in the conditions book and that was that. The French Derby was shortened to 2,100 metres.

The G1 Prix Lupin, run at Longchamp over 2,100 metres and widely seen as possibly too tough a challenge anyway at that stage of the season, could not survive with the new Jockey Club being run over the same distance just four weeks later and was scratched. The Grand Prix de Paris, which had been cut back to 2,000 metres in 1987, was moved to Bastille Day (July 14) and extended from 10 to 12 furlongs in an attempt to become the third jewel of a hypothetical French Triple Crown - along with the Jockey Club and the Poule d'Essai des Poulains (French 2,000 Guineas) in early May.

In addition, the G2 The Prix Eugène Adam, for 3-year-olds over the Maisons-Laffitte straight course in July, was boosted in the hope that it would be promoted to G1.

The whole job was rather swift and brutal, but the road to the Classic had not been properly redesigned. There is still something not quite right about it. The trials are essentially the same as they were when the Prix du Jockey Club was run over 2,400 metres. A couple of the trials have had their distances trimmed, and most of them have been moved from one place or time to another, but really little consideration has been given to preparing contenders for the shorter distance.

Nevertheless, there have been plenty of successes. Shamardal won the first revamped edition and soon became an outstanding sire. The winner in 2009, Le Havre, also shows encouraging signs as a young stallion, just like his successor in the roll of honour, the smashing Lope de Vega.

Moreover, the new Prix du Jockey Club has found a deserved place in the concert of turf nations, just like the Prix de Diane (French Oaks) has always had without anyone voicing concerns because of its shorter distance (it has always been over 2,100 metres). Some argue that fillies need more time to flourish, yet the Brits never really considered the argument for the Epsom Oaks, nor the Americans with their own Classics.

The French Derby is not just another Derby anymore. It is a different appointment for a different horse, a different opportunity.

Yet, dissatisfaction remains because of the rest of the program. As Alain de Royer Dupré, winner of six editions of the Prix du Jockey Club, including two since the big move, put it mildly: "The French Classic program has been severely damaged and it needs some fixing."

There is some convincing to do while France Galop works on more urgent projects. The Prix Eugène Adam's promotion proved a failure and the extra money was rechanneled toward the G2 Prix Guillaume d'Ornano, a 3-year-old race over 2,000 metres in August at Deauville-La Touques Racecourse that has already proved very successful.

The devil is in the details. 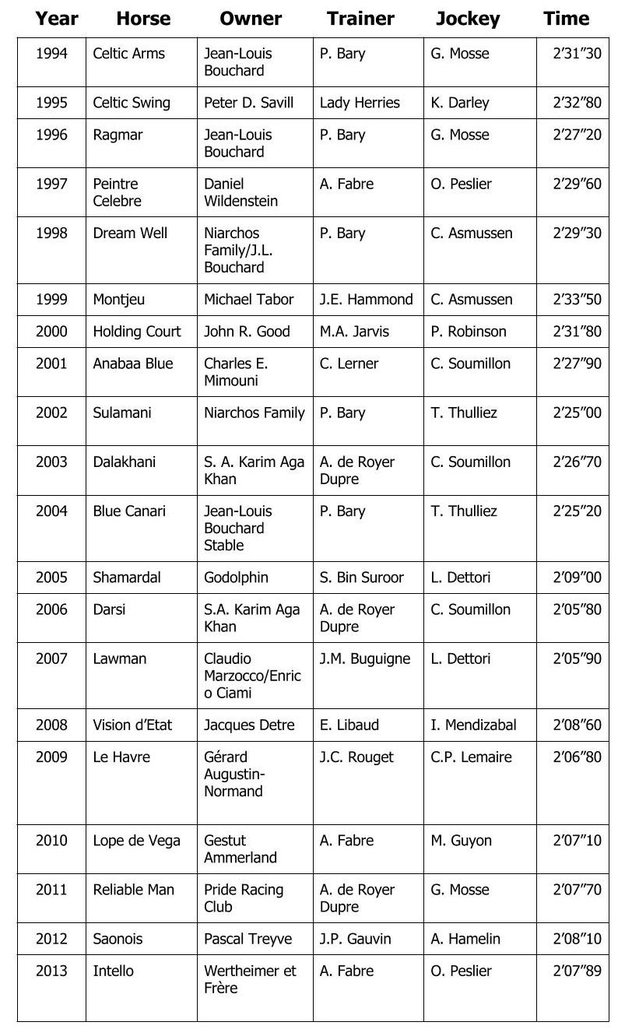