Back in 2013-14, he was ladling up Group 1 wins, mainly on the tough Sydney circuit, at a rate that would have made Aidan O’Brien envious. His partnership with trainer Gai Waterhouse, who was in the midst of a purple patch herself, was dominating the big action, and Rawiller had won the Sydney jockeys’ premiership title three years out of four. At the Sydney autumn carnival in 2014 alone, he won five G1s.

Yet now he is not even the highest rated rider in his own family. 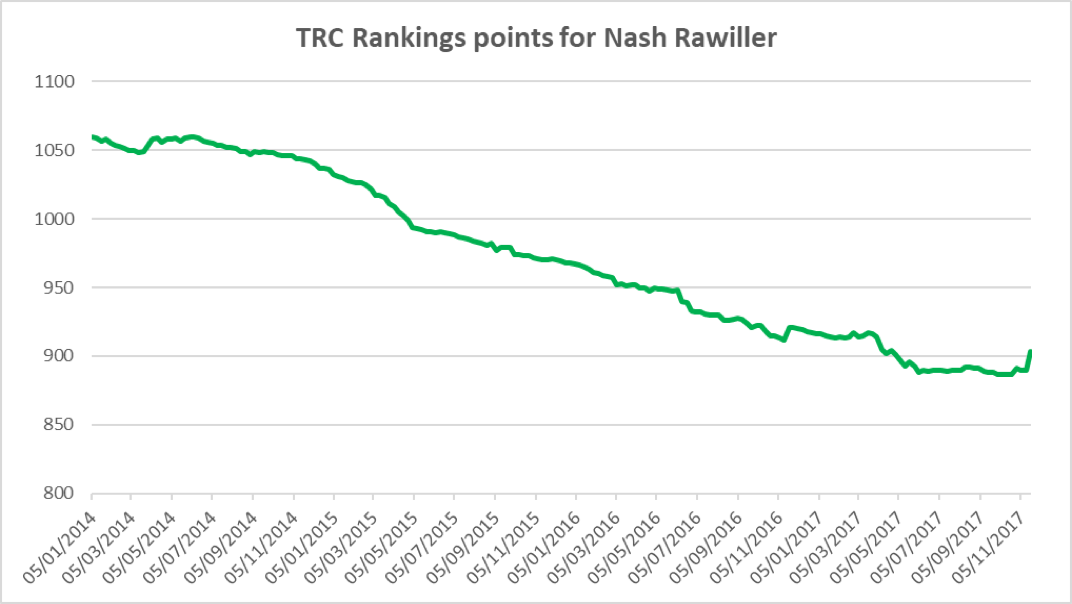 This graph of his weekly points totals in the TRC Global Rankings since the start of 2014 tells a clear story. It looks more like the side view of a particularly treacherous downhill ski course than the trajectory a world-class jockey’s comparative standings with his contemporaries.

And look at his stats in the rankings table, in particular at that big fat zero in what was once a bulging entry under G1 Wins.

Don’t think for a second, however, that this plummet means he’s not as good as he once was. He retains most if not all the drive and ability that took him to that #1 slot.

Certainly an apparent falling out with Waterhouse made some difference, but the real change began when he went to Hong Kong, after a brief stint in Japan, later in 2014.

“It’s just something I had always wanted to do, ride in Hong Kong, but I thought I would be too heavy for [it],” he told the South China Morning Post. “You get to 40, I’ve done everything I had wanted to do at home and it’s not a good position to be in. You need to set yourself goals and keep raising the bar to keep focused.”

As followers of TRC Global Rankings will be aware, for a jurisdiction with racing of such high quality, Hong Kong is blessed with relatively little Group-race action, meaning there are few opportunities for many individuals who compete there to maintain a ranking commensurate with their ability. Of course, the TRC algorithm takes what Group races are run there extremely seriously, which is why it is normal to see a ranking points uplift from the principals after a weekend of Group action like the one that’s just taken place at Sha Tin.

While some jockeys - Joao Moreira and Zac Purton, for instance - have stayed fairly prominent in the rankings because they have commuted regularly to Australia (which has a huge number of Group races), Rawiller has largely stayed put in Hong Kong, and he has missed some of the top-level action even there through suspensions.

Last Sunday, though, it was vintage Rawiller. His ride on G2 winner Mr Stunning (see YouTube video below) was one of the highlights of the Sha Tin card on what is considered a trials day for the Hong Kong International Races on December 10.

It was Rawiller’s first Group victory of any kind for 12 months.

The John Size-trained son of Exceed And Excel is now considered the one to beat in the G1 Hong Kong Sprint.

Sunday’s win helped Rawiller to the highest TRC points gain of the week worldwide - 13 - and catapulted him 131 places up the jockeys’ standings to #191. Suspension kept him out of the International Races last year, but maybe this is the start a Rawiller revival in terms of his world rankings trajectory.

It was a pretty memorable day for Size, too. The 63-year-old native Australian, seven times Hong Kong’s champion trainer, didn’t just saddle the winner of the G2 BOCHK Jockey Club Sprint (that was Mr Stunning’s race), he saddled the second, the third and the fifth as well. That was the main reason for an 11-point gain and a nine-place climb to #21 in the trainers’ standings.

The three G2s showed Hong Kong’s defenses are in solid shape for the international spectacular. The John Moore-trained Werther looked to be somewhere approaching his best when getting up to win the mle-and-a-quarter BOCHK Jockey Club Cup, and he is now generally favourite for the G1 Hong Kong Cup on December 10; and Seasons Bloom, trained by Danny Shum and ridden by Moreira, is a leading contender for the Hong Kong Mile after victory in the BOCHK Jockey Club Mile.