There was plenty of movement in the TRC Global Rankings in the week that ended last Sunday, and expect a lot more next week with Goodwood and Deauville in Britain and Saratoga in the U.S. providing much action at the top level. Today, however, we  concentrate on a particularly outstanding effort in the Southern Hemisphere.

South African jockey RICHARD FOURIE earned the biggest gain in TRC Global Rankings points last week when riding a G1 double at Greyville. Success on Kasimir in the 6f Mercury Sprint and Rainbow Bridge in the 9f World Sports Betting Champions Cup saw his Performance Index rise to 997 – a gain of 12 points on last week and a new career-best.

As a result, Fourie gains his highest ever ranking of #27. This puts him behind only the great Anton Marcus (#14, 1017pts) among jockeys with a Modal Country of South Africa. In third place is a big gap back to the highly promising Lyle Hewitson (#72, 955pts).

Fourie, 33, grew up near Vaal racecourse in South Africa and has amassed a ton of experience, including with some of South Africa’s best horses, such as Jay Peg and Gimmethegreenlight – the latter a big mover himself in the TRC Sires ranks, up 12 places to World #85 this week.

Fourie has had 132 Group rides in TRC Global Rankings history, winning on 23 of them, which is a 17 percent strike rate. No fewer than 68 of those opportunities came for our current South African #1 trainer Justin Snaith who sits at World #17 this week, just two slots above chief rival World #19 Mike De Kock.

Of the two Fourie-ridden winners, Kasimir was indeed trained by Snaith, but Rainbow Bridge’s conditioner is Eric Sands. Fourie also rode Rainbow Bridge to victory for Sands in the G3 Highlands Stud Winter Classic at Kenilworth in May, 2018. 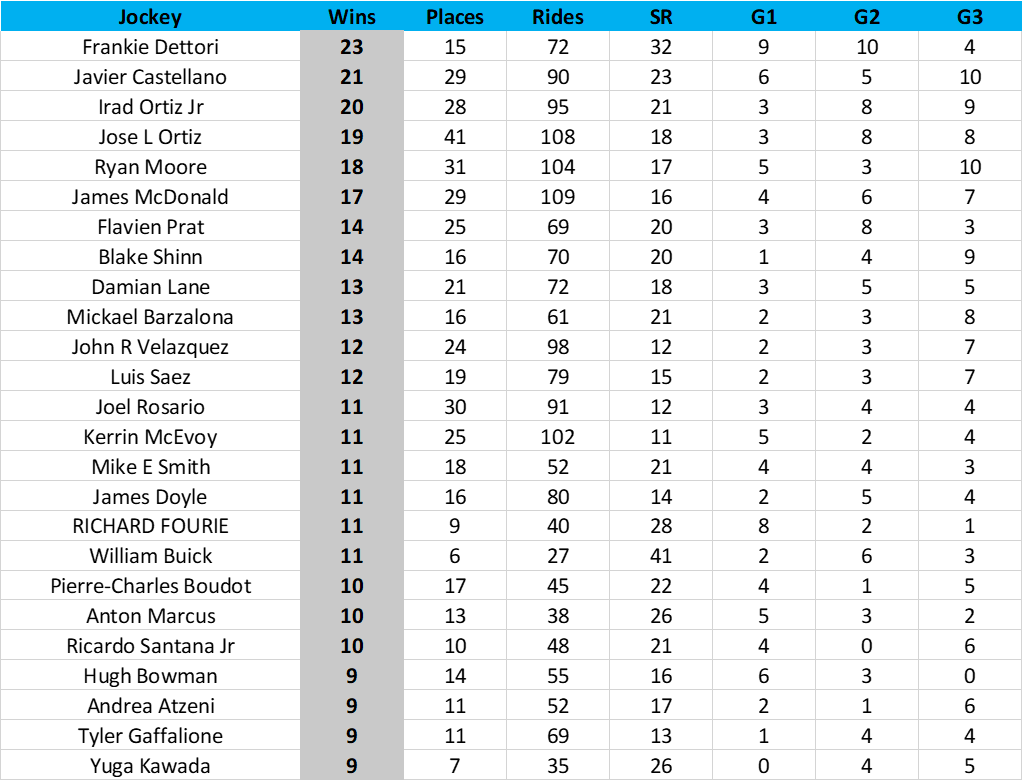 As a result of his two wins, Fourie also rises in the table of jockeys by aggregate wins in 2019 (above). He is having an excellent campaign with 11 Group winners now, including eight at the highest level, coming at an excellent 28 percent strike rate.

The table is led by the brilliant World #2 Frankie Dettori, who continued his golden summer in Europe with victory in the G1 King George VI and Queen Elizabeth Stakes at Ascot on dual Arc heroine Enable. Dettori and Enable’s trainer, World #3 John Gosden, both seem on a trajectory to take over the World #1 rank in their respective categories before too long.