It was probably the way he prepared Firing Line for the 2015 Kentucky Derby that did it. Englishman Simon Callaghan - it was likely more a case of ‘Simon Who’ to the racing folk of the Bluegrass State back then - made plenty of people sit up and take notice when the colt ran second in the Run for the Roses. And that led to the happy position he’s in now - eyeing Churchill Downs once more with another exciting 3-year-old.

There is, however, one problem his contender this time may face that’s remarkably similar to the one that deprived Firing Line of the ultimate glory on the first Saturday of May two years ago.

Then Firing Line came up against an equine freak in American Pharoah. This year Callaghan is preparing Kentucky Oaks hopeful Abel Tasman, and there is another potential great in the way - the seemingly unstoppable Unique Bella.

Callaghan, the son of former Newmarket trainer Neville Callaghan, may not have been particularly well known in Kentucky in 2015, but he had been making his mark on Californian racing since his arrival five years earlier.

Whatever he had done, it had impressed Firing Line’s breeders, Clearsky Farms (also the breeders of world champion Arrogate), enough for them to send him Abel Tasman - they retained ownership of the filly. “They must have been keeping a close eye on the way we campaigned Firing Line,” Callaghan says. “One day I received a text message from Clearsky offering me to train Abel Tasman.”

It may have been a slightly unorthodox way of offering a well-bred yearling to a trainer, but communications are changing and it is not uncommon nowadays. Did he believe it at the time? “Yes, I knew straight away that it was serious,” he says. 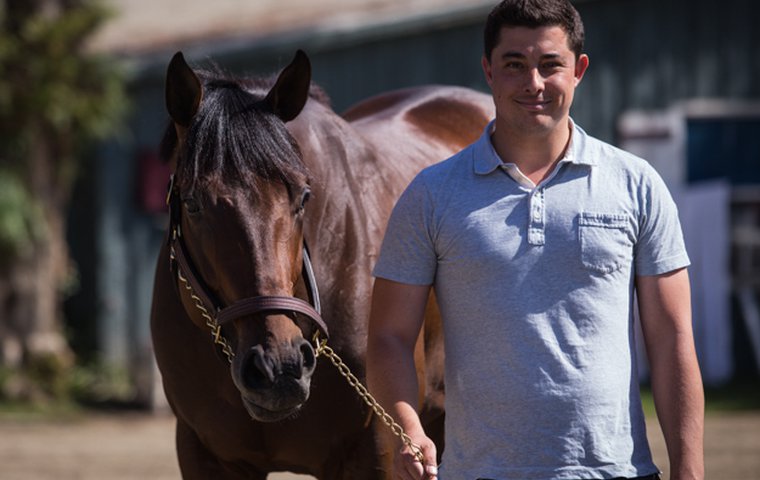 Seven years have now passed since Callaghan’s move from the UK, and these have been years of relentless progress. His G1 winners include Fashion Plate, Taris and the ex-British Dubawi Heights. Firing Line was no fluke.

Coming off a 14-length win in the G3 Sunland Derby, the $240,000 Keeneland graduate by Line Of David was seen as a live longshot at Churchill Downs. His easy prep win was as expected. The colt had gone down by just a head to Bob Baffert’s Dortmund when making his seasonal debut in the Robert Lewis – just as he had done when the two colts met in the Los Alamitos Futurity seven weeks earlier.

“I think Firing Line can beat Dortmund,” Callaghan said at the time – and he did. The only trouble was Baffert also had American Pharoah in the race. Taking the first leg of a historic sweep of the Triple Crown, American Pharoah beat Firing Line by a length, with Dortmund third. But for ‘Simon Who’, the 141st edition of the Kentucky Derby would have resulted in a Baffert exacta.

Abel Tasman upset an odds-on Baffert favourite when outstaying American Gal to land the Starlet Stakes at Los Alamitos last December. She is set to reappear at Santa Anita on Saturday in the G3 Santa Ysabel Stakes over 1 1/16 miles. She is strong, scopey filly with stamina. The main problem, of course, is Unique Bella, not only hot favorite for Churchill Downs but also set to run in the Santa Ysabel.

Callaghan is under no illusions. “Unique Bella is incredible,” he says calmly. “I think she could be a once-in-a-lifetime horse.”

Abel Tasman is a daughter of Lane’s End stallion Quality Road, who won three G1s (the Donn Handicap at Gulfstream Park, the Met Mile at Belmont and the Woodward Stakes at Saratoga), and whose son Guest Suite, trained by Neil Howard, is in the mix for this year’s Kentucky Derby.

Abel Tasman’s dam, the winless Deputy Minister mare Vargas Girl, is also the dam of Sky Girl (by Sky Mesa), who won the seven-furlong G3 Dogwood Stakes at Churchill Downs at three, having run third in the nine-furlong G3 Arlington Oaks on her previous start. Vargas Girl is a half-sister to two smart juveniles in Bevo (who won a G1 at Belmont and a G2 at Saratoga) and Moonlight Sonata (winner of a G3 at Arlington) but everything Abel Tasman did last year suggested she would be better with age, and that she will stay better than most come Oaks day in Louisville.

“She shows plenty of stamina,” Callaghan points out, “and it will be interesting to stretch her out in distance.”

Abel Tasman was successful around two turns in the Starlet. Sitting in second last around the first turn, she advanced to fifth while racing with zest going into the home bend, and she finished strongly to catch American Gal for a cheeky one-length win.

The runner-up was coming off a good third in the Breeders’ Cup Juvenile Fillies, and Mopotism, third home in the Starlet, went on to fill second behind Unique Bella in this year’s G2 Las Virgenes Stakes.

“We were not surprised by her win at Los Al,” Callaghan says. “I knew all along that she was a classy filly. I expected her to win first time out, in a six-furlong maiden at Del Mar, but she broke slowly, was bumped and finished fifth that day. I stepped her up to a mile at Santa Anita a month later and she won well. Her third start was over seven furlongs at Del Mar in November, when she clocked a good time to beat a nice Baffert filly called Fact Of Life.”

The race falls nine weeks before the Kentucky Oaks. “It is a prep race to the Santa Anita Oaks,” the trainer says, “but we might take her to the Sunland Park Oaks after the Santa Ysabel … I want her to take the same route to Churchill Downs as Firing Line did.”

The listed Sunland Park Oaks, run on March 26, is run over 1 1/16 miles. Set to be staged on the day after the Dubai World Cup, the G3 Sunland Derby and the Sunland Park Oaks are back in the calendar this season after having been scrapped due to an equine herpes virus quarantine at Sunland last year.

Abel Tasman earned 10 points towards a berth in the Kentucky Oaks when winning the Starlet. The Santa Ysabel and Sunland Park Oaks are both worth 50 points to the winner.

ON TRC ON FRIDAY