Romain Clavreul remembers the day a horse hit him so hard he was knocked out for two days. In truth, he remembers everything up to the moment when his head felt the brute force of an equine skull travelling at racing velocity.

“I broke all of my teeth - the top, they’re all fake,” he says, running a finger above his top lip. “I jumped the fence, fell and I was okay. I stood up and the horse from behind hit me - the horse’s face hit me in my face. I broke both of my collar bones and my ribs, my ankle. It took me eight or nine months to recover.”

That head-butt from a descending Thoroughbred came during a hurdle race at Cagnes-Sur-Mer n France on 21 December, 2012, when Clavreul, 17 at the time, was living out his boyhood dream. It could have ended his work with horses for good.

“I just remember waking up and I had no teeth. I had 69 stitches in my mouth and they stitched my lip because they didn’t want me to open my mouth. I was three weeks with no teeth, so I was eating with a straw. I lost 11 kilos. It was a tough time,” he recalls.

“When that happened, my family said ‘no more, you have to stop everything’ and I said, ‘no, that’s not going to happen.’ I understand why my family didn’t want me to ride again. My mum was crying more than I was - it wasn’t a good time.”

But it was not the end. The horror collision set him instead on a path that has taken him to Hong Kong and the finest Thoroughbred he has had the privilege to ride - Beauty Generation.

“I don’t take a day off, he’s that kind of horse,” he says. “We get one day off a week and I might stay in bed a bit longer on that day, but if Beauty’s going out, I’m coming to ride him. He’s that important to me!”

The Frenchman is besotted with the six-time G1 winner. He believes Patrick Kwok’s Road To Rock gelding is “special” in ways that go beyond his incredible racing ability; he believes he has developed a bond with the sometimes vicious, often bullying, always cocksure bay.

“In the morning, when I ride him, it’s like he talks. He’s always making some weird noises,” he says. “And he’s dropped me a couple of times, but he has always come back - as if he’s making fun of me a little bit. He knows it! He’s an incredible animal.”

The Frenchman relates an instance a few days before Beauty Generation’s dominant victory in the G2 Chairman’s Trophy earlier this month. “He whipped round, dropped me and ran 20 metres in the opposite direction then stopped,” he says. “I got up and I swore at him a little bit, but I said ‘Beauty, come back will you?’ He came back to me: he trotted 20 metres in a straight line and just stopped right in front of me. He was making noises like he was so happy with himself.

“I just cut my finger a little bit. I was more worried that he was HK$74 million of prize money running away from me!”

Beauty Generation famously loves his Polo mints. Trainer John Moore carries a packet in his pocket just for his star galloper. Clavreul keeps the champ sweet with his favourite veggie. “I spoil him: I will give him carrots before I ride him and then when I come back I let him walk for 20 minutes then I go in his box again and give him more carrots. Oh, man, he’s very spoilt. He deserves it,” he says.

“His mafoo [groom] has been doing an amazing job with him and we’ve been spoiling him for so long now, and he loves it so much that he puts it back in for us on the track. He’s just fantastic.”

Clavreul’s approach means he treats Beauty Generation differently from the other horses he rides. “I will never kick him or slap him with the whip, even when he’s naughty. He has so much spirit that I don’t want to break it,” he says.

“I’ve never had this connection with a horse. You like to think you’re good with horses, but this connection is something special, like really special. This morning, I was on top of another horse and I passed him as he was in the swimming pool. I just said ‘Champ, Champ’ and he paused and looked at me straightaway. He knows my voice, he recognised me. You have to see it to believe it.”

Clavreul fell in love with riding when, as a boy living in his home town of Mayenne, northern France, he set fire to the family’s garage. It was 14 July, Bastille Day, and he and his brother had a mishap with the celebratory fireworks. Their punishment? ‘Sent away’ for a summer in which horse riding featured prominently.

Pony racing followed - aged from 11 to 13 - and then at 14 he joined the racing school. “Not good enough” by his own admission and soon too heavy to make it as a flat-race apprentice, he switched to jumps, learning all he could from a master trainer, Jean-Paul Gallorini, an icon of France’s jump racing scene.

Clavreul rode in 19 races in France, flat and jumps, between June 2008 and December 2012. He achieved one win, aboard Sir Balko in a 2200m flat race at Le Dorat in June 2012. After his injury, Clavreul moved on to England and joined ‘The Boys in Blue’.

“I lied to my mum,” he says. “I said I was going to England to learn English, but I went there to ride horses. I joined Godolphin for three years.”

He had ridden work on good jumps horses in France. At Godolphin he felt the speed and brilliance of high-end flat racers. He sat on Outstrip, who won the Breeders’ Cup Juvenile Turf, and Blue Bunting, who won the 1000 Guineas. “I rode Encke a little bit too - he won the St Leger with Mickael [Barzalona],” he says.

“After that, I was feeling great, so I went to see the doctor and he said I was good to go if I wanted to. I took my licence and started riding as a conditional in jumps races again,” Clavreul recalls.

He had one win in England - on an amateur licence - aboard Flemi Two Toes in a three-mile, one-furlong conditional jockeys’ handicap hurdle at Huntingdon on Boxing Day 2015 - almost exactly three years after the fall at Cagnes-Sur-Mer. “But then I became really heavy and I stopped,” he says.

He moved on to Australia, where he connected with the Moore family for the first time.

“I ended up working for John’s brother, Gary, in Rosehill,” he says. “Gary said John was training in Hong Kong and he said I should apply to go there. Then one day I saw an advert on the internet and I just sent my CV and the Jockey Club rang me a few days later and asked if I’d like to come over. It’s brilliant. This is a massive opportunity and thanks to the club because I’m having a great time here.”

There was a time not so long ago when Moore would refer with increasing regularity to “my French riding boy”. Nowadays, it is “Romain”, although the great man has said that he isn’t quite sure how to say “Clavreul”.

Moore clearly has plenty of time for Clavreul, who plainly has the utmost respect for his boss. “It took me time to get his trust but now he trusts me and I love working for him. If I say something he’ll listen and he’ll ask my opinion,” the rider says.

He works with and observes Moore at close quarters and he is impressed with what he has seen of the seven-time Hong Kong champion and all-time record prize money earner. Moore is currently world-ranked #10 in the TRC Global Rankings.

“John is an incredible trainer,” he says. “Beauty is an example. A Group 1 horse is one thing but having a horse keep winning Group 1 races, that’s another thing. I think he’s the best at keeping a horse at its peak for as long as he needs to. Not many trainers can do that. It’s very hard to keep a champion at this top level and he’s had Beauty Generation there since the start of the season - like he did with Able Friend and Rapper Dragon. He knows how to do it.”

Clavreul, it should be noted, is aware of how fortunate he is to be riding a genuine champion. And he knows that he is just one of many skilled track work riders from Sha Tin to Chantilly working behind the scenes to keep the horses galloping and the sport rolling along. 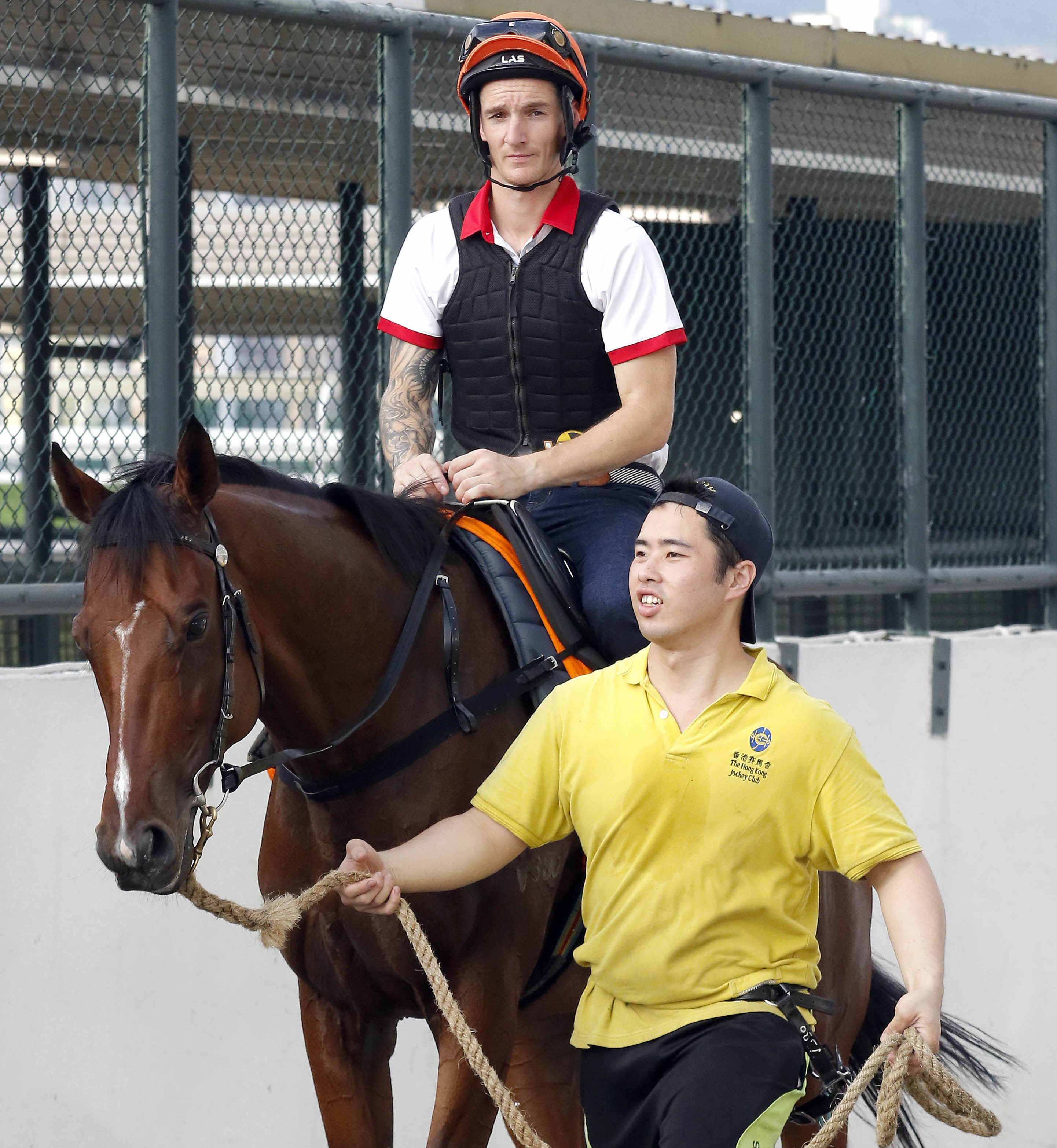 Like the vast majority of his peers, most of who pass through their careers in hard-working anonymity, he is passionate about his job. But also he is keen to one day train his own string and he is absorbing all he can from his current boss, just as he did from the Godolphin operation and his old mentor Gallorini.

“When John comes back from track work he looks at every horse,” he says. “He knows what is going on - he knows to swim more, walk more, work less - just by looking at them.

“He’s 69 now and the way he sees things, he’ll look at the legs and I’m 27 and should see things better than he does, but no, he can be standing a distance away from a horse and he’ll say things like, ‘Oh, you see that joint, we need to be careful with this’. He is a genius with horses.”

Clavreul is something of a pupil to the master and one day hopes to follow in Moore’s footsteps and have his own stable with his own name above the door. But that is for the future. The here and now is Sha Tin and Beauty Generation’s bid to go eight races unbeaten this term.

“Right now, I just want to enjoy Beauty. If I had to ride every day of the year for Beauty I’d do it,” he says. “As much as I’ve ridden lots of good horses - him, he’s special. Of course he’s special because he’s won so many Group 1s and he’s number one in the world now, but he just has something other horses don’t have.

“He knows who I am and I know who he is. He’s so arrogant and the more he wins the more arrogant he becomes - I just like it.”

With a field of familiar rivals set to oppose in the FWD Champions Mile, the expectation is that Beauty Generation’s justified brash confidence will likely be at a peak come Sunday evening at Sha Tin.

Clavreul might need a bigger bag of carrots than usual.