Like the rest of the racing world, Australia has had its share of rider deaths. Since the 1840s, 873 jockeys have died because of their career. But in the last 18 months, a spate of fatal accidents has spurred Australian racing to look again at rider safety. As part of our coverage of riders this week, Gretchen Kijak examines the figures and wonders if they reflect the real state of safety in professional riding.

An adrenaline surge, a rush of speed, and the sweet taste of victory: a winning jockey pumps the air. Whether it’s a remote country track or a metropolitan centre, getting across the line first is all that matters in that final instant of racing. Yet there are endless hours spent behind the scenes, doing the hard yards that it takes to succeed in this physically demanding job. Each victory is the reward that keeps jockeys returning to the mounting yard day after day, risking their lives every time their seat hits the saddle.

The Australian Jockeys Association (AJA) has found that since the 1840s, 873 riders have died in race falls throughout Australia. Professional race riding has been determined as one of the most dangerous occupations on land. In 2009, the Menzies Institute in Tasmania conducted a study that concluded only offshore fishing was more dangerous, and while other studies place truck driving, manufacturing, and mining work at the top of the most dangerous occupations, race riding is rarely far behind.

The Menzies Institute is respected for its world-class research, and its study, published in the Medical Journal of Australia, was compiled from stewards’ reports over a four-year span. It found that licensed jockeys fell once in every 240 rides. Of these falls, almost a third caused injury, and one in 620 falls resulted in death. To put these figures into perspective, last season’s overall Australian premiership-winning jockey Brad Rawiller had 1,055 starts. On the Menzies averages, there was a 25-percent likelihood that he would fall earning his living throughout that year.

The racing season in Australia occurs over 363 days, seven days a week. There are 840 registered jockeys in the country (including apprentices), of which 650 or so are active. While the Menzies data was race-day focused, the AJA insists that injuries and fatalities don’t just occur on race day: they occur during regular trackwork and barrier trials.

“We had only known of 297 jockey fatalities in Australia as of 2005,” said Paul Innes, CEO of the AJA. “But when the [online newspaper archive] Trove became available, we wanted to conduct as comprehensive a study as possible, and National Jockeys Trust manager Tony Crisafi committed to the task of going back as far as he could into the archives. We also get independent information supplied to us by the public, which we validate.”

After 12 months of research, the AJA admits that it can never know for certain that it has accounted for every fallen jockey in Australia’s history of organized racing, but it is satisfied that the information it does have is accurate.

Down through the decades, the 873 riders that have been lost varied from high-profile identities like Neville Sellwood to lesser-known jocks simply plying their trades. In the 1930s, which saw an unprecedented 50 riders lost, promising apprentice H.C. Martin, who rode Phar Lap in trackwork, died on his 17th birthday from a race fall at Gosford, north of Sydney. Phar Lap’s U.S. rider, Billy Elliot, is also on the list, as are Melbourne Cup-winning jockeys Horace Dawes, Roy Reed, Hughie Cairns, and Keith Voitre. 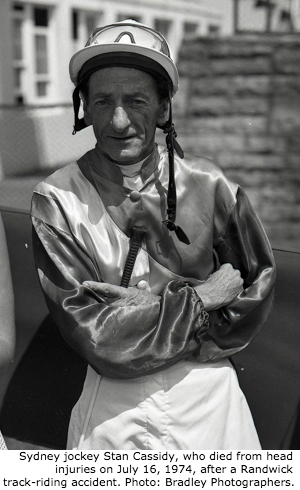 However, recent months have been among the hardest for jockey fatalities in this country.

In the last 18 months, there have been four racing accidents that resulted in the deaths of riders. In a single week in October 2014, Queensland rider Carly-Mae Pye and South Australian rider Caitlin Forrest died in two separate accidents. In August 2013, during the high-profile Darwin Cup meeting, 26-year-old Simone Montgomerie died from a fall, while three months later, Desiree Gill succumbed to injuries after a tumble on the Sunshine Coast.

Each of these four was a young woman among the riding ranks, and their deaths ignited both a safety and gender debate across Australia. The concern that women were more likely to have a fatal race-riding accident was dispelled by jockeys, trainers, stewards, and administrators. While it is true on current statistics that female riders have been found to have a slightly higher fall-rate than their male counterparts, this finding occurred only within women riding horses 4-years-old or younger. In open grades, and among apprentices and early-career jockeys, there were no differences in fall rates between men and women.

“I don’t believe the female factor has any bearing,” Innes said. “There is no evidence to indicate that the recent tragedies are anything but accidents, though we are still investigating. The number of female jockeys has increased substantially in the last five to 10 years, now reaching almost 25 percent [of the jockey population], including a significant influx in apprentices and young riders.”

A coronial inquest occurred into the death of Simone Montgomerie in Darwin. It recorded that the horse she had been riding, Riahgrand, “had an extreme and unusual reaction to the pedestrian crossing that was, at that time, positioned 200 metres from the finishing line.” The inquest recommended to the Australian Racing Board (ARB) against crossings being positioned within the final stages of a race on any track in Australia. The Darwin Turf Club had already removed the one that caused Montgomerie’s fall.

With four fatal accidents in 14 months, an industry outcry occurred around Australia last October, yet Innes admits he is still amazed by the wider public’s lack of attention to jockey fatalities, especially when compared to other sports in Australia. In November 2014, the nation came to its knees when cricketer Philip Hughes died from head injuries sustained during play at the Sydney Cricket Ground. It was a correct reaction to a terrible tragedy, but it had not occurred when Pye, Forrest, Montgomerie, or Gill had died.

In the wake of their accidents, racing participants called for a comprehensive overhaul of riding safety. However, industry bodies called for calm.

“Tracks have never been safer with plastic running rails and better cambers [rail angles],” said ARB Chief Executive Peter McGauran. “Safety equipment is better than it has ever been before.”

Others stated that racing, like many sports, would always incur risk. 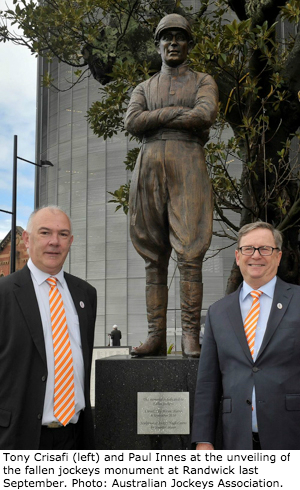 “Racing is one of those sports where there are dangers,” said Jim Watters, chief executive of Thoroughbred Racing South Australia, while John Letts, a former Australian jockey and popular on-track television personality, said: “We can’t stop it. It’s something that’s just going to happen.”

Nevertheless, under pressure to come up with answers, the ARB conducted a study that found 16 of the last 22 jockey deaths were due to massive head injuries, suggesting an immediate need for safer helmets. Major advances had already been made in 2012 with the ARB revealing a new helmet, designed by the University of New South Wales, especially for turf-racing conditions. The unique carbon fibre/foam design has the potential to improve rider safety by up to 50 percent, but the helmets have not yet reached the production stage as manufacturers are finding it difficult to meet the standards.

“The skull caps currently used are primarily designed for eventing,” Innes said. “We are looking into a whole range of safety factors in a meeting scheduled for next month.”

There is no doubt that modern racing is safer than the sport of old. The AJA has found that there is 1.4 jockey deaths per year nationally, considerably down on the 12 per year in the period 1925-1929, and five per year by the 1940s. Equipment, track, and policy improvements have made the sport far safer for riders.

Still, from all facets of the industry, there have been calls to increase safety – reduce field sizes, re-educate owners and jockeys about congestion on the rails, and vet every horse pre-race. There have been suggestions that tougher suspensions are required for jockeys who ride dangerously, and that all riders need to feel comfortable about speaking up if a horse does not feel right on its way to the barriers.

Racing NSW Chief Steward Ray Murrihy said that although recent catastrophes were due to horses breaking down, and not jockey error, an ongoing debate of safety practices is essential as “we should never be satisfied with the status quo."