Today, the city of New York lays claim to a single racecourse, Aqueduct, in operation since 1894. Little more than a century ago, however, the city boasted as many as seven courses. This article looks back to the golden age of racing in the Big Apple, with a review of some the lost racecourses of turn-of-the-century New York City.

Thoroughbred racing in New York City dates back as far as 1665, when Gov. Richard Nicolls built a large, oval turf track on the open flatlands of Long Island known as Hempstead Plain. This was not only the first regular racecourse to be laid out in the city; it was, moreover, the first in the country. Christened Newmarket after the celebrated British forerunner, for more than a century all New York society, from gentry to farmers, flocked there. It gave rise to many imitators.

For many years, racing in the city was an ad hoc, localised pastime. The Civil War, however, turned the sport upside down. Whilst the bitter conflict caused racing’s collapse in nearly all Southern states, in the North it became a flourishing industry, regional even national in its scope. And at its centre was New York City.

Fundamental to this were two factors: the emergence of a new breed of tremendously rich capitalists and a heightened appetite for pleasure and entertainment in the aftermath of the ordeal of war. Into the racing milieu stepped millionaires such as August Belmont and D.D. Withers, who poured vast sums into building top-class stables and a spate of racecourses. 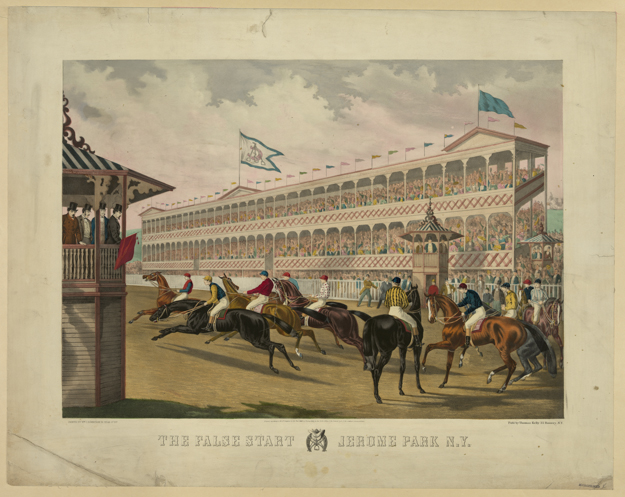 Jerome Park was the most important of the new tracks. Laid out on 100 hectares (250 acres) in Fordham, just north of Manhattan, it opened its doors in 1866 as the brainchild of avid horseman Leonard W. Jerome. Up until that time, racing had something of an ignominious reputation in much of American society. Jerome, however, saw it as his quest to ennoble the sport from a “rowdies’ outing” into a “royal sport,” and to fulfil this he funded the most lavish racecourse ever seen on U.S. soil.

It consisted of a two-storey timber grandstand, measuring 140 metres (460 feet) long and capable of holding 8,000, and, on a large hill opposite, a spacious clubhouse. Comparable to a luxury hotel, it included a ballroom, dining room, and even an art gallery.

“Driving and sleighing parties, trap shooting, skating and polo playing rendered the place a favourite tryst. Sleeping accommodations were plenty and it became quite the thing for an owner to take a party of friends to dinner, stop overnight and be up betimes to see the morning gallops.” noted a 1901 article in Outing magazine.

According to Outing, the clubhouse “soon became the great society rendezvous.”

Whilst racing in contemporary Britain and France, for instance, was an unmissable entry in the social season, Jerome Park vaulted this to a different level in New York. “Jerome Park on a raceday became a Mecca of fashion,” wrote Walter Vosburgh. Its principal raison d’être was not the cultivation of the sport, but the cultivation of society and, in turn, commerce. Its admission policies were exclusive; especially compared to most British courses where infield admittance was free, entrance tickets were expensive, since, together with pool privileges and concessions, they provided the bulk of the revenue that enabled the racecourse to sustain itself without large audiences. This rationale gave rise to the design approach of set-piece buildings and also the genesis of the clubhouse building type.

From the day of its opening, when an estimated 30,000 clamoured through its gates, Jerome Park was a success. In 1890, though, it was dealt a death blow when the city requisitioned the land to build a reservoir. Nonetheless, as The New York Times commented upon its inauguration in 1866, “as an event in the progress of the sport, it open[ed] an era.” It had helped to vault Thoroughbred racing to a new prominence amongst the metropolis’s pleasure seekers, so that by the last decade of the century, there were six courses running in and around New York City.

Such proximity inevitably bred competition, and the life expectancy of each course was not long. Securing the attention and patronage of the race-going public was imperative. Elegant settings and commodious buildings were one means of so doing, as consummately demonstrated at Morris Park Racecourse. 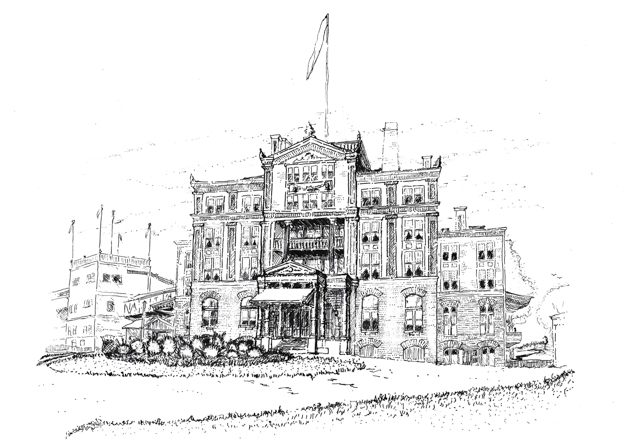 Morris Park opened its doors on Aug. 20, 1889, built as a result of the planned closure of Jerome Park. It was perhaps the first example in America of a consummately planned, architect-designed racecourse whose architecture and landscape was deliberately intended as a vantage over its competitors.

Its owner, John A. Morris, was a New Jersey businessman known widely as the “Lottery King” for his majority share in the Louisiana State Lottery. His chief ambition, it was said, was to own the finest Thoroughbred course in the world, and in 1888, he purchased 125 hectares (309 acres) in an area now part of the Bronx to make this a reality.

The track comprised a long grandstand, connected on its south elevation via an enclosed walkway to a spacious clubhouse. Five storeys tall, the clubhouse was a red brick and stone building.

“At Morris Park the race-goer has every chance to the greatest enjoyment from the ‘sport of kings,’ for all possible accommodations for his comfort are provided,” enthused Outing in 1892. “The club-house is not the mere cottage which generally answers the purpose, but a magnificent building, fitted throughout not with consummate luxury and good only money, but taste, every feature, from the ball-room down, being elaborated regardless of expense.”

The grandstand was longer and lower than the clubhouse, seating 8,000 on a single tier accessed from the lawn apron via nine broad stairways. It was a wooden structure built on a base of supporting stone, iron, and brick arches. It was a simpler, less stately edifice than the clubhouse, but still incited popular praise: “On opening day the public will find seats on a stand which surpasses those of Flemington, Ascot, Longchamps, or Buenos Ayres [sic], which have had, until this palatial structure came into being, the best in the world,” rhapsodised The New York Times.

The opulence and scale of Morris Park was demonstrative of the nature of American racecourses. Run by financiers and businessmen such as Jerome and Morris, the tracks were commercial enterprises that needed to turn a profit. They were built to be fashionable venues, whose clubhouses bustled with New York society.

Morris Park illustrated, though, that even the most luxurious tracks could become victims of that fashion. In 1904, following a decline in attendance caused at least in part by competition from other city racecourses, Morris Park closed its doors for the last time. 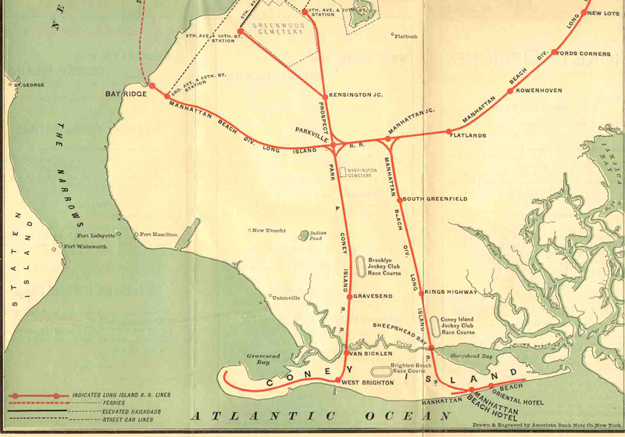 By the time of Morris Park’s closure, the cynosure of racing in New York City had transferred to Brooklyn. The first of Brooklyn’s three tracks, Brighton Beach, opened in 1879. From the outset, it was conceived to attract the crowds and reap a profit. It was built by William A. Engeman, an entrepreneur who bought several hundred acres of oceanfront property in Coney Island, which he named after the famous British seaside town and set about transforming it into a resort for New York crowds.

Not content with building only a pier, hotel, and bathing pavilion, Engeman decided that Brighton Beach also needed its own racecourse. In a little more than a month, with some 500 labourers working day and night, Engeman’s track opened on June 28, 1879. Two grandstands – capable of accommodating 13,000 racegoers – overlooked a mile-long track. 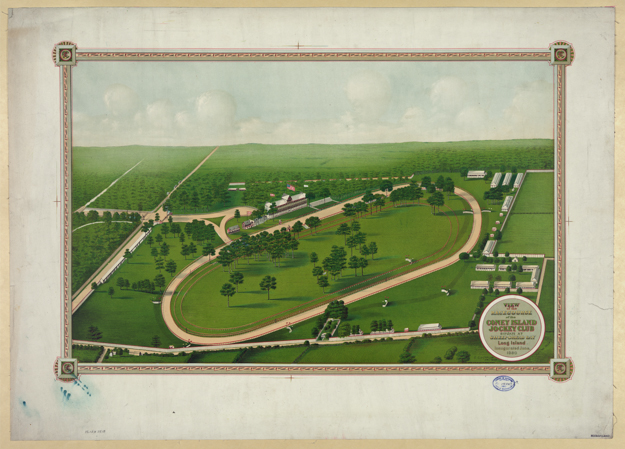 As Brighton Beach was taking shape, Leonard Jerome and other members of the American Jockey Club also recognised an opportunity in Coney Island. In 1879, some of the most powerful men in U.S. turf – including Jerome, August Belmont Jr, James R. Keene, A. Wright Stanford, and William R. Travers – banded to form the Coney Island Jockey Club and quickly announced the building of a new track in Sheepshead Bay. It opened in June 1880.

Thanks to the expertise, influence, and deep pockets of its founders, Sheepshead Bay was immediately successful. It drew the finest horses and horsemen, as well as high society and high bettors, and hosted two of the greatest fixtures of the era, the Suburban Handicap and the Futurity.

New York’s appetite for racing was still not sated, though. In 1886, brothers Phil and Mike Dwyer formed the Brooklyn Jockey Club, and began racing at the old Prospect Park trotting grounds in Gravesend. The Dwyers were businessmen, but they were also enthusiastic turfites. Their stable ranked amongst the best in the country, producing a Kentucky Derby winner and five Belmont Stakes victors.

The Gravesend Race Track opened on Aug. 26, 1886. Its physical environment did not compete with the glamour of many of its peers, but its running of the Preakness and Brooklyn Handicap drew audiences of tens of thousands.

Together, Gravesend, Sheepshead, and Brighton Beach became the biggest employer in Brooklyn. The tracks pioneered Monday-Saturday racing, beginning in spring at Gravesend and running until autumn, with racing alternating between the three venues. Racegoers were carried there by one of the most expansive railway systems in the country, running trains every 15 minutes.

Yet their popularity could not withstand the state prohibition of gambling in New York, decreed in 1910. The Agnew-Hart legislation closed every racecourse in the state. The Thoroughbred industry there collapsed, as trainers and horses were shipped overseas. Despite a reversal of the ban in 1913, Brighton Beach, Gravesend, and Sheepshead Bay never re-opened. The days of racing in Brooklyn were over, and the cynosure of New York turf settled permanently in Queens at the newer courses of Aqueduct and Jamaica, and in Long Island beyond the city boundaries at Belmont Park.

Several sources were used in the writing of this article, including: