When horses break from the gate for the 147th Belmont Stakes on Saturday, they will do so directly in front of tens of thousands of people, on their feet on the crowded apron and in the clubhouse and grandstand. They will circle the enormous Belmont oval, the only one of its kind in the United States, its mile-and-a-half circumference exactly the distance of the race, back to where they started, at a finish line that touches the western end of the grandstand, where it meets the clubhouse.

This is what Belmont Park and the Belmont Stakes are known for: that vast expanse, that testing distance.

It was not ever thus. The first running of the Belmont Stakes had nothing to do with Belmont Park. It wasn’t run over the iconic 12-furlong oval with which it has become so associated, and it wasn’t even run at a mile and a half. For the first 15 editions of the race after its arrival at Belmont Park, spectators couldn’t even see the start, or much of the contest at all.

The Belmont Stakes was inaugurated in 1867, but it wasn’t until 1926 — the 58th renewal of the race — that it became what we recognize today.

Born at Jerome Park in what is now the Bronx — and was then Westchester County — the race was named for August Belmont Sr., a noted Thoroughbred owner and breeder and a president of the American Jockey Club from 1886 to 1897. Though the Belmont Stakes was initially conceived to be run at 12 furlongs — its current distance — the peculiar layout of Jerome Park dictated that it be adjusted to 1 5/8 miles. 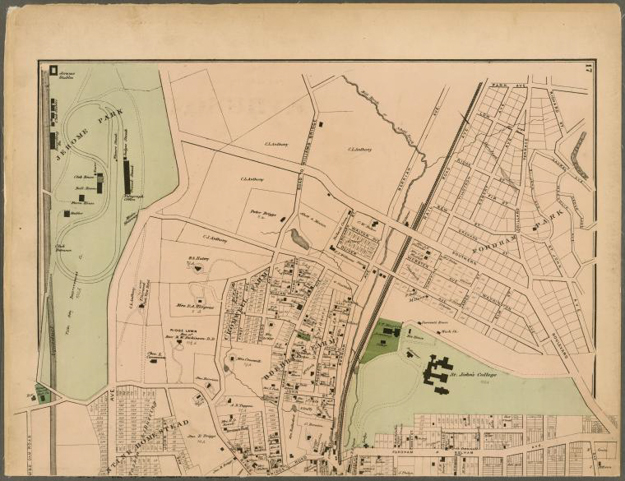 A high bluff sat in the middle of the track, resulting in the odd, almost figure-eight configuration of the racing surface; wrote W.S. Vosburgh in his 1922 History of the Belmont Stakes, “The plan was to have a race at a mile and a half, similar to the Epsom event, but this was found to be impracticable as owing to the high bluff upon which the clubhouse stood, the view of the spectators in the stand would be shut off, as the starting post was behind the bluff and hidden from view. Accordingly, the race was made one of a mile and five furlongs, the starting post being directly below the bluff and opposite the grandstand.”

And so it was for the first seven Belmonts, until a straight half-mile was added to the track and the distance was reduced by a furlong.

But that was only the first of multiple distance adjustments made to the race that’s become known as the “Test of the Champion.” It has been shortened and lengthened, run at 9, 10, 11, 12, and 13 furlongs. Sir Barton, recognized as the first winner of the Triple Crown (although the series wasn’t known by that name at the time), won the Belmont at 11 furlongs, shorter than this weekend’s race, over a Belmont Park course, described as a “shepherd’s crook” by the Daily Racing Form, that looks nearly ridiculous to contemporary eyes.

Sir Barton also had nearly a month off after the Preakness before he attempted the Belmont, running the former on May 14 — four days after he won the Kentucky Derby — and the latter on June 11.

Between the filly Ruthless’s inaugural Belmont Stakes victory and Sir Barton’s historic one, the race moved from Jerome Park to Morris Park, in 1890, the year in which August Belmont Sr. died. The race remained there until the opening of Belmont Park, established by Belmont’s son August Jr. in 1905, and at Belmont Park it has stayed — almost. For five years, 1963 to 1967, it was run at Aqueduct Racetrack while Belmont Park was renovated, and horses broke from the middle of what we’d call the final turn.

The first president of The Jockey Club, Belmont Jr. was a bold leader; he would go on to be credited with saving racing in New York after it shut down for nearly three years because of anti-gambling laws, and at his new racecourse, horses would not run in the conventional (on these shores) counter-clockwise direction. They would follow the English model and run clockwise, and the horses in the Belmont Stakes would go to the post on the training track, located directly to the east of the main track, leading a New York Times scribe to write in 1906 that the start was so far away that “the great majority of spectators hardly knew where to look for the horses.”

On the opening of Belmont Park a year earlier, the Times felt obliged to describe the horses’ route: “The race was run over the Belmont course, the start being made in the middle of the back stretch of the training track, and the horses, after making one turn on that course, coming on the main track and finishing down the regular stretch.”

The horses ran from right to left, finishing the race in front of a clubhouse located near what we now know as the top of the stretch.

Two years after Sir Barton’s Triple Crown, the Westchester Racing Association, which ran Belmont Park, abandoned both the distinctive configuration and direction of the Belmont, moving the entirety of the race to the main track and running counter-clockwise, though maintaining the 11-furlong distance at which it had been run since 1906. It was not until 1926 that the 12-furlong Belmont became the standard, and it’s been run at that distance ever since, with each of the subsequent 10 Triple Crown winners prevailing at a mile and a half, all at Belmont Park.

At this time of year, discussions of changing the Triple Crown appear as regularly as the call to the post — and get louder after each failed attempt at the elusive honor. Those who favor changing the series point to the lack of winners since 1978, the changes in breeding, racing, and training practices, the need for a Triple Crown to enliven what some see as an increasingly moribund sport. Those who want it to remain as it is talk about tradition, about the challenge, insisting that winning the Triple Crown is supposed to be hard.

Four tracks, five distances, two directions, a handful of configurations. In light of the Belmont Stakes’ tradition of modification, it is perhaps those who favor change that have history on their side.