France’s classic season gets underway on Thursday with two key trials at historic Maisons-Laffitte Racecourse, a track that is part of an equine paradise in the suburbs of Paris.

In theory, the Prix Djebel (for colts) and Prix Imprudence (for fillies), two 1,400-metre (seven furlong) contests recently upgraded to G3, are stepping stones to the two French Guineas on May 10, yet in practice they are at least as relevant as prep races for the English equivalents at Newmarket a week earlier.

That’s because the straight track at the Paris track has far more in common with Newmarket’s Rowley Mile racecourse than it does with neighbouring Longchamp, where the French classics are run.

As leading rider Olivier Peslier, who has won the Prix Djebel a record six times, explained: “The Djebel and Imprudence are very good trials for the English Guineas as they are never very tough races, and the track is the most similar to that of Newmarket, though the straight at Maisons-Laffitte is easier to ride. I love riding the straight at this track as it trains me up and gets me ready for the English Guineas.”

He added: “The straight track [has] no tricky bits. It is very flat and straightforward and the ground is always on the easy side due to the River Seine running alongside.”

Certainly the races have sound credentials as trials for both sets of classics. Style Vendome was the last colt to record the double in France (in 2013), while Elusive Wave achieved the same feat in the French fillies’ races in 2009.

But Djebel and Imprudence winners have also gone on to shine at Newmarket. Most recently, the colt Makfi followed up his Djebel win by taking the 2,000 Guineas in 2010. Natagora, who took the 1,000 Guineas two years earlier, had previously taken the Imprudence.

The two trials are among a number of important races that have attracted some of the best horses in the world to Maisons-Laffitte over the years, chief among them being Miesque and her son Kingmambo, Whipper, Le Havre, Moonlight Cloud, Twice Over, Dubai Millennium, and Nureyev.

The course, with 25 days’ racing each year and attendances of around 8,000 for weekend meetings, performs a vital role, yet the training centre alongside it is just as important for the French racing industry.

The training centre and racecourse of Maisons-Laffitte are owned by France Galop, just like Chantilly, Deauville, and Longchamp, and both are run by director Franck le Mestre.

“The park here in Maisons-Laffitte is a unique site and visitors are often surprised to see road signs warning them that horses have priority when they are just a few kilometres outside of Paris,” he said.

The training centre features 130 hectares of grass, sand and fibresand gallops, and over 110 schooling fences and hurdles. There are 52 trainers and permit holders in activity and, although the focus tends to be more on jumping, with trainers such as Jean-Paul Gallorini, Guy Cherel, and Yannick Fouin all based here, there are also many flat trainers, including Carlos Lerner and Didier Prod’homme.

Maisons-Laffitte is officially known as the Cité du Cheval (City of the Horse) and Veronique Bertran de Balanda, the wife of well-known trainer Jehan, is deputy mayor in charge of equestrian activities.

Le Mestre added: “The town is very much dedicated to the horse industry, and we do a lot to encourage and help foreign trainers set up yards here.

“We have many international runners at our meetings, and trainers such as Willie Mullins and Paul Nicholls also choose to base their horses here when they come to race in France to benefit from our facilities.”

Maisons-Laffitte is one of the few courses in the world that stages both left- and right-handed races. It also features a 2,000-metre straight track, making it the longest in Europe alongside Newmarket, and three different winning posts.

Olivier Peslier may find the straight track fairly straightforward, but he admitted that the round course is a different matter. “The round course can be trickier to ride, especially going right handed, as it is important not to stay close to the rail on the bends or you risk your horse slipping up,” he said.

Owners and trainers can benefit from the dedicated lounge on site as well as the panoramic restaurant, although many prefer to cross the road and have lunch on the terrace of the well-known Pur Sang restaurant and bar.

The racecourse is very popular with families who turn out in droves for racedays such as the Fête du Cheval (Festival of the Horse) and Déjeuner sur l’Herbe (Picnic on the Lawn), which feature attractions such as pony rides and live music. 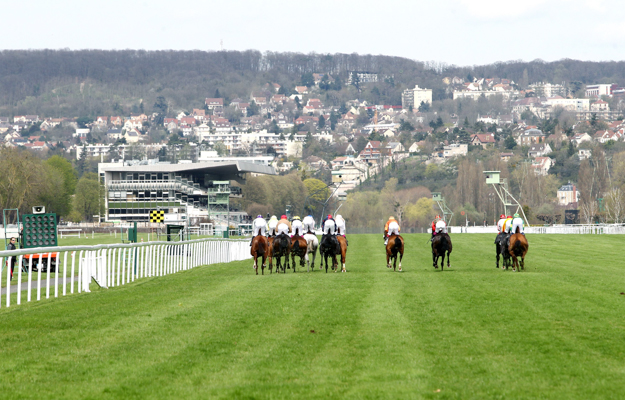 The racecourse is located in a wooded and tranquil parkland set over almost 420 hectares just 12 kilometres north-west of Paris. It is home to around 1,500 horses and ponies, 700 of which are racehorses.

The racecourse itself, which sits on 92 hectares on the edge of the Seine, dates back to 1878, although the relationship between the town and horses goes much further back than that.

The Count d’Artois, who was a brother of Louis XVI and passionate about horses, purchased the Chateau de Maisons in 1777 and restored the stables before importing Thoroughbreds from England. He then began racing those horses in the fields on the banks of the Seine.

From 1833, Jacques Laffitte organised racing at what was then known as Maisons sur Seine with the hope of creating a training centre similar to Newmarket. In 1850, Jacques Oller, who was at the head of the creation of the pari-mutuel system, purchased the fields on the banks of the river, and the racecourse and its grandstand was officially opened on June 6, 1878.

The original picturesque Anglo-Normand style buildings were replaced in 1970, when the racecourse was completely renovated with the aim of making it larger and the most modern at the time. Its grandstand and interiors are clearly identifiable by its ‘70s-style architecture, furniture and multiple escalators, which are seldom seen on French racecourses.

Both the racecourse and the training centre were threatened with closure less than 18 months ago under a cost-cutting plan being considered at France Galop, with the possibility of turning Maisons-Laffitte into a jumps track also on the table. Both proposals came to nothing after a storm of protest at the end of 2013.

Franck le Mestre said: “Maisons-Laffitte is a very popular racecourse with racing professionals, a point that was proven when they joined together to protest the threat of closure or turning it into a jumps track. The track is safe now and our main ambition is to have a Group 1 race at Maisons-Laffitte again.”

Even if that aim isn’t achieved anytime soon and there is no G1 at Maisons-Laffitte in the foreseeable future, it’s a fair bet there will be plenty of G1 horses in action there before long. One or more could certainly emerge on Thursday.