It’s Derby weekend in Europe, and that doesn’t just mean Saturday’s Investec Derby at Epsom. The following day, Chantilly stages the Qipco Prix du Jockey Club (French Derby), which has a prize fund nearly as big as the English classic’s. The French race, though, has struggled to maintain the same level of prestige as its UK counterpart in recent years, which is one of several points being addressed by France Galop. Here TRC’s man in Chantilly, John Gilmore, examines the issues.

1. Free entry: a bid to bring back the crowds

In a surprise move to increase spectator numbers for Sunday’s Qipco Prix du Jockey Club, France Galop is letting the public in to Chantilly racecourse free to all areas, apart from the Tribune Stand (which can be pre-booked online from €5 to €8 opposite the winning post).

Last year just 6,408 spectators turned up to watch Study Of Man and jockey Stephane Pasquier triumph for the Niarchos family. That’s a far cry from the days when it was the most important race on the French calendar and huge crowds packed the course.

Admittedly only a limited rail service was available last year between Paris’s Gare du Nord station and Chantilly because of strike action by workers on the national rail network SNCF, but as Prix du Jockey Club day attendance figures for the last seven years show here, the numbers haven’t been great for a while:

I can remember in the late 1980s, when I regularly travelled from London to see the race, stepping out of Chantilly station around midday, the area bustling with people and the Herlin pub/restaurant opposite doing a roaring trade. I used to lunch further down the road at the lively ‘Epsom’; others with fuller pockets frequented the world-famous ‘Tipperary’ in the centre of the town.

It is to France Galop’s credit that it has continued its popular family day policy for race meetings on Sundays and national holidays, with lots of activities for children. 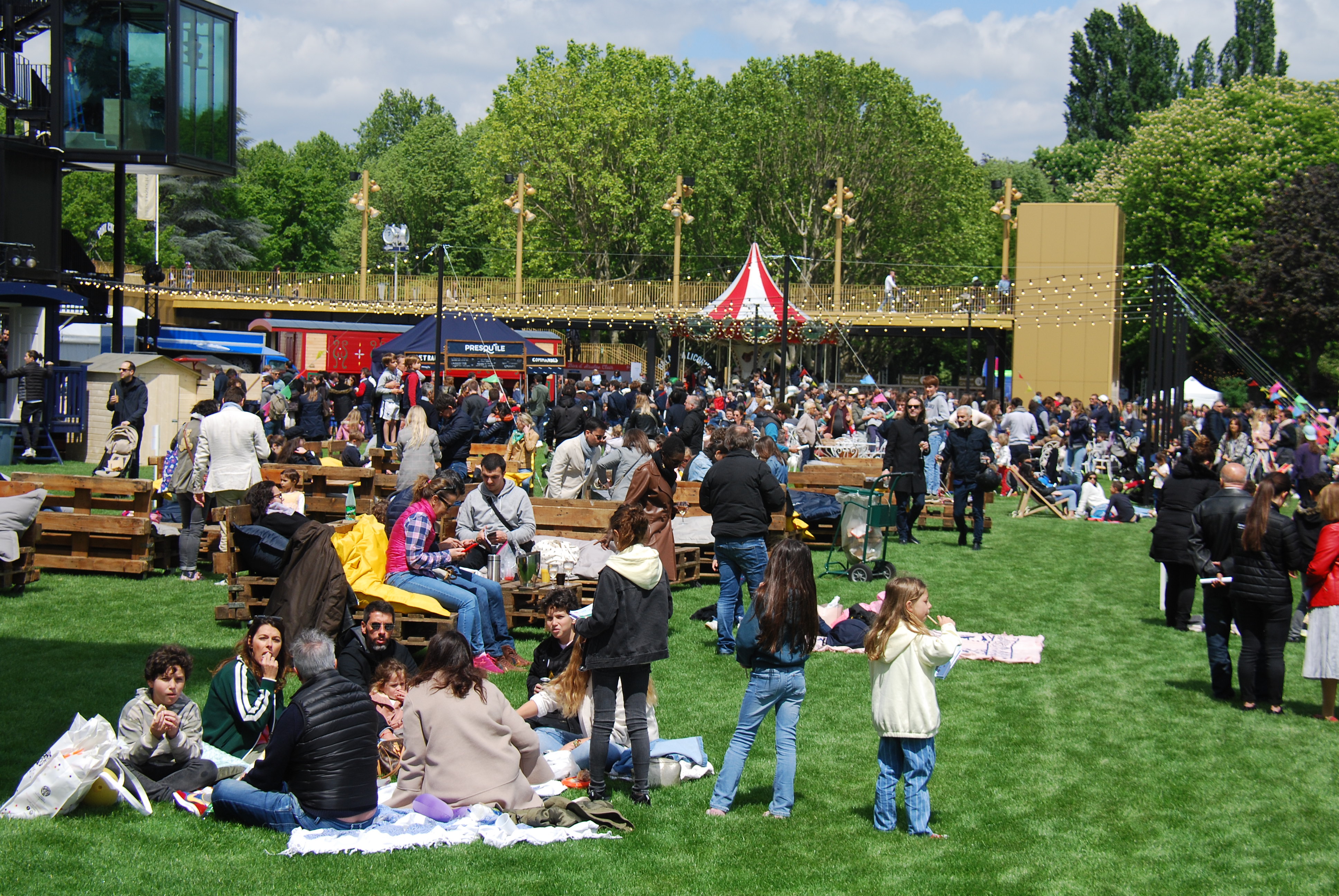 Introducing this policy under a free basis for a high-profile classic may prove to be a good long-term marketing move. Certainly, the day offers a lot of attractions for adults and children to learn about the world of racing, including aftercare for retired racehorses and veterinary services, and there is pony riding, a carousel and various games for children.

The weather outlook is for sunny weather all week, which should bring a lot of families to the track on Sunday.

2. In the shadow of the Diane

Unlike the Epsom Derby, which dwarfs the previous day’s Oaks in public appeal and industry prestige, the Jockey Club plays second fiddle to the Prix de Diane (French Oaks) these days.

The Diane, which is run two weeks later, has historic links to fashion and luxury and attracts around 30,000 spectators because of that. It is the place to be seen. So the roles have been reversed and the Diane has for a number of years become the more notable classic with the French public, when historically the opposite was always the case.

Indeed, the Diane's success has been endorsed on the track too - producing two outstanding recent champions who went on to win the Prix de l’Arc de Triomphe - Zarkava (2008) and Treve (2013 and 2014). The last Jockey Club winner to win the Arc was Dalakhani (2003).

3. The effect of the drop in distance

France Galop’s decision to reduce the distance of the Jockey Club from 2,400 metres to 2,100 metres has been successful in its aim to increase the number of runners.

Traditionally, the Epsom race, which is still over 2,400 metres, is the one every owner wants to win, even though the unique course that descends to Tattenham Corner and cambers away from the inside rail in the straight until the rising over the last 100 metres, is a demanding test and can be a possible source of injuries. This gives Chantilly a big advantage - it’s a beautiful fair galloping track, with less risk of injury to the horse, and of course as a shorter race it asks less of a horse’s stamina.

Many in the French breeding industry forecast the reduced distance would lead to fewer middle-distance horses being bred.

Has that happened? The jury is still out. Significantly, no Prix Du Jockey Club winner since the distance was reduced in 2005 has gone on to win the Arc (2,400 metres), although Hurricane Run, second to Shamardal in 2005, did triumph at Longchamp that October.

4. Does the Jockey Club look like an afterthought at the moment?

It seems odd to ask that question when the race’s total prize money is €1.5 million, which puts it almost on a par with the Epsom race (£1,625,000). But it could be argued that the Jockey Club suffers it terms of profile on the international calendar from being run just a day after the English Derby.

The Epsom race was traditionally run on the first Wednesday of June, but it was moved back to the Saturday in 1995. Perhaps changing the date of the Chantilly classic would help.

It seems hard to believe, but the Jockey Club was without a sponsor between 2008 and 2016, an astonishing situation for France’s premier classic, especially since Chantilly provides such a beautiful setting with its chateau backdrop, famous the world over.

Now Qipco is aboard, France Galop is anxious to keep the client happy by considerably increasing spectator numbers.

6. Things ain’t what they used to be

The mood in Chantilly has changed over the past 30 years, not only on major race days. There is no demand for the ‘Tipperary’ anymore - it is now a general restaurant called Georgio specializing in pizza. A famous bookshop in the centre of the town is now a brasserie called Vatel.

The renowned luxury shops in Chantilly and nearby Senlis and Gouvieux face stiff competition from the largest shopping complex in Europe at nearby St Maximin, as well of course from the internet.

However, the year-round tourists visiting the famous chateau and horse museum, plus the two classic races and various international events from June to November - including the annual Longines three-day Global Show Jumping Champion Tour in July, bring valuable revenue to the town for the shops, hotels and restaurants.

Since the end of the Second World War, the percentage of the town’s population in Chantilly working within racing has decreased. More and more people living here catch the train each day to work in Paris. The population of just under 11,000 is more than double what it was a century ago.

The shops have a poster promoting the Prix du Jockey Club on their windows, though it’s unlikely many members of the public would know the name of last year’s winner (Study Of Man) without looking it up. Fifty or 100 years ago everybody would have known. 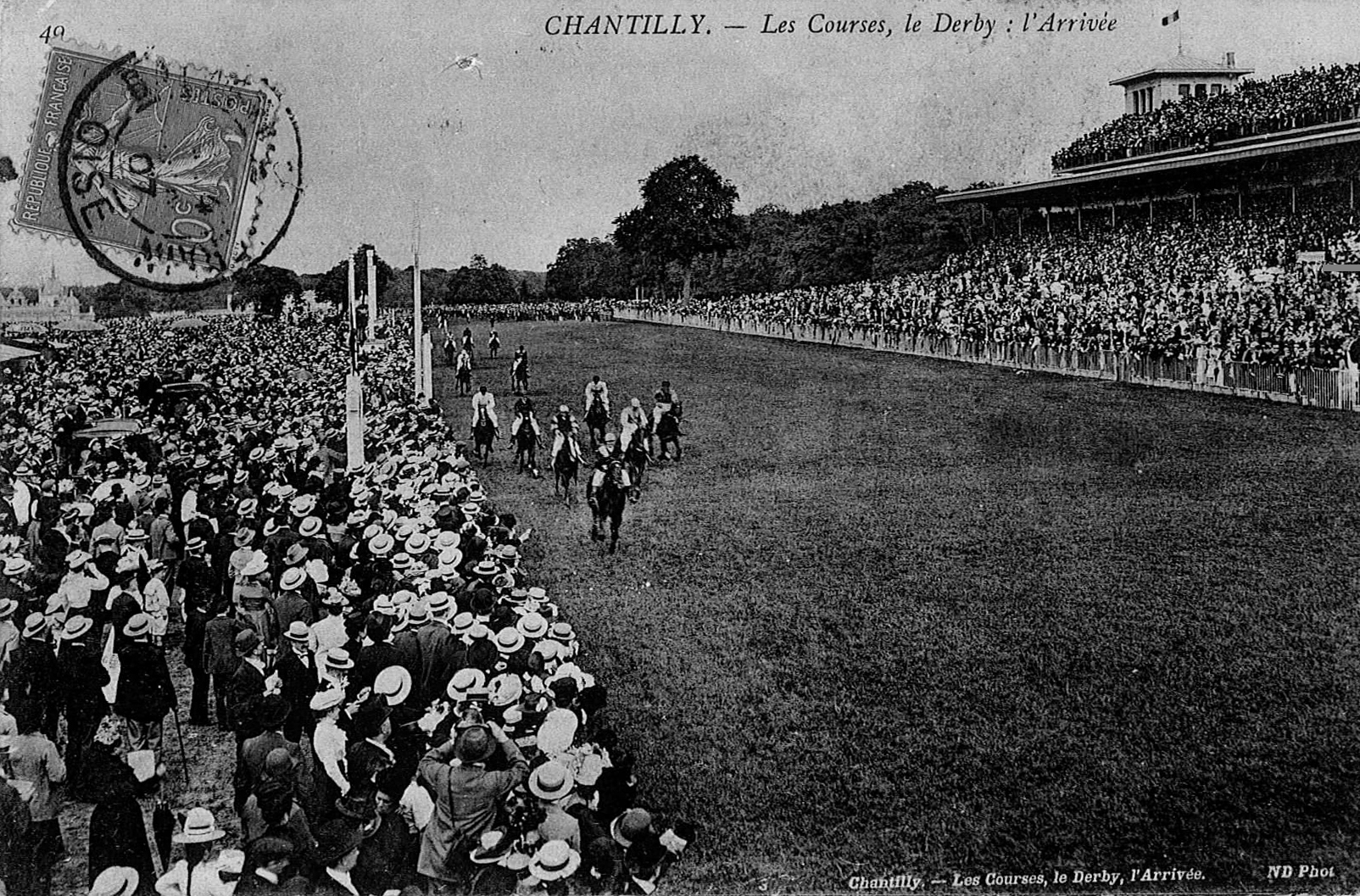 Over the years certain things have changed in Chantilly. The photo above shows a packed racecourse at the turn of the 20th century on Jockey Club day. This was the period of the Belle Époque (‘Beautiful Age’ - between the Franco-Prussian War of 1871 and the start of the First World War 43 years later), and in 1908 the famous Hotel du Condé was built with six floors and 100 luxury rooms. This was the place where the rich and famous came to stay for the season. George V was a regular visitor and the Duke of Windsor had a suite throughout the year.

From August 30, 1944, until the middle of 1945, the hotel was occupied by the 9th Division of the U.S. Air Force, which entertained the locals with baseball and American football matches and jazz nights. After the war, it was converted into flats. It stands to this day. 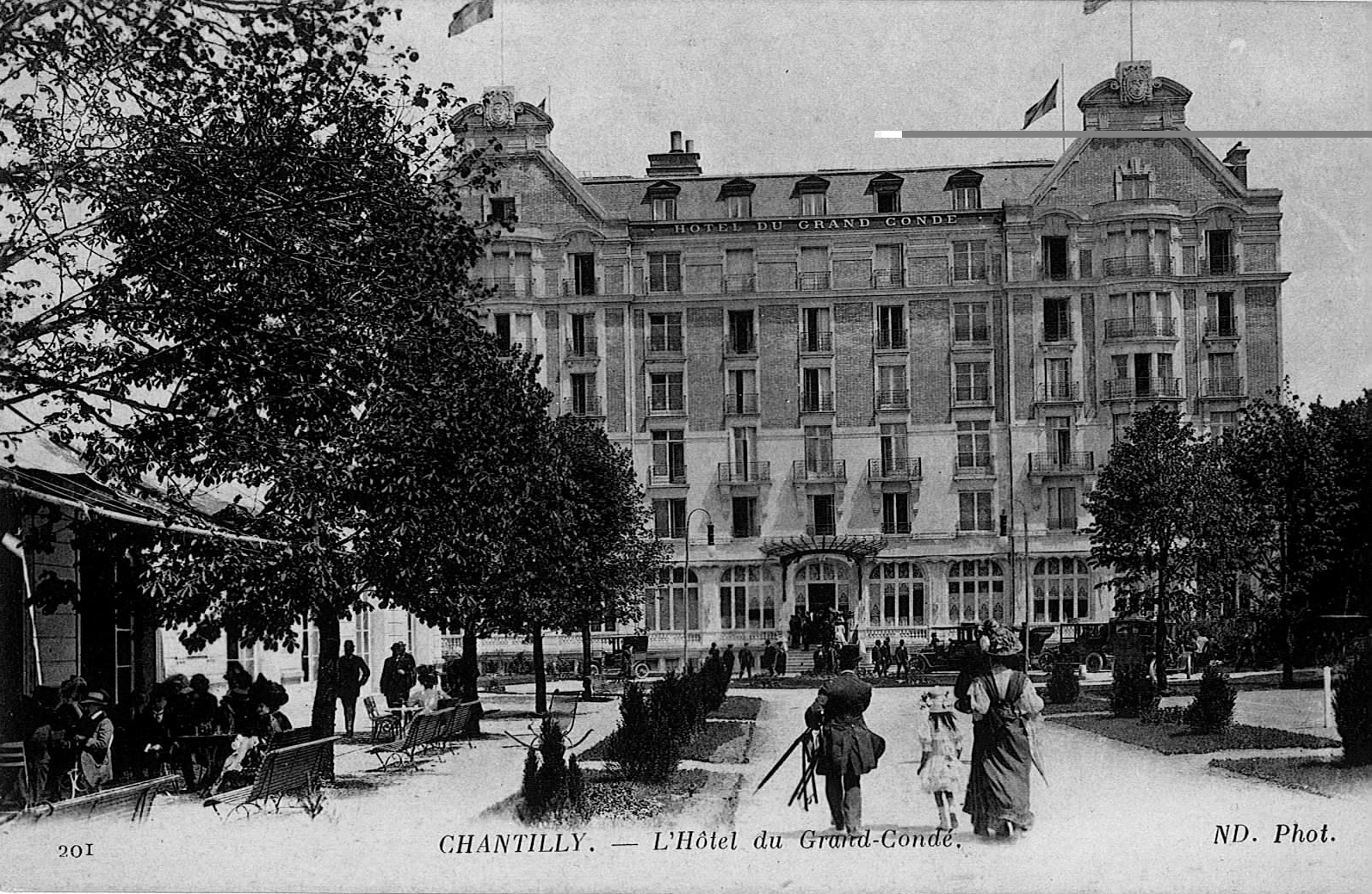 7. But there are compensations

The great thing about French racing is you get to see the trainers at the racetrack. There is no segregation of different areas as in England, and often French trainers will have a chat with members of the public as they pass, or even have their picture taken with them.

A big advantage of living in Chantilly for racing enthusiasts is France Galop’s offer for residents to pay just €10 a year to obtain an annual pass for Chantilly’s 42 race meetings on grass and Fibresand, compared to the normal price of €79. This includes free parking and entry for the Qipco Prix du Jockey club and Prix de Diane Longines. But sadly, a lot of the midweek meetings are poorly attended and, apart from those involved in racing, it’s mainly just retired people who go along - as others living in the area are too busy working.

8. Will we see a superstar on Sunday?

The challenge from Britain and Ireland may not be particularly strong this time, and the home team may hold the answer, particularly as it is led by the Poule d’Essai des Poulains (French 2000 Guineas) winner Persian King.

The Andre Fabre-trained colt is out to complete the Poulains-Jockey Club double, last achieved by Brametot two years ago. Ground conditions will be more favourable than when Persian King and jockey Pierre-Charles Boudot won the Poulains on heavy going. 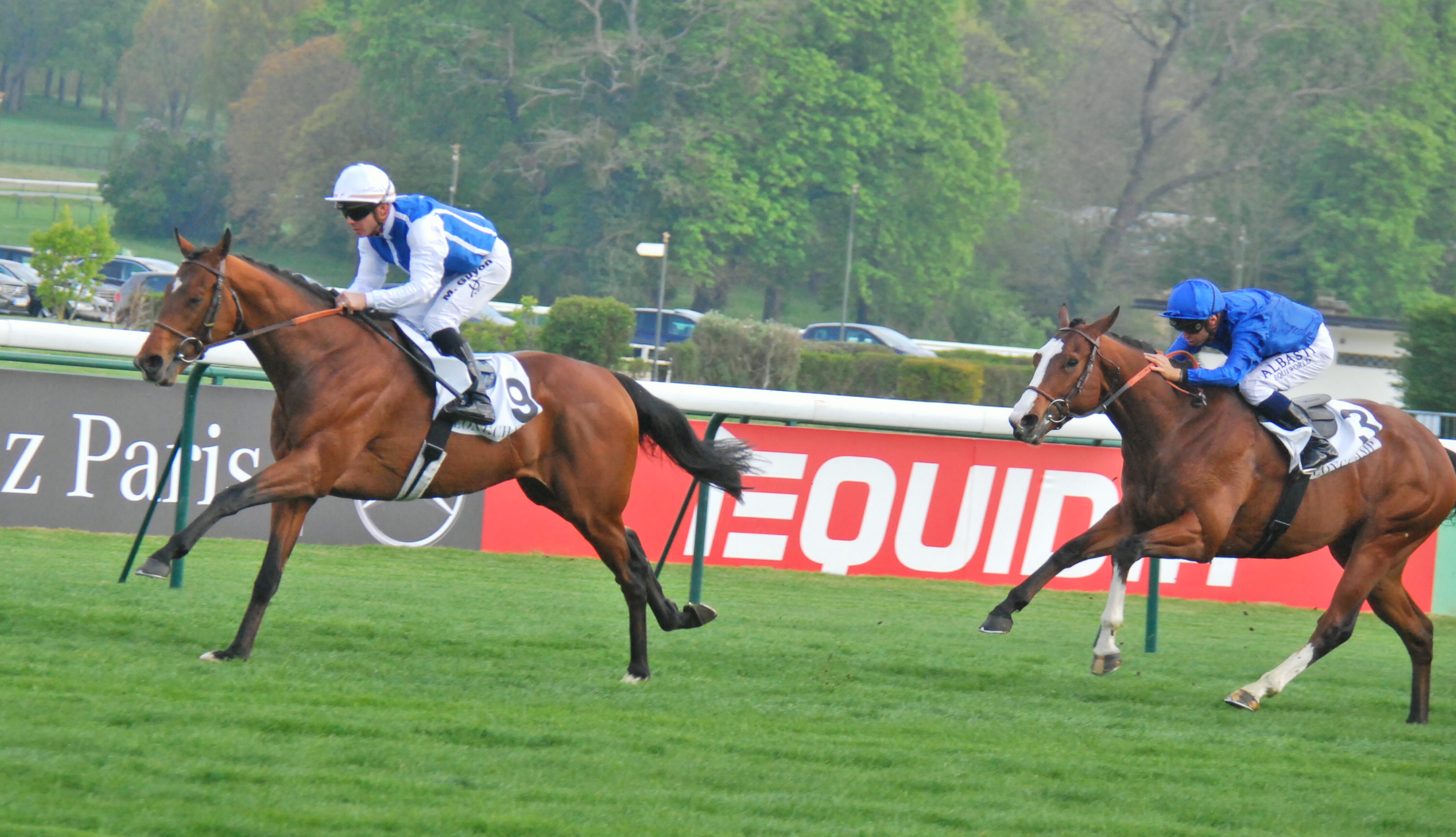 The big doubt is whether the colt, a son of specialist miler Kingman, will stay the extra 500 metres. If he does, he could turn out to be one of the stars of the season in Europe.

Fabre is also strongly represented by the Wertheimer brothers’ Slalom, a son of Intello, who easily won the G3 Prix Noailles over the Jockey Club distance at ParisLongchamp in April.