On the afternoon of May 3, a group of 20 3-year-olds will bid to join the illustrious cast of winners of America’s grandest race, the Kentucky Derby. In June 2012, Churchill Downs altered the qualification system for earning a spot in the Kentucky Derby. As is the case with most new initiatives in racing, the change was met with consternation from horseplayers, horsemen, and beyond. However, after two years, there are signs that the system is working well while altering the landscape of the Kentucky Derby trail.

When the new point system, officially dubbed the “Road to the Kentucky Derby” was announced, the goal, according to Churchill Downs Incorporated CEO Robert Evans, was for it to provide “greater stability, to represent historical relevancy and help to ensure the longstanding mission of assembling the finest group of three year-olds in the starting gate.”

Evans went on to say: “We want to maximize the quality of the Derby field and protect the integrity of the race.” In strongly incentivizing the “Kentucky Derby Championship Series,” races for 2-year-olds as well as 3-year-old races run in January and early February were rendered much less important. Those earlier qualifying races were dubbed “Kentucky Derby Prep Season,” a series that began with the Iroquois last September at Churchill Downs and ended with the Southwest Stakes in mid-February at Oaklawn Park.

The 2013 running of the Kentucky Derby was the first under the new system. The differences in the way participants were campaigned can be considered notable. For the first time in eight years, the winner of last year’s renewal ran three races as a 3-year-old prior to his victory. That horse, Orb, was a seven- race veteran heading into the Kentucky Derby. The runner-up, Golden Soul, had also run three prior times as a sophomore. The result marked the first time in 10 years that both the 1-2 finishers had made at least three prior starts as 3-year-olds. In total, 13 of the 19 entrants in the 2013 field had made at least three starts prior to their bid for the roses. This was an increase from 2012, when 10 of 20 starters had run at least three prior times that season. Of the top 20 healthy point earners this year, 17 have started at least three times as 3-year-olds, a sizable increase from just two years before.

Among the major changes that are being realized is the marginalization of 2-year-old racing. When qualification for the Kentucky Derby dealt solely with graded earnings, it was commonplace for an underachieving 3-year-old to take his place in the gate based on accomplishments from his juvenile campaign. The two most egregious examples of this in recent years were Homeboykris (2010) and Sabercat (2011). The former entered the Kentucky Derby with just two starts as a 3-year-old, the most recent of which was a defeat in an allowance race at Gulfstream Park 62 days beforehand. Sabercat was soundly defeated in his two starts leading up to the Kentucky Derby. Each benefited from having sufficient graded earnings as 2-year-olds, as they won the Champagne at Belmont Park and Delta Jackpot at Delta Downs, respectively.

Extraordinary circumstances seem to have limited the participation of the prior season’s top 2-year-olds each of the last two years. For example, the 1-2-3-4 finishers from the 2012 and 2013 Breeder’s Cup Juveniles did not participate. Moreover, the 2013 and 2014 Kentucky Derby fields included a grand total of four horses who had won graded stakes races as 2-year-olds. In comparison, the 2012 field featured eight participants who had won graded stakes as juveniles. Additionally, the participants slated to tangle in the 2014 Kentucky Derby made an average of 3.25 starts as 2-year-olds. That number was 4.15 in 2012, 4.35 in 2010, 4.11 in 2004, and 4.63 in 1996. These numbers notoriously ebb and flow, but a clear trend has developed. Even with the high attrition rate in the lead-up to the Derby, it stands to reason that less emphasis is being placed on getting potential top stock to the races early in their 2-year-old season. 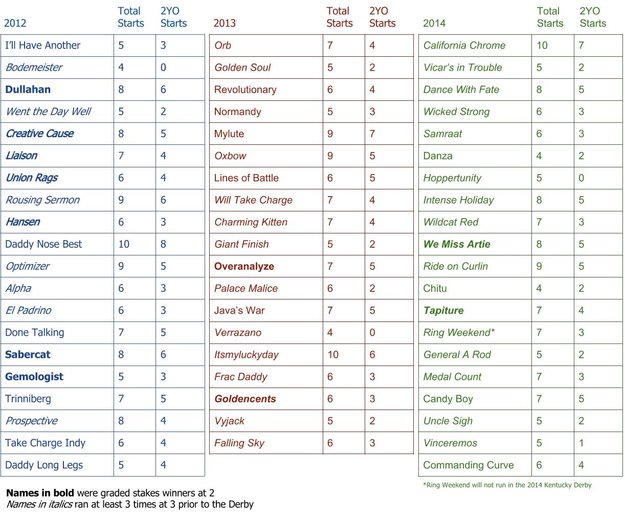 Is there a way to utilize the new system to one’s advantage? Perhaps, with the case in point being Ring Weekend. With a just a maiden win to his credit, the son of Tapit was given a try in the Tampa Bay Derby. He aced that test with a wire-to-wire victory and earned 50 Kentucky Derby qualifying points for the triumph. With the minimum number of points needed expected to be in the vicinity of 30, he had earned a spot in the starting gate. Trainer Graham Motion, who three years before won the Kentucky Derby with Animal Kingdom, sought the least taxing final prep available for Ring Weekend. Points were of no concern, so he was given a start in the Calder Derby, a race with no point value under the system. Ring Weekend was a non-threatening second at odds of 1-5, but could still participate in the Kentucky Derby courtesy of the points earned at Tampa Bay Downs.

Unfortunately, Ring Weekend was declared from the Derby with a fever on April 27, but he is the best example of occurrences that hearken back to the days of the graded earning system, where horses are simply asked to “go through the motions” en route to the Run for the Roses. Better to have one or two horses having an “easy” final prep, then a handful of horses undergoing entirely lackluster campaigns because their place in the starting gate had been secured.

As horseplayers and fans, are we better off with horses like Ring Weekend (and Commanding Curve, who could replace him in the starting gate on May 3), Harry’s Holiday, and Vinceremos in the field, even though the final two in that quartet were 13th and 14th in the Toyota Blue Grass? Both of those colts have finished in the top 3 of major prep races this year, with the latter winning the G3 Sam F. Davis at Tampa Bay Downs. The answer is an emphatic “yes.” The requirement that horses perform well in meaningful races as 3-year-olds is the signature element of the Kentucky Derby points system. Even if the new system continues on the current trend and takes its toll on major 2-year-old racing, it is accomplishing its goal of “protecting the integrity of the race” by ensuring, for the most part, a gate full of runners who have been forced to prove their worthiness of participation during their 3-year-old seasons.

Nick Tammaro is a racing analyst and columnist at SaratogaBets.com