The TRC Jockey of the Week selected herself this time when the talented Australian Kathy O’Hara became the first female to ride two Group/Graded stakes winners in the same week for nearly five years. The last women to ride such a double was the outstanding American Rosie Napravnik, but more of her later.

The 32-year-old O’Hara, long popular with the crowds on Sydney’s racetracks, was outstanding in the G3 Hong Kong Jockey Club JHB Carr Stakes at Randwick on Saturday on Godolphin’s Laburnam, a spare ride she picked up because of an injury to Glyn Schofield. O’Hara made a winning move when shooting the filly clear around 400 metres out, and the 10/1 chance held on by a nose as the pack closed too late.

O’Hara did it the other way round 35 minutes later, squeezing the 40/1 shot Grey Lion, a son of Galileo, between horses just before the 100-metre mark in the G3 Japan Racing Association Plate and running out an impressive length-and-a-quarter winner for trainer Matthew Smith.

The double means a ten-point gain in the TRC Global Rankings for O’Hara, making her the biggest gainer of the week across all four categories and elevating her 112 places in the worldwide standings to #201. She is now the joint third highest-ranked female rider in the world, behind fellow Aussies Lucy Warwick, who is based in Western Australia, and Jamie Kah, who rides mainly in Victoria. Another Victoria-based jockey, Linda Meech, is tied with O’Hara in third. 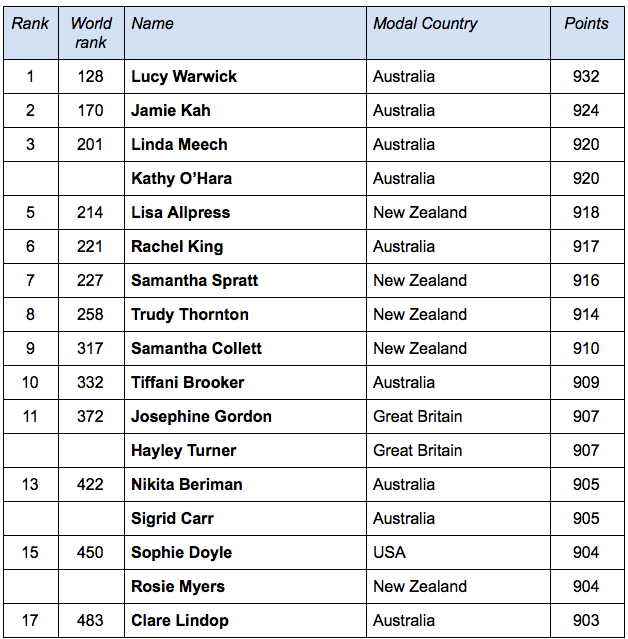 O’Hara becomes the first female to win a TRC Jockey of the Week award since we began the series last year.

She is also the first female to ride a Group/Graded stakes double since Rosie Napravnik achieved the same feat in the last week of October 2014. But O’Hara is still some way behind Napravnik, who has no less than EIGHT winning doubles to her credit in the period dating back to 2011 for which TRC has data. No other woman jockey has ridden more than one Group or Graded winner in a week during those eight years.

For all our data (2011-), there have been 732 riding doubles, 70 riding trebles and six four-timers. The four-timers were achieved by:

O’Hara is in a rich vein of form at the moment. She has won two G2s and two G3s in the last two months. But, as the graph below shows, she is still behind her rankings peak (#173 with 928 points), achieved during another hot streak in March 2016, highlighted by her G1 win aboard Single Gaze in the Vinery Stud Stakes at Rosehill. At the time she was the second highest ranked woman jockey in the world, just behind Melbourne-based Katelyn Mallyon, who is now retired. 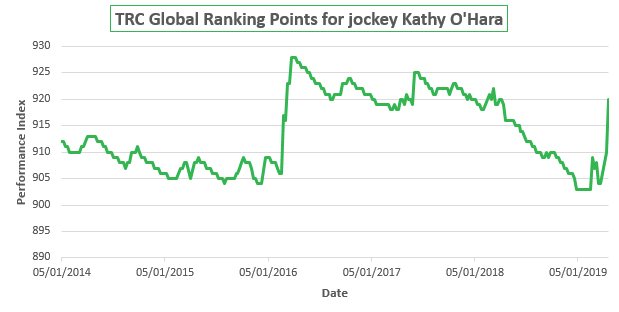 Napravnik retired at the end of 2014 after a relatively brief career that included two Breeders’ Cup and two U.S. classic victories (both in the Kentucky Oaks). Indeed, she may have retired five years ago, but she is still - at 31 - a year younger than O’Hara, who is hardly a veteran herself.

The first TRC Global Rankings are available only back to the start of 2014, and Napravnik peaked at world #12 that year. That puts her on a par with the likes of Javier Castellano, Flavien Prat, Irad Ortiz Jr and Joao Moreira, who are around that position in the current table. No other female has reached the top 100 since her retirement.

After the heady days of Napravnik, there is now just one North America-based female in the whole of the TRC top 500, and, ironically, she is a Briton - Sophie Doyle, sister of current world #17 James Doyle. However, the UK doesn’t have room to be particularly smug over that - the highest-ranked Briton in the table (and there are only three) is Rachel King, and she rides in Australia. 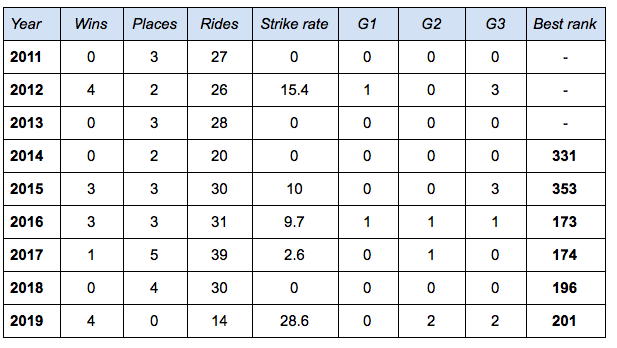