Before the world’s richest meeting on Saturday, there were strong hints that the Maktoums might be ready to replace Tapeta and bring back a dirt surface at Meydan, possibly in an effort to appeal to the Americans again. But after Saturday’s results, James Willoughby argues that U.S. horses are less relevant now and such a temptation should be resolutely resisted.

The 2014 Dubai World Cup meeting underlined that the powerbase of global racing has shifted. Two winners trained in Japan and two in Hong Kong merely highlighted a trend that is evident from a wider sweep of results in the most important races.

The global year of racing 2009 was the final one in which the World Cup took place on dirt at Nad Al Sheba Racecourse. Since the inaugural World Cup in 1996, a parade of U.S.-trained dirt stars had solidified the early reputation of the richly endowed race as a significant and novel landmark on the global racing map. Cigar, Silver Charm, Captain Steve, Street Cry, Pleasantly Perfect, Roses in May, Invasor, and Curlin provided some electric moments as they stormed down the straight in a manner befitting the concept of a world champion.

U.S. racing was relatively healthy in this period, so it was a surprise to many – the author included – when the announcement was made that the new Meydan Racecourse would feature a synthetic track instead of dirt. Former trainer Michael Dickinson’s Tapeta surface – billed as “a magical carpet ride” – was the chosen formula. It was obvious that this would act as a disincentive for connections of U.S. dirt stars to send their horses to Dubai, and it seemed like the Maktoum family was gambling on a different pool of horses picking up the slack.

With the exception of 2013 winner Animal Kingdom, it is fair to say that the Meydan World Cup winners seem to resonate far less with the name of the race in the estimations of the racing public. Gloria de Campeao, Victoire Pisa, Monterosso, and this year, African Story are horses perceived as gaining too big an advantage from their suitability to the surface, with the jockeys and trainers of beaten horses quick to pin the underperformance of their charges on the nature of the track.

This kind of groupthink – so familiar to any rational observer of the sport – gained fresh and potentially decisive momentum when Sheikh Hamdan bin Rashid Al Maktoum actually doubted the reliability of the Tapeta surface before his horse Mukhadram had run in the latest World Cup, citing concerns over the variance in its speed according to temperature and the difficulty of habituation for grass-based horses.

In the case of Mukhadram, Sheikh Hamdan’s fears proved groundless as the 122-rated 5-year-old ran up to his mark on his first taste of the surface, having no difficulty in gaining traction early as he bounded to the lead. Of course, for some of the horses who finished up the track, blaming the surface proved irresistible.

If the Sheikh’s comments indicate an impending decision to rip up the Tapeta – as so many seem to have inferred – then the Maktoum family could be making another mistake. Since the decision was first made to install Tapeta, the global powerbase of racing looks to have shifted.

The chart here displays the number of horses by country recording a rating of 117 or above in the annual Longines World’s Best Racehorses classifications in the period 2009-2013. 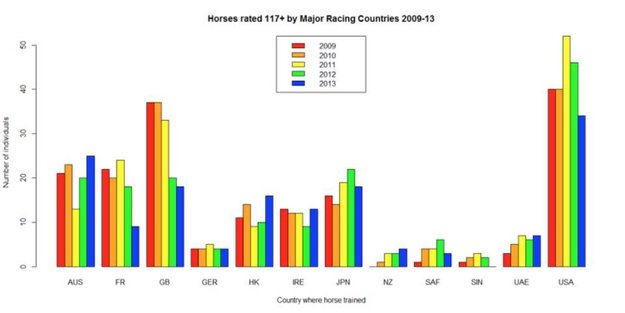 The coloured bars in the chart show an obvious growth in the number of 117+ horses trained in Japan and Hong Kong, and a decline in the corresponding number in the U.S. It is always important to state the limitations of any statistical analysis, and while this definitely constitutes a trend – remember that these numbers are drawn from a period before Far Eastern-trained horses dominated World Cup night – it is not possible to be confident about its extrapolation throughout the next 10 years. Still, bloodstock economists have been predicting a surge in the fortunes of horses from this part of the world for some time.

Beyond the cause-and-effect of money, bloodlines, or whatever may be driving the numbers, there is a less concrete, but no-less-important factor: enthusiasm. Racing in the Far East generates the kind of public clamour that no longer exists in countries such as Britain and the U.S. Sure, those of us actually involved in racing in the West love it with a passion, but the sport just doesn’t have the kind of public reach that saw more than 60,000 people stay on after racing at Nakayama to pay tribute to retiring legend Orfevre.

The scenes at Meydan that followed Just A Way and Gentildonna’s victories were arguably the best the meeting had seen since Dubai Millennium won the renewal for which he was named. Just A Way cemented himself as just about the best horse on the planet with his six-length romp in the G1 Dubai Duty Free, while the 2013 Japan Cup winner Gentildonna emerged triumphant from the kind of brawl she seems to relish in the G1 Sheema Classic.

It is surely from this pool of horses that the Dubai World Cup meeting is likely to draw its future stars. As Chris Smith pointed out in his analysis of the $5 million Dubai Duty Free, it may now be a false hope trying to attract U.S. horses to Dubai in significant numbers, whatever the financial reward. And, even if returning the World Cup to dirt might prove magnetic, at what cost to the other stars of global racing from the East?

Yes, Japanese bloodlines are in many cases drawn from imported U.S. stallions – notably the 1989 Breeders’ Cup Classic winner Sunday Silence. But racing on dirt in Japan is still the less important relation of turf, notwithstanding top races such as the one formerly known as the Japan Cup Dirt, to which changes have been made in 2014 reportedly due to lack of international interest. In any case, the 2010 and 2011 winner Transcend had no problems adapting to Tapeta when running second to compatriot Victoire Pisa in the 2011 World Cup.

Chasing the ghosts of Cigar and Silver Charm by returning the World Cup to dirt would be a poor move by the Maktoum family. It would be the very antithesis of the visionary outlook that is supposed to inform their decisions. Tapeta may have the problems that Sheikh Hamdan cites, but surface inconsistencies are not unique to synthetic tracks, nor to Dubai. Those who remember the quagmire of the 2007 Breeders' Cup at Monmouth Park understand that dirt tracks can be seriously affected by extreme weather.

Speaking personally, I am a huge fan of American racing – my study is festooned with pictures of Affirmed and Alydar - but right now, I would rather watch Just A Way and Gentildonna than Mucho Macho Man, thanks very much. Don’t try to go back to the future, Sheikh Mohammed, prove you really can be independent of groupthink. Stick with synthetics and tap into the real coming force of global racing: the magnificent beasts of the East.