At this time of year, the international racing calendar is crowded with rich meetings. There is the Arc in France, Champions Day in England, and the Breeders’ Cup in the U.S. With each vying for the world’s best gallopers, Australia’s Cox Plate has thrown its hat into the ring, and has been rewarded this year with Ballydoyle’s globetrotting Adelaide. Trent Masenhelder looks at the race that is Australia’s weight-for-age championship, and assesses its place on the busy world stage.

The Cox Plate is considered Australia’s weight-for-age championship, a G1 race over 2,040 metres for horses 3 years and older. Scheduled this year for Oct. 25, it is one of the three big races of Melbourne’s internationally renowned spring racing carnival, and, given the Melbourne Cup is run under handicap conditions, many Australians even argue that it is a greater event than “the race that stops a nation.”

It is held at Moonee Valley Racecourse each October, sandwiched between the Caulfield and Melbourne cups, and the unique nature of Moonee Valley, or “The Valley” as locals call it, is one of the distinct characters in the race’s profile. The track boasts a natural amphitheater environment that creates an electrifying atmosphere on race day. It is doubtless one of the most unusual racing venues in the world with its roughly rectangular, tight-turning course, featuring a finishing straight of just 173 metres, the shortest in metropolitan Australia.

The Cox Plate carries a total prize purse of AUD$3,050,000, the third richest race in Australia behind the Melbourne Cup and Randwick’s Queen Elizabeth Stakes. It was first run in 1922, and since then, some of the all-time greats have won the “race where legends are made,” including Phar Lap, Kingston Town, Rising Fast, Might And Power, Sunline, Northerly, and Makybe Diva.

Surprisingly, though, at a time of year when Australia is flooded with international raiders, the race has failed to capture the imagination of the big guns from overseas. The Cox Plate has featured just 14 international runners since 1999, none being able to land the prize. Godolphin’s champion Grandera is the lone international entrant to have filled a top-three position, coming third when he tackled the race in 2002.

It’s a vastly different story when looking at the Melbourne Cup. During the same period (1999 to current), 91 internationals have lined up in the world’s richest and most prestigious two-mile handicap, including almost half the field (11 of 23 runners) in 2011. Ever since the Dermot Weld-trained Vintage Crop took out the 1993 edition, and Weld again was victorious in 2002 with Media Puzzle, the Melbourne Cup has become a truly international race. Since then, the Japanese and French have saluted with such horses as Delta Blues, Americain, and Dunaden.

The third of Australia’s “big three” races, the Caulfield Cup, has boasted 31 international runners since 1999, with two of them victorious. Godolphin’s All The Good was a surprise winner in 2008, while Dunaden won the race in 2012, backing up his Melbourne Cup victory of 2011.

With such strong patronage for the two handicaps, why then has there been a lack of interest from, and success for, the internationals when it comes to the Cox Plate?

One theory is that connections are reluctant to travel so far given the uncertainty of how their charge will perform at Moonee Valley’s unique circuit. With its distinctive, tight-turning shape, many a good horse has failed to fire around The Valley.

“I’m sure the different racing styles of certain horses means that Moonee Valley wouldn’t be suited to all of them,” said Michael Browell, CEO of the Moonee Valley Racing Club (MVRC). “It is unique. I wouldn’t say it’s the number one barrier, but it’s obviously been some of the feedback we’ve had in the past.”

Another explanation is that the Cox Plate sits alongside a host of feature races on the international stage. In early October, Longchamp is home to the time-honored Prix de l’Arc de Triomphe weekend, where 13 group races are up for grabs. A fortnight later, British Champions Day, the culmination of the European flat racing season and the richest race day on the British calendar, takes places at Ascot. There is also the Breeders’ Cup meeting in America soon after.

“The challenge we have now is that the calendar is really starting to fill up with these major overseas carnivals,” Browell said. “The Prix de l'Arc de Triomphe is probably the toughest race for us to compete against, and then you’ve got the Breeders’ Cup. At that time of the year, it’s a very busy schedule, and obviously when they’ve got those high-profile options close to home, it is difficult to make the decision to send their horses across to Australia.”

When measuring the level of international interest in the Cox Plate, Greg Carpenter, general manager and chief handicapper at Racing Victoria, claims that comparing the race to the Melbourne Cup is unfair, insisting it’s not apples for apples.

“Everyone looks at the success of the Melbourne Cup in getting international runners, but they forget the Cup stands alone on the world stage as a race over 3,200 metres worth AUD$6 million,” he said. “It has no competitor in that space, and therefore, internationals are prepared to endure the challenges of travel and quarantine restrictions in Australia to compete in a race that they cannot access anywhere else in the world. And they pay for the privilege. It is an enormously costly exercise to travel a horse to Australia.”

Carpenter said the Cox Plate has always been in competition with a number of 2,000-metre races on the world stage, in jurisdictions where expenses have been paid for visiting competitors.

“The MVRC have made a decision over the last two years to offer invitations for world-class horses to compete in the race, and they pay the expenses involved in getting them here,” he said. “They have been rewarded this year with Adelaide and Dan Excel both travelling to compete in the Cox Plate. The race will never get the same level of international competition that the Melbourne Cup does, but it has made significant steps forward in the last two years in making it an international race.”

Hong Kong visitor Dan Excel has since been scratched from the race with a throat abnormality, but this year’s Cox Plate will nevertheless feature a star-studded line-up, with a number of high-quality internationals due to take part, including Adelaide, Farraaj, and Guest Of Honour. It is also possible that British visitor Side Glance, who ran third in the Caulfield Stakes recently, will take his place in the field. But it is the inclusion of Ballydoyle’s Adelaide that has proved the most interesting feature of this year’s race, because it will be top trainer Aidan O’Brien’s first Australian visit since 2008, while Adelaide, a son of Galileo and a winner of three of his seven starts, was hugely impressive in taking out the G1 Secretariat Stakes at Arlington in August. At his most recent outing, in the G2 Prix Niel at Longchamp, he was unlucky when running third behind Ectot, but, like former Ballydoylers Treasure Beach and St Nicholas Abbey, he has shown globetrotting talent. Also, a 50 percent stake in the horse was sold to Australian interests earlier this year. 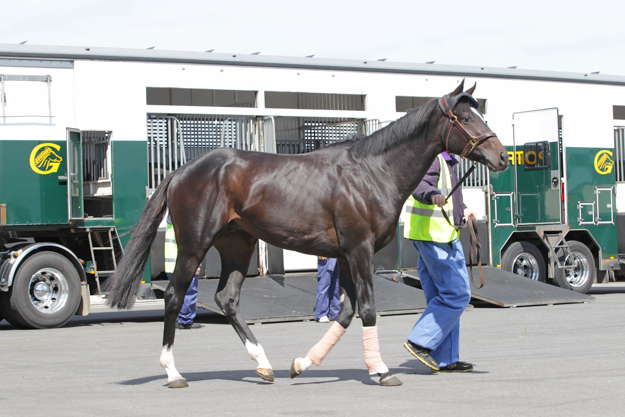 “This is the third year of invitations, and it was terrific to pick up Dan Excel on the back of his win in the Singapore International Airlines Cup,” Browell said. “And to have Australian connections purchase a 50 percent share in Adelaide, who we’re told rates as the second best horse in the Coolmore yard across in Ireland, we see that as a huge tick for our race and our international strategy.”

It is fair to say that should Adelaide or one of the other overseas raiders etch their name into Cox Plate folklore, just as Vintage Crop did at Flemington 20 years ago, there may well be an influx of internationals in years to come. As the Melbourne Cup has in recent history, the Cox Plate, too, is evolving. 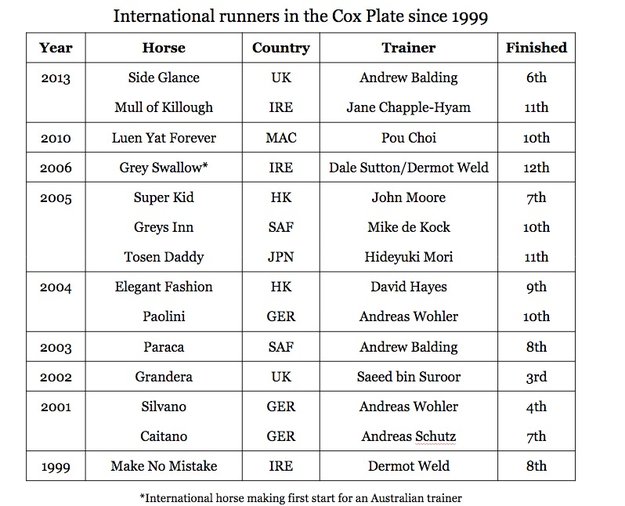