The Group 1 King George VI and Queen Elizabeth Stakes at Ascot on Saturday is known as ‘the clash of the generations’ because it regularly pits the best 3-year-old colts and fillies in Europe against the cream of the older horses.

This is only possible because of the device of ‘weight-for-age’ in horse racing – an allowance supposed to compensate younger horses for their immaturity.

The question of whether these allowances are too generous has arisen many times over the years, with the result that the original scale – devised by British Royal Navy officer Henry Rous in the 1850s – has been revised downwards of several occasions in Britain, the latest such occasion being last year.

Weight-for-age allowances vary across the world, and 3-year-olds in general exploit them.

As usual here, we present win rates using a more robust measure than SR. Impact Value (IV) dominates SR because it accounts for the size of the field. A 10 percent strike rate in 20-runner races is, after all, twice as good as one in 10-runner races. IV – a ratio – rates these two performance-levels 2.00 and 1.00 respectively. Here, 2.00 implies twice the rate of random chance.

Let’s look at the performance of 3-year-olds against older horses (4-year-olds and upwards, grouped together) in various situations, starting with overall,

Three-year-olds have outperformed older horses by a wide margin in all-aged clashes around the globe since 2011.

No doubt this is some function of both selection bias (better 3-year-olds take on older horses sooner) and survivorship bias (some of the best horses are retired to stud or injured). However, as we will see, there are systematic biases in the performance of 3-year-olds that make it clear that the allowances, in general, have been too easy to exploit. 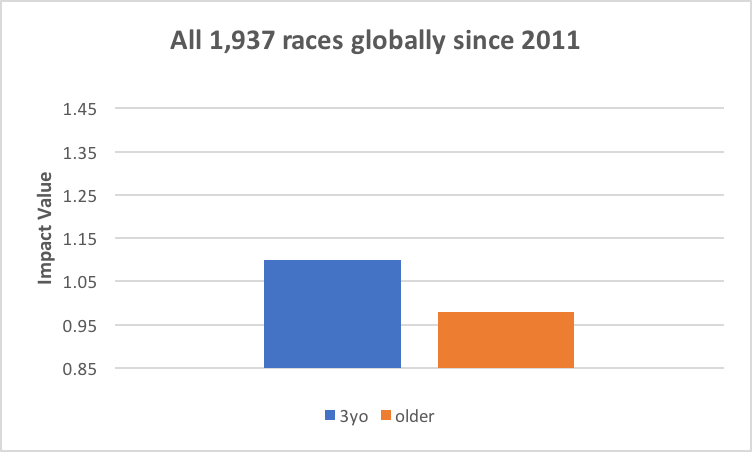 The greater the allowance, the higher the rate 3-year-olds tend to win. Larger allowances are received earlier in the year and over longer distances. We will break down both these factors in the next few graphs. Note that all bar plots have the same vertical scale. 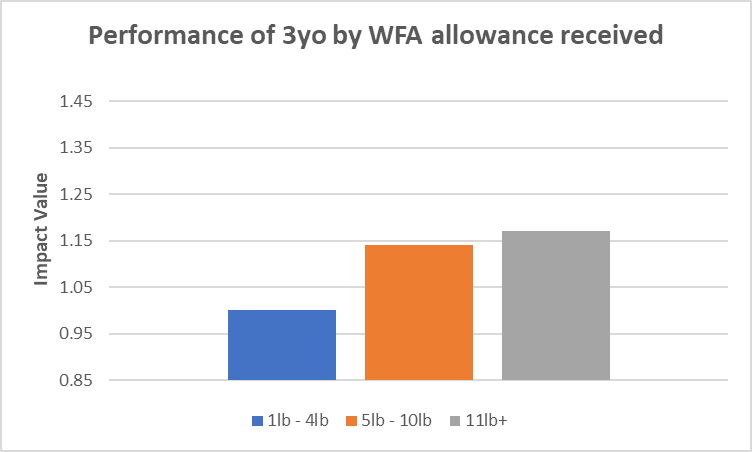 By time of year 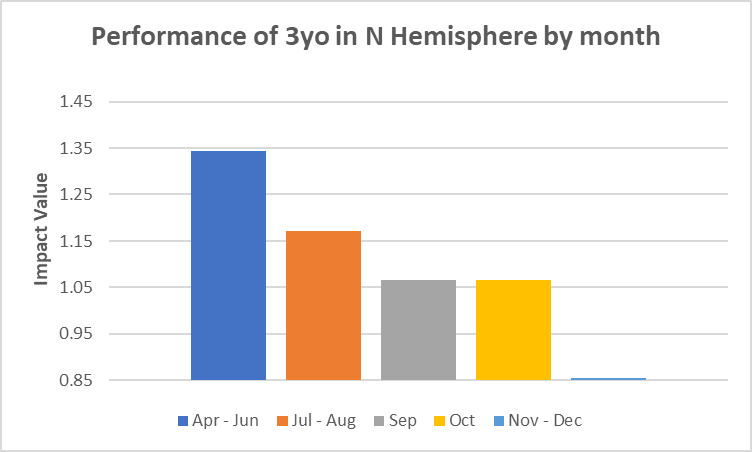 Three-year-olds beat older horses at the highest rate on dirt, compared with turf and synthetic surfaces.

This is clearly a function of selection bias: go back to the start of the article and see that 14,109 older horses are in the sample of all races compared with 5,174 – a factor of 2.7. But the sample of dirt races only has 2,340 (not shown) to 753 3-year-olds – a factor of 3.1. So, trainers in the U.S. are more circumspect about pitching 3-year-olds against their seniors. (There is also a higher rate of attrition on dirt.) 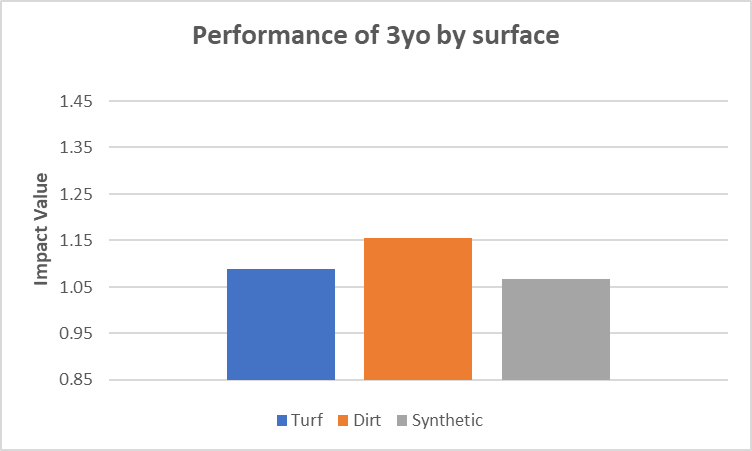 The study of weight-for-age presented here is so heavily affected by one type or another of sampling bias that we are required to stop short of asserting that weight-for-age allowances are definitively too generous across the globe. However, it is fair to say that they are readily exploited.

However, this is refuted by the success rate of 3-year-olds actually declining across the year, as the allowance they receive gradually decays.

It seems likely that, sampling bias or not, the systematic nature of the success rates of 3-year-olds provides evidence that 3-year-olds are simply more precocious nowadays than the scale suggests, and the greater the allowance they receive, the higher the rate at which they exploit the system.

The British Horseracing Authority’s impressive report on weight-for-age led to small changes (1lb to 3lb) across the board for the 2017 season. It was wrongly asserted in some quarters that these changes were insufficient, but in fact their effect is likely to bring the rate at 3-year-olds and older horses into line proportionate with the evidence.

In the G1 Coral-Eclipse Stakes at Sandown in July, 3-year-old Barney Roy lost by a nose to 4-year-old Ulysses, the latter conceding 1lb less than he would have been had the scale not been revised.

It is highly important for the sport that 3-year-olds do not win G1 races at any higher rates than is reasonable, for this can hasten their departure to stud.

As we have observed, one should expect the success rate of 3-year-olds to be always somewhat higher than older horses, while the ranks of the latter are denuded by retirements and injuries. Nevertheless, it behoves the sport globally to monitor the efficacy of weight-for-age allowances closely.