Six thousand miles apart, two countries ran their top races over a mile and a quarter last week. And one stallion provided the link between them.

A son of the top-class British miler Observatory, TWICE OVER (+5pts, #82 from #102) won the 2010 G1 Eclipse Stakes at Sandown Park in 2010 when trained by the late, great Sir Henry Cecil. (This year’s Eclipse was won by Enable last Saturday.) A 5-year-old then, Twice Over stayed in training for two more seasons before being sent to South Africa.

Twice Over stands at Klawervlei Stud, near Cape Town. He is responsible for three winners that count towards our rankings: Doublemint, winner of the G3 Winter Derby at Kenilworth, Sand And Sea, winner of the G1 Gold Medallion at Scottsville, and the best of them, Do It Again.

Last week, Twice Over’s son provided the link between the Eclipse and South Africa’s greatest race when he won a second G1 Durban July at Greyville. His other two counting wins are the G1 Queen’s Plate at Kenilworth and the G1 Gold Challenge at Greyville. 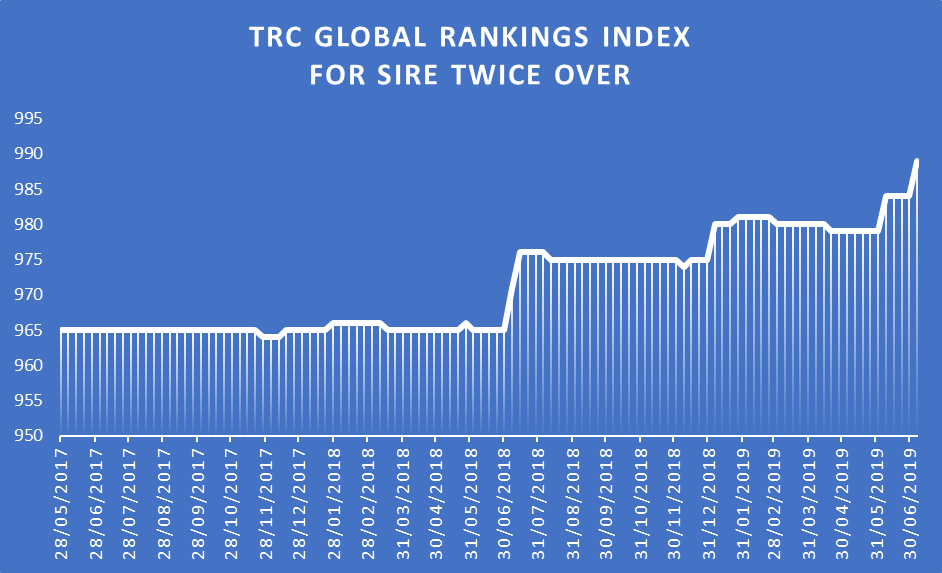 The impact of Do It Again’s first Durban July can be seen from the upward surge over the date of the rankings released a year ago. This would not be enough to explain his surge to the verge of the world top 80 this week, however.

In total, Twice Over has sired nine other horses who have been placed in 25 counting Group races, all in South Africa, winning six of them (24%).

There are two stallions with modal country ‘South Africa’ currently ranked ahead of Twice Over, Captain Al (+4pts, #21 from #26) and Dynasty (+6pts, #74 from #89). The former struck with G1 Garden Province winner Celtic Sea, while the latter was on target with G3 Betting World 2200 scorer Shenanigans, both also at Greyville.

The 32 races added to TRC Global Rankings this week were won by 32 different sires. World #1 Dubawi had a 1-2 in the G1 Prix Jean Prat.