He’s perhaps the world’s best-known jockey, and he showed why once again with a superb weekend, bringing him a Performer of the Week award.

A G2 treble for FRANKIE DETTORI (+6pts, #4 from #7) means the Italian superstar makes his first appearance in the table of leading riders for 2019 races only, which is updated here: 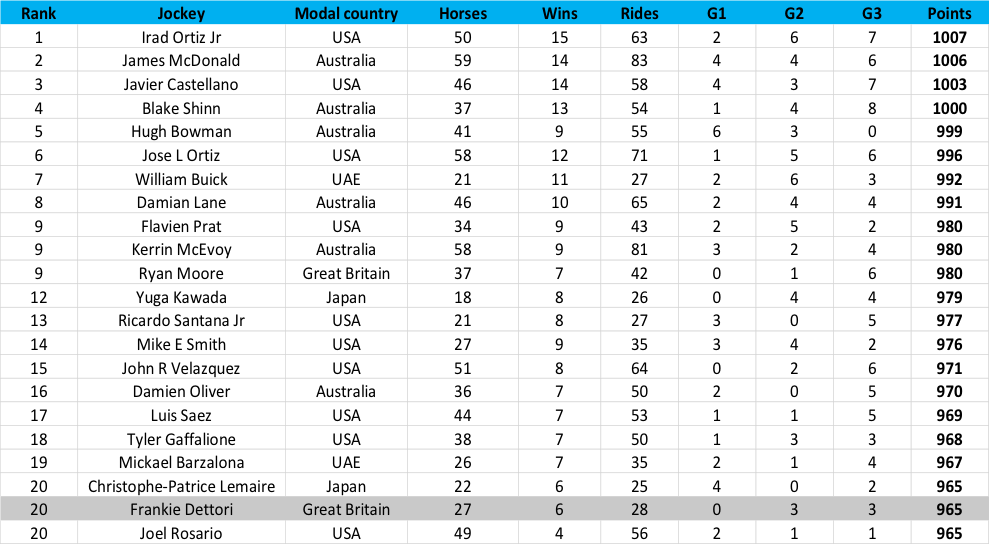 Dettori is now 6-28 (21%) on the young European season, returning to a ranking of world #4, which he may well improve upon in 2019. At York, Dettori scored on Lah Ti Dar in the Middleton Stakes and Stradivarius in the Yorkshire Cup, while in his native country he added the British-trained Capannelle winner Stormy Atlantic.

Dettori’s data broken down by season suggests that the 48-year-old is losing none of his edge while he has top quality horses to ride for his old ally, Newmarket trainer John Gosden (+4pts, stays #5). We also include highest Rank and maximum Points during each year:

Dettori’s ranking suffered due to him serving a six-month ban in late 2012, early 2013 after being found guilty of taking a prohibited substance, believed to be cocaine. Since then, he has never reached the position of being our world #1 but has peaked at either #2 or #3 every year.

With horses like the dual Arc heroine Enable and champion British stayer Stradivarius sure to give him more chances of top-flight honours, Dettori is set fair for another productive campaign.